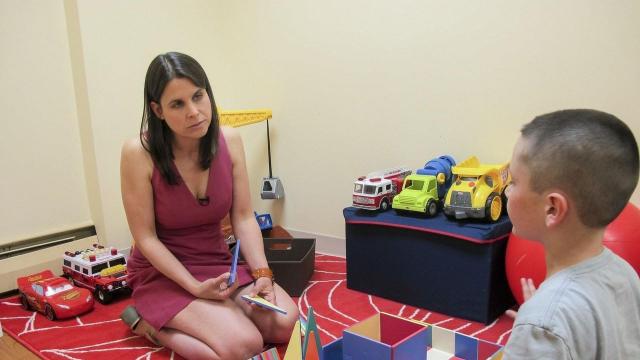 CNN — For most people, a visit to the doctor is fairly routine. But for individuals with autism, it can be a harrowing experience.

Autism causes greater sensitivity to one's surroundings, so an unfamiliar or busy environment like a doctor's office or hospital can be overwhelming. People with autism can have difficulties communicating, making it a challenge to answer questions or describe their symptoms to medical staff -- so problems can be harder to diagnose.

Dr. Wendy Ross wants to remedy this situation. As director of Jefferson Health's newly established Center for Autism and Neurodiversity, she's helping make health care more accessible to those on the spectrum.

"One would never put somebody in a wheelchair in a world without ramps, but that's what happens to my patients every day," she said. "So we're creating a ramp ... designed for autism."

According to the Centers for Disease Control and Prevention, about one in 59 children is diagnosed with autism spectrum disorder. As a developmental pediatrician, Ross realized how challenging life can be for children on the spectrum and their families. For nearly 10 years, she's made it her mission to help them participate in everyday activities -- like going to a museum, sporting event or traveling by airplane. Ross was honored as a Top 10 CNN Hero in 2014 for her work.

Now, she's turned her attention to health care. Working with Jefferson Health, she's begun to train all of the doctors and medical staff, giving them strategies to help them interact more productively with patients on the spectrum.

"Patients with autism ... may be more literal, they may not make as much eye contact, but they do have a lot to say, and if you can be a little more patient, it'll be really helpful," Ross said.

She also urges medical staff not to underestimate those on the spectrum.

"They might not be able to articulate things, but they certainly do understand," she said. "You always want to address the individual directly."

Additionally, Ross prepares patients before their visit, providing them with a step-by-step guide or "story" -- complete with visuals -- about what will happen during their appointment.

"When you go into a hospital or a health care setting, sometimes there's a lot of noise and chaos. When our patients come in, we provide them with noise-canceling headphones, little fidgets, if they get a little restless or anxious ... and special seating, to help prevent them from being overwhelmed by the sensory situation around them," she said. "We're really providing autism-friendly health care."

Eventually, she plans to expand this across the Jefferson Health system across Philadelphia and nearby New Jersey communities and create best practices so that others can follow suit.

For Ross, it's simply about helping those with autism participate in life to the fullest.

CNN's Gabe Kinder spoke with Ross about her work. Below is an edited version of their conversation.

CNN: Autism is often associated with children, but you've noted that this issue of health care is particularly important to adults on the spectrum.

Dr. Wendy Ross: When individuals with autism start to grow up, they age out of our pediatric health care system and our educational system. Frequently, they don't get as much preventative care as they could, so they tend to have more (disease) by the time problems are identified, and more mortality. It's really important to have a health care system that is able to meet their needs. Those with autism also have heart attacks or cancer or diabetes, so without doctors that can understand how to interact with them, they're not going to get appropriate health care.

CNN: How are people who are on the spectrum involved in your work at the hospital?

Ross: One of the things that I'm really excited about is that we're putting those with autism in leadership roles and including them in the development of our program.

Jennifer O'Toole was just diagnosed in her late 30s, and she's now a best-selling author on this topic. She told me one problem she's had is the pain scale -- how it's a bunch of different faces, and the one that looks the most in pain is how you identify how much pain you're in. But for someone on the autism spectrum, who doesn't often look at faces, that's not really a good way of monitoring their pain. Once, she was unable to explain to people how much pain she was in, and therefore did not get appropriate pain management. So that's a key example.

Another is my patient Alex Lepape. He was nonverbal until 16 and then he started to do a program known as letterboarding. So to communicate, he points to letters on a board. It turns out that Alex has an IQ that is very, very high and he's actually very articulate. Alex has really found a new sense of personhood since he's been able to communicate. He has a lot to say and he's chosen to be an advocate, both for himself and for others like him. So, he's really become a huge part of our program.

CNN: Your work will also benefit people who don't have autism. How?

Ross: Lots of people have some kind of a hidden disability -- traumatic brain injuries, the aging population, anybody with some kind of psychiatric illness -- and those people can use a bit of extra support. So, just like ramps are designed for wheelchairs but benefit those with walkers and moms with strollers, we're creating a ramp designed for autism that's going to benefit a whole lot of other people.

As Jennifer says, we're all on the human spectrum, so not judging people, being patient, providing some sensory support -- all of these strategies are really a part of good customer service and values. In a way, this is about treating people the way we should be treating everyone.