How law enforcement agencies can advocate for unhoused populations 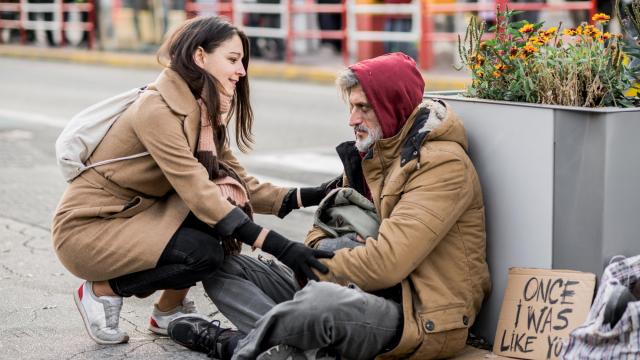 This article was written for our sponsor, Roy Taylor for Sheriff.

In 2019, North Carolina had 5,495 people in shelters and 2,268 unsheltered. According to the Raleigh Rescue Mission — a 501(c)(3) non-profit that deals specifically with homelessness in the Triangle — homelessness has steadily increased by 8% per year in Raleigh and Wake County.

At Wings of Armor, founder Christian Caldwell Riley has been supporting unhoused people across Raleigh since 2014. Through her work, she collects clothing, food and personal care items for those in need, distributing them across the Triangle area.

"We all need respect, and if we respect friends that live on the street, they'll give that respect back. We definitely need more resources. I get calls all the time — 'Ms. Chris, can I get food here? Can I get food there?'" said Riley. "It would be awesome if we could have some sort of transportation system for our friends experiencing homelessness so they could go to a food pantry or go get medication when they need it. If we could have a designated part of law enforcement to do that, that would be fantastic."

Riley stays busy visiting camps and shelters, handing out blessing bags filled with basic necessities and collecting clothing and items for drives. Every third Sunday of the month, Riley and other Wings of Armor volunteers head to downtown Raleigh to visit with people experiencing homelessness and hand out food and items.

With COVID-19 causing job losses across the board, houselessness in Raleigh became all the more apparent, according to Eric Preddy, president of Regional Proving Grounds and a ranking officer in a Wake County Police Department.

"You talk to Raleigh Rescue Mission, and they'll tell you, on average, around 7,000 people seek their services every year. It's estimated that there are as much as three or four times that amount that are actually out there and don't seek services," Preddy said. "You see people who had a life before, something happened to them and their situation just spiraled. They have these amazing stories, but they just don't have any resources."

According to Preddy, resources like the Raleigh Rescue Mission can help people experiencing homelessness, but partnerships between law enforcement and hospitals or mental health professionals could bring more aid to the community.

Already, the Raleigh Police Department has plans to address the problem.

"Raleigh is about to form a new unit specifically to deal with the homeless population and high-level mental health calls. The issue is so overwhelming that for the six or eight people that will be involved in this unit, they will be completely overwhelmed with the workload, so they're going to have to have some very realistic expectations about what they're able to do," said Preddy. "It may just be developing greater connections and networks with the people who can help them. It may be getting on a first-name basis with people who suffer from these situations, and offering them some assistance or partnering with other organizations who have resources to share."

Roy Taylor, chief of police for Capitol Special Police, litigation consultant and candidate for Wake County Sheriff, agrees with Preddy on the importance of partnerships. Taylor, who has written a position paper on addressing houselessness in Wake County, also sees a need to listen to the wants and needs of those without a home, and tailor solutions to what's best for them.

"Some of the people prefer living outdoors, so why would we force them to move inside — especially if we can provide resources for them to safely continue living the way they choose? One of my ideas is to work with local and government-owned properties to find places that will allow people to live on their property," said Taylor. "From there, maybe we can provide them with some basic services, like potable water and portable toilets. That way, instead of occupying city streets or government property, we could provide an encampment where they can safely do and live how they want."

In running for the office of sheriff, addressing houselessness in Wake County is a priority for Taylor.

As of now, Riley sees the relationship between homelessness and law enforcement as an area in need of improvement.

"We had one event where we set up shop in a big, old parking lot and a partner brought in something like 60 pizzas. I'm walking around the park, and I offer the police officer that was walking around an extra slice of pizza. He goes, 'Are you Chris Riley? I love what you do,'" said Riley. "The officer that I spoke to that Sunday was so kind and so appreciative of people coming to help. I would like to see officers have more of that compassion and more interaction."

Since Wings of Armor is a non-profit, it's not a source of income for Riley. Still, she's passionate about the work she's able to do — and even has plans to grow the operation. She hopes a positive relationship with law enforcement can help increase the reach of aid and resources.

In fact, Riley even echoes a plan similar to that of Taylor.

"Sometime in the future, I really want to buy property and create something almost like a community center, with little sheds, running water, that kind of thing," said Riley. "Then, because their social skills get put on the back burner, they would have to go to the community center to have meals, watch TV and do their laundry. They would also have classes on how to interview, how to write a resume, how to write a check, how to save money — all of those practical things."

"They're experiencing something that's temporary, and I think that there is a disconnect between law enforcement and people experiencing homelessness. They're scared of law enforcement because they're thinking they're going to come in and destroy their home," she finished. "We need to get on the same page, and in doing so, we can provide more services, more shelters and more resources."

For Preddy, increasing training can help lay the groundwork for young officers to better deal with homelessness. In doing so, they can provide real help by connecting people with resources or professionals especially suited to address their situations.

"Everybody has a story, and we should make a point to learn what that story is. A lot of times, if I would be in a marked unit, I would roll up and see a person on an intersection, and they would immediately think I was either coming to arrest them or check their permits," said Preddy. "In reality, I would just want to see who they are, because I see them there every day, and I want to know if there's anything I can do. A lot of times, those moments of connection and dignity can make all the difference."

This article was written for our sponsor, Roy Taylor for Sheriff.