How ISIS Produced Its Cruel Arsenal on an Industrial Scale 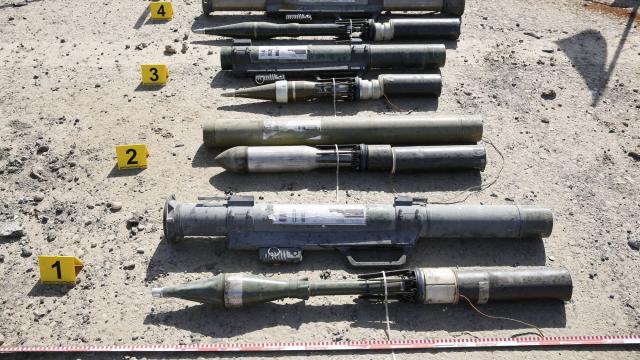 The improvised chemical rockets were the latest in a procession of weapons developed by the Islamic State during a jihadi arms-manufacturing spree without recent analogue.

Irregular fighting forces, with limited access to global arms markets, routinely manufacture their own weapons. But the Islamic State took the practice to new levels, with outputs “unlike anything we’ve ever seen” from a nonstate force, said Solomon H. Black, a State Department official who tracks and analyzes weapons.

Humanitarian de-miners, former military explosive ordnance disposal technicians and arms analysts working in areas captured from the Islamic State provided The New York Times with dozens of reports and scores of photographs and drawings detailing weapons the militant organization has developed since 2014, when it established a self-declared caliphate in Syria and Iraq.

The records show the work of a jihadi hive mind — a system of armaments production that combined research and development, mass production and organized distribution to amplify the militant organization’s endurance and power.

The resulting weapons, used against the Islamic State’s armed foes on many fronts and against civilians who did not support its rule, were variously novel and familiar. At times they were exceptionally cruel.

One report noted that before being expelled from Ramadi, Islamic State fighters buried a massive explosive charge under a group of homes and wired it to the electrical system in one of the buildings.

The houses were thought to be safe. But when a family returned and connected a generator, their home was blown apart in an enormous blast, according to Snoor Tofiq, national operations manager for Norwegian People’s Aid, which is clearing improvised weapons from areas that the Islamic State left. The entire family, he said, was killed.

The heaters and generator, useful to displaced civilians and combatants alike, were packed with hidden explosives. The bombs had been configured, McInally said, so that if a person approached them or tried to move them, they would explode.

Taken together, the scope and scale of Islamic State production demonstrated the perils of a determined militant organization allowed to pursue its ambitions in a large, ungoverned space.

The findings also included apparent prototypes of weapons that either were not selected for mass production or were abandoned in development, including projectiles loaded with caustic soda and shoulder-fired rockets containing blister agent.

While the Islamic State has been routed from almost all its territory in Iraq and Syria, security officials say its advances pose risks elsewhere, as its members move on to other countries, its foreign members return home and veterans of its arms-production network pool and share knowledge and techniques online.

“They’re spreading this knowledge all over the world,” said Ernest Barajas Jr., a former Marine explosive ordnance disposal technician who has worked with ordnance-clearing organizations in areas occupied by the Islamic State. “It’s going to the Philippines, it’s in Africa.” He added, “This stuff’s going to continue to grow.”

One reason for the Islamic State’s level of sophistication was clear: Its armaments programs grew out of the insurgencies fighting the U.S. occupation of Iraq from 2003 through 2011.

The Islamic State, which evolved from al-Qaida in Iraq, built upon its predecessors’ lethal industry. (BEGIN OPTIONAL TRIM.) The group’s larger success since also played a role. When the Islamic State seized swaths of territory and major cities in 2014, it took control of shops and factories with hydraulic presses, forges, computer-driven machine tools and plastic injection-molding machines. It also moved into at least one technical college and university lab. This infrastructure positioned the Islamic State for an arms-production breakout.

Behind the capacity was an armaments bureaucracy that supervised product development and manufacture, said Damien Spleeters, head of operations in Iraq and Syria for Conflict Armament Research, a private arms-monitoring and investigative firm that has done field work in both countries during the war.

The system was resilient, Spleeters said. One of the Islamic State’s projects, a series of recoilless launchers that gained prominence late in the battle for Mosul, in northern Iraq, was built from the ground up even while militants were pressured in combat from multiple foes on multiple fronts.

“It just kept going,” Spleeters said of the technical advancements. “They could develop stuff even as they lost territories.”

The Islamic State’s arms bureaucracy was also disciplined. Detonating cord used in improvised explosive devices was measured and allotted down to the centimeter, Spleeters said. When a stock ran out, management would fill out a request form for more. The material would be resupplied.

As de-miners have found weapons, he said, they have routinely encountered improvised devices with a modular design that allowed for the Islamic State’s fighters to choose from uniform parts and assemble devices quickly. The separate parts were issued distinctly, to be combined before use.

The New York Times is withholding technical details of weapons and explosive mixtures described in this article to prevent the spread of information useful to copycats.

Barajas said the explosive charges themselves were further standardized — via a “homemade explosive” with a recipe the group tweaked and produced at an industrial scale.

The mixture, he said, is a widely known combination of ammonium nitrate fertilizer and aluminum with a long history of use in many conflicts, including in Iraq. But the Islamic State improved the explosive with the addition of another material that makes it easier to detonate. The Times previously documented the Islamic State’s importation of large amounts of ammonium nitrate from Turkey, along with sections of heavy pipe. (BEGIN OPTIONAL TRIM.) McInally said the group also standardized other items: supplemental charges for mortar rounds to extend their range; a common fuze with a spring-loaded striker assembly machined from an over-the-counter bolt; and an improvised bomb — he said de-miners refer to it as a land mine — that was fielded in a standard-sized plastic tub.

The mines resemble an Italian-made anti-personnel mine called the VS-50, though the Islamic State’s version is much larger, prompting de-miners to dryly refer to it as the “VS-500.”

As time passed, newly produced VS-500 mines became increasingly water-resistant, extending their life in the ground. Similarly, the striker fuzes the Islamic State has fielded show signs of being made resistant to moisture and rust.

The first-generation land mines, McInally said, were not well made. “They didn’t weather well,” he said. But by the time the Islamic State was defeated in Mosul, he said, it had improved the design and salted the battlefield and villages with weapons “that last a long, long time.”

(END OPTIONAL TRIM.) The Islamic State has also engaged in organized scavenging, including collecting dud U.S.-made bombs dropped by coalition warplanes and repurposing their explosive power. One set of photos provided by a de-miner shows how the group set up an open-air chop shop to cut open unexploded U.S. aircraft bombs and remove the explosive inside.

These explosives tend to be more powerful and more reliable than homemade explosives. Barajas said the Islamic State put what it had scavenged to priority use — in suicide attacks.

“Every time I’d run an explosive test on the ordnance buried in the ground, if I found it connected to the pressure switches, it would come back as ‘homemade explosives,'” he said. But the explosives in suicide vests and belts, he added, were compounds, including RDX and TNT, extracted from conventional ordnance.

Not all the Islamic State’s developments have been effective. When experimental designs failed, Islamic State engineers made changes or moved on.

According to a U.S. government official who examined an analysis of the rocket-propelled grenade filled with blister agent, the weapons would probably not fly a predictable and accurate path. X-rays, he said, showed that they had been only partly filled, and were unbalanced. (BEGIN OPTIONAL TRIM.) Similarly, the Islamic State seemed to struggle with a series of mortars filled with caustic soda, or lye, a strongly alkaline compound that is sold in a heavy flake form and sometimes used as a drain cleaner.

Dozens of locally produced mortar projectiles filled with caustic soda were found by de-miners in Manbij, Syria, in late 2016. Barajas analyzed the discovery.

“Caustic soda is extremely hazardous. It’ll burn your skin,” he said. “If you inhale it, it’ll cause death.” But the material is also corrosive, so much so that it damaged the interior of the shells the Islamic State had used to hold it.

He said the Islamic State tried loading 120-millimeter mortar rounds with caustic soda, but the munitions rusted to the point of exuding salts. They could not be safely fired. “I think once they got this bad reaction, they moved away from this,” Barajas said.

Many of the Islamic State’s bombs have been used against the military and police forces fighting it. Aso Mohammed, a Kurdish de-miner with the Swiss Foundation for Mine Action, said that by his estimates, improvised explosive devices have been responsible for 60 percent of casualties of Kurdish peshmerga soldiers in Iraq’s north.

But other uses were consistent with the Islamic State’s well-documented disregard for international law and humanitarian concerns evident in their abductions, public executions, production of snuff films and bombings of public spaces.

In a prepared statement, the U.S. military in Baghdad noted that coalition forces have recovered and destroyed booby-trapped teddy bears. De-miners and their supervisors in Iraq frequently trade reports and details of other Islamic State-made booby traps, among them dolls, stuffed animals and plastic trucks, as well as teapots, fire extinguishers, flashlights and copies of the Quran.

Two de-miners, Steve Kosier and Mohammed, of the Swiss demining organization, said the Islamic State’s locally made weapons had evolved in a predictably sinister fashion. Improvised devices that once were connected to a single plate that would cause the bomb to explode were later in the campaign connected to several plates — an adaptation intended to slow de-miners as they cleared buildings, roads and terrain.

Kosier said he had disabled one makeshift bomb that “had four pressure plates surrounding the container with a 9-volt battery for each plate.” Each plate was connected by a separate electrical circuit to a container of homemade high explosives, which in turn had an “anti-lift device” beneath it — essentially a booby trap added to an already complex booby trap.

The ambition behind such a trap, de-miners said, is to kill people trying to make the Islamic State’s former turf safe.