How Car Rentals Explain the 2021 Economy 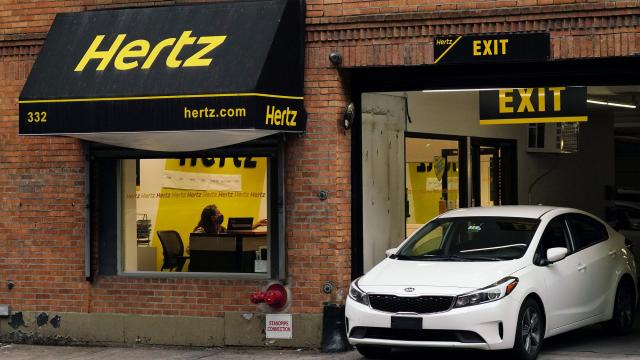 Few markets better crystallize the topsy-turvy nature of the American economy during the pandemic than the rental car business.

The industry shows how economic decisions made in 2020 keep having serious implications in 2021. While most other industries have experienced less severe swings, the same basic dynamics apply. These dynamics explain why inflation and product shortages spiked earlier in the year — and why they are starting to abate but are not yet close to pre-pandemic norms.

In the spring and summer of 2020, the industry was in a state of collapse as people stopped traveling. With a glut of cars — a much higher supply of rentals than demand — prices plummeted; major rental car companies sold off hundreds of thousands of vehicles; and Hertz went bankrupt.

The price to rent a car or truck was 23% lower in May 2020 than it was before the pandemic started.

Fast-forward a year, and millions of vaccine jabs later, and Americans were ready to travel again — but the rental car industry was stuck with its diminished fleets. And it faced challenges replenishing those fleets quickly, because automakers were facing supply constraints of their own because of production rollbacks in 2020.

“In the spring of 2020, nobody really knew what to expect,” said Neil Abrams, president of Abrams Consulting Group and a former Hertz executive. “In my 45 years in this industry, nobody had ever seen anything quite like it. I’ve seen cycles, recessions, peaks and valleys, but nothing quite like this. The guys that had to make the big strategic decisions really had no precedent.”

But ultimately, “demand came back a lot quicker than I think anybody anticipated, especially on the leisure side,” he said.

With demand surging and the supply of cars still depressed, rental car companies hiked prices. At the peak on June 19 this year, the average price of a rental car excluding taxes and fees was $123 a day, according to the transportation app Hopper, up from less than $50 at the start of the year.

But high prices have a funny way of fixing themselves, at least to some degree. Those considering renting will toy around with different modes of transport if rental cars become very expensive. Some may decide to optimize their itinerary by using a mix of Uber or public transit to get around. Others may turn toward alternatives like Turo or even U-Haul for a car.

That is all the more true for leisure travelers, who tend to be more price-sensitive than business travelers.

“If people can’t afford it, they will adapt,” said Ani Malkani, head of ground transport at Hopper. “Money is not infinite; you have to make decisions based on the money you have.

The calculation that consumers make for their vacations might be the release valve for pent-up price pressures.

Meanwhile, the arrival of the delta variant might have curtailed some planned travel, especially business travel, reducing demand. And the end of the busy summer travel season, and the gradual rebuilding of rental car fleets, has brought the market back into something closer to its normal equilibrium — though only somewhat closer.

The decline in prices varies significantly across the country. Cities that tend to get lots of summer travel — like San Diego, Miami and Tampa, Florida — have seen the most significant drops. In late June, an average rental in those cities cost more than $100 a day. Now they can be had for as little as $50. Cities like New York, Los Angeles and San Francisco have seen prices decline by about one-third. On the supply side, automakers have struggled to increase production because of microchip shortages. Ultimately rental companies are in competition with ordinary drivers for a limited supply of new cars, and new cars are scarce.

Abrams, the rental car industry consultant, expects some of the shifts that have taken place in the industry — including higher prices — to be lasting. The companies are finding the new equilibrium, with higher prices and smaller fleets, to be profitable. And the experience of the pandemic will leave companies wary of making themselves vulnerable to bankruptcies such as the one Hertz experienced. (Hertz found buyers and emerged from bankruptcy in early summer.)

“When an industry goes through this kind of trauma, it comes out smarter and more efficient than it was prior to the trauma,” Abrams said. “The industry has learned how to do business a different way, and I think the customer is going to get used to this paradigm shift in how cars are rented and how they’re priced.”

The story of rental car prices, while unique in its way, is a vivid example of dynamics that apply across many other goods. The shortages of 2021 were in large part caused by a combination of supply decisions made more than a year ago that can’t be undone, and demand conditions that returned to normal with speed that few expected.

Markets are quite effective at doing their job of finding equilibrium. When prices get as high as they did for car rentals in June, it destroys demand. People will figure out another plan. But just because prices moderate doesn’t mean they have to go back to their pre-pandemic level, and some of the change that has happened may turn out to be surprisingly long-lasting. This article originally appeared in The New York Times.