How and When to Talk to Your Children About Money 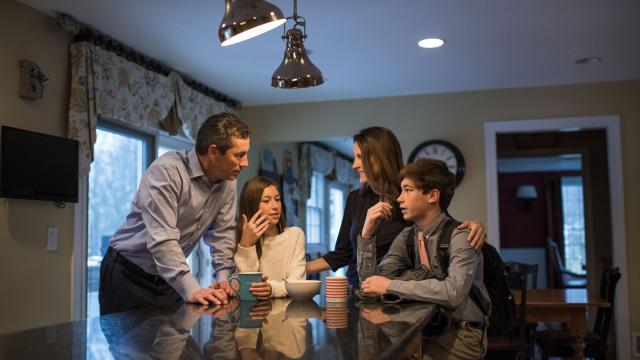 Jennifer and David Buckwald, who live in Colts Neck, New Jersey, struggled with how to impart their financial values to their two children.

Both wanted to ensure that their children, ages 14 and 12, were motivated to succeed in their own right. David Buckwald, in particular, was concerned their children would think the affluent town where they live, an area of horses and golf clubs, was reflective of the wider world.

But even though they both work in finance and hold degrees in psychology, they didn’t know exactly how to approach a conversation about money and more broadly about financial and family values. This year, they decided to change that.

“We know the importance of planning, and we have every insurance under the sun,” Jennifer Buckwald said. “But we never sat down and talked about our values — what’s important about making money and saving money?”

David Buckwald conceded it was not easy: “It was a chore, at first. The kids didn’t want to do this.”

Gathering the family around the Thanksgiving dinner table is a great opportunity to impart family values and lessons around money. Not only is the family beholden to come together, but this is the time of year when many people make their annual charitable gifts. Money is on their minds.

But holidays can be fraught with emotion, so experts say it might be better to take smaller steps, like setting a later date to talk to children and grandchildren.

Regardless of when the talk is done, experts say families need to approach these conversations with a plan and a willingness to listen as much as talk.

The first step for parents is to overcome their reluctance to talk about financial matters with their children, a discussion perhaps second only to the birds and the bees in terms of the discomfort it generates.

“Talking about family money is similar to talking to kids about sex,” said Jeff Savlov, founder of Blum & Savlov, a family business consulting firm. “There is such a thing as too much, too soon.”

Once past that hurdle, a good place to start is family stories. “Our family stories helped shape us into what we are today,” said Donna Skeels Cygan, president of Sage Future Financial, an advisory firm. “It is important to acknowledge which family members had a very positive impact on our childhood.”

These stories work better, though, when they’re not just focused on joy or success. David Buckwald said he told stories about his financially challenging childhood. But as part of an exercise with Savlov, David Buckwald also told his children about a relative who ran a speakeasy during Prohibition. Being explicit with the lessons works well. Stephanie Eras, an engineer in New Mexico, said she used the benefits package offered by her daughter’s part-time job at Panera Bread as an opportunity to discuss savings.

As an inducement for her daughter to save the maximum amount allowed in the company’s 401(k) plan, Eras matched her daughter’s contribution. She also shared stories about her father and mother, who lived frugally.

“My mom didn’t tell us, ‘You must go to college and get a good job.’ She said, ‘You need to get a job with benefits,'” Eras said. “Those lessons taught me to live within my means.”

When her daughter announced that money wouldn’t buy them happiness, Eras pointed out that although that was true, money bought the things that they needed and wanted. “I listed them,” she said.

Lisa Bealhan, who lives in Albuquerque, New Mexico, said she was always ready and willing to talk to her three stepdaughters about financial decisions. But she would wait for the right moment.

“I learned a long time ago that if they ask you for advice, give it a gentle way,” she said. “But if they don’t ask, wrap your head in duct tape if you have to, but say nothing.”

Yet she and her husband, Scott, who died this year, led by example. They had owned a booming custom home business in the Southwest, developing entire subdivisions. He had been the president of the homebuilders association.

“We created a lot of wealth,” she said. “We didn’t spend beyond our means. We drove nice Toyotas, but we didn’t drive Mercedes. We could have afforded the Mercedes. But it wasn’t something we cared about.”

Your children will almost invariably figure out how much your home and cars cost — thank the internet for that — and they may also view those assets in comparison to what their friends have. But deciding when to tell them how much you make is up to you, and it may be years before they have the maturity to understand what that number means.

David Buckwald said his teenage son often asks him how much he earns, but he is not ready to tell him. Yet as a family, they have started to talk about expenses, including their grocery bill.

“We use concrete numbers,” Jennifer Buckwald said. “It’s almost empowering to them.”

Any of these talks will require intentionality. Savlov plays a game with families where he lines up 100 pieces of licorice on a table. He then leads a discussion about all the people in the world who have less and more than they do. At the end, he asks them to remove licorice sticks to show where their family stands financially in the world.

“Invariably, they leave between five and 10 pieces of licorice on the table,” he said. “But whatever is left, I’ll take them away, until I get it down to one, and then I take out a pair of scissors and cut one in half and half again and half again. It comes down to this little speck and then I say, ‘How does this strike you?'”

The exercise allows a logical entry into a conversation about wants and needs.

Despite the benefits of talking to children about money, people put off these talks. The risk is that at a certain point, parents feel they cannot have those conversations once their children become adults.

Janet and Bob Serier, a New Mexico couple both married for the second time, said they fell into that category with their three sons from their first marriages. The couple was able to stop working in their 50s and they are living comfortably in their early 70s.

But they have started trying to impart the financial lessons they wished they had shared with their children to their grandchildren.

Janet Serier said when her children were young, she was divorced and focused on her career to provide for them. “I’m not sure I ever said anything to them directly,” she said.

But her grandsons have given her a second chance. “They listen to you,” she said. “Grandchildren look up to their grandparents. We find we’re less inhibited.”

Sometimes, though, children have to start the talk with their aging parents. These are not conversations about family values so much as they are pragmatic assessments of a parent’s need for care and support — and who is going to provide it.

It might be best to focus on a series of planning behaviors, like making sure financial and health care documents and passwords are organized, and having discussions about who will manage their affairs, said Ronald Long, head of regulatory affairs and elder client initiatives at Wells Fargo Advisors.

“Skip the Black Friday shopping and spend a half an hour talking to each other,” Long said.

That’s good advice at any age.