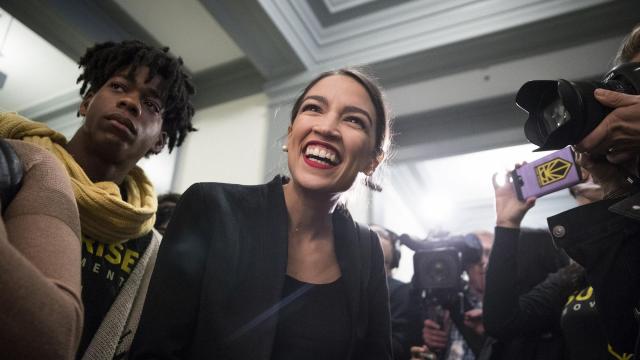 Last Friday, three days after being elected to the House of Representatives, Alexandria Ocasio-Cortez invited more than 600,000 people to chat as she made loaded macaroni and cheese in an Instant Pot.

Ocasio-Cortez, D-N.Y., was streaming on Instagram Live, answering questions submitted through the live chat feature as she grated cheese and sang along to Janelle Monáe. It wasn’t too surprising to see her there, as her followers have watched each step of her journey since she announced she would be seeking a congressional seat in April 2017.

Over the past week, Ocasio-Cortez has taken these followers behind the scenes of congressional orientation, as she’s visited monuments, met with other incoming freshmen and looked through the new member directory — which she joked was like a yearbook.

“At orientation you get a swag bag,” she said in one story, displaying a shopping bag that she explained held her new secure devices. In another, she walked between government buildings, whispering, “Guys, there are secret underground tunnels,” adding in a caption, “Jk they’re not secret but it’s cool.”

But Ocasio-Cortez, who at 29 is the youngest woman ever elected to Congress, is especially good at connecting with her followers on Instagram, which can be a more intimate platform — especially when a user speaks directly to the camera.

The video quality isn’t great, the audio can get muffled and the lighting can be overexposed. But that’s partly the point. Using her cellphone’s forward-facing camera, Ocasio-Cortez provides civics lessons and discusses her personal highs and lows.

The videos seem designed to be accessible to everyone. Ocasio-Cortez has started using a closed-captioning tool called Clipomatic so that those who are deaf or hard of hearing can follow along.

Ocasio-Cortez is also an active user of Twitter, the preferred clap-back platform. On Thursday, a reporter from the Washington Examiner tweeted a picture of Ocasio-Cortez’s back with the caption, “I’ll tell you something: that jacket and coat don’t look like a girl who struggles.” It was one of several recent attempts by conservative media to portray her as wealthier than she says she is.

He later deleted the tweet, but not before Ocasio-Cortez responded. She replied to her initial tweet with another, tagging the reporter, Eddie Scarry, and including a screenshot of his original tweet. “Oh, does @eScarry think he can delete his misogyny without an apology? I don’t think so. You’re a journalist — readers should know your bias.”

And she has company among her fellow incoming freshmen. After Rep.-elect Ilhan Omar, D-Minn., arrived in Washington this week, she tweeted, “We did not come to play,” along with a link to a story in The Cut. The headline: “Your Cool New Congresswomen Are Already Hanging Out.”

Like Snapchat stories, Instagram stories are ephemeral and automatically delete after 24 hours. But users can save stories and pin them to their pages as a “highlight,” allowing followers to watch a story weeks after it was published.

Three months ago, Ocasio-Cortez made an Instagram story in which she spoke about how she was feeling. That story, labeled “Pep Talk,” is pinned to the top of her page as a highlight.

At one point, she sighed deeply and said, “You’re supposed to be perfect all the time on every issue.”

“I think what people forget is if we want everyday, working-class Americans to run for office, and not like these robots, that we have to acknowledge and accept imperfection and growth and humanity in our government,” she added.

Ocasio-Cortez did not respond to requests for an interview.

Some have dismissed her Instagram use as merely an example of a young person knowing how to use a platform. But it’s not that simple, said Jennifer Grygiel, an assistant professor at Syracuse University who studies social media.

“Very few people can get away with wearing those animated Instagram glasses but also be taken seriously,” Grygiel said. “She can command both spaces.”

In 2018, social media skills are expected of political figures and their teams.

Sen. Ted Cruz of Texas is a top Instagram user among Republican politicians, with a following of nearly 280,000. But his Instagram presence is distant, filled with professional photography and text cards that do not lend themselves to a sense of authenticity.

According to an analysis in The New York Times, the number of interactions on Democrats’ Instagram accounts dwarfed those on Republican accounts within a 30-day period ending Oct. 15. The political tilt of Instagram reflects the demographics of the platform’s users: Instagram users skew younger, as do Democratic voters.

One of Ocasio-Cortez’s biggest strengths on Instagram is that she tries to bring her followers into the political process and convince them that they, too, could someday be in her shoes.