A stalker could be hiding in your pocket 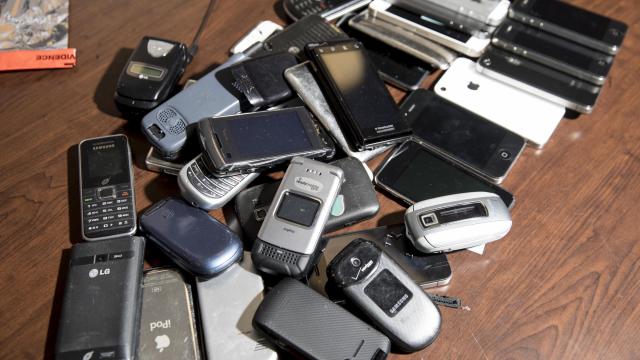 KidGuard is a phone app that markets itself as a tool for keeping tabs on children. But it has also promoted its surveillance for other purposes and run blog posts with headlines like “How to Read Deleted Texts on Your Lover’s Phone.”

A similar app, mSpy, offered advice to a woman on secretly monitoring her husband. Still another, Spyzie, ran ads on Google alongside results for search terms like “catch cheating girlfriend iPhone.”

As digital tools that gather cellphone data for tracking children, friends or lost phones have multiplied in recent years, so have the options for people who abuse the technology to track others without consent.

More than 200 apps and services offer would-be stalkers a variety of capabilities, from basic location tracking to harvesting texts and even secretly recording video, according to a new academic study. More than two dozen services were promoted as surveillance tools for spying on romantic partners, according to the researchers and reporting by The New York Times. Most of the spying services required access to victims’ phones or knowledge of their passwords — both common in domestic relationships.

Digital monitoring of a spouse or partner can constitute illegal stalking, wiretapping or hacking. But laws and law enforcement have struggled to keep up with technological changes, although stalking is a top warning sign for attempted homicide in domestic violence cases.

“We misunderstand and minimize this abuse,” said Erica Olsen, director of the Safety Net Project at the National Network to End Domestic Violence. “People think that if there’s not an immediate physical proximity to the victim, there might not be as much danger.”

Statistics on electronic stalking are hard to find because victims may not know they are being watched or they may not report it. Even if they believe they are being tracked, hidden software can make confirmation difficult.

But data breaches at two surveillance companies last year — revealing accounts of more than 100,000 users, according to the technology site Motherboard — gave some sense of the scale. The tracking app company mSpy told The New York Times that it sold subscriptions to more than 27,000 users in the United States in the first quarter of this year.

According to data published last year by the Centers for Disease Control and Prevention, 27 percent of women and 11 percent of men in the United States at some point endure stalking or sexual or physical violence by an intimate partner that has significant effects. While comprehensive numbers aren’t available on domestic abuse cases involving digital stalking in the United States, a small survey published in Australia in 2016 found that 17 percent of victims were tracked via GPS, including through such apps.

In a Florida case, a man named Luis Toledo installed an app called SMS Tracker on his wife’s phone in 2013 because he suspected she was having an affair. “He said he was able to see text messages and photos his wife was sending and receiving from others,” Sgt. A.J. Pagliari of the Volusia County Sheriff’s Office recalled.

This January, Toledo was sentenced to three consecutive life terms after being convicted of killing his wife, Yessenia Suarez, and her two children. Pagliari said Toledo told him he installed the app several days before her death. “With the use of the app, Toledo was able to confirm his suspicion,” the sergeant said.

Representatives for SMS Tracker, made by the Dallas-based Gizmoquip, did not respond to requests for comment about the app’s role in the case. A recent review on the Google Play store for SMS Tracker tells potential users: “I would recommend if you think your partner is cheating.”

An Opening for Abuse

There is no federal law against location tracking, but such monitoring can violate state laws on stalking. Spying on communications can violate statutes on wiretapping or computer crime. And knowingly selling illegal wiretapping tools is a federal crime.

But it’s not illegal to sell or use an app for tracking your children or your own phone. And it can be difficult to tell whether the person being surveilled has given consent, because abusers frequently coerce victims into using such apps.

In Everson, Washington, for example, Brooks Owen Laughlin is accused of beating his wife and using an app typically used for benign purposes, Find My iPhone, to control her movements.

“If she would turn it off, he would instantly call her or text her and say, ‘Why did you turn that off? What are you doing?'” Chief Daniel MacPhee of the Everson Police Department said in an interview. Laughlin pleaded not guilty in April to charges of assault, harassment and stalking.

The technical and legal ambiguity has created an environment in which tools are marketed for both legal and illegal uses, without apparent repercussion.

“There are definitely app-makers that are complicit, seeking out these customers and advertising this use,” said Periwinkle Doerfler, a doctoral student at New York University and an author of the study on apps, which will be presented in the coming days. “They’re a little bit under the radar about it, but they’re still doing it.”

The researchers, from NYU, Cornell University and Cornell Tech, contacted customer support for nine companies with tracking services. The researchers claimed to be women who wanted to secretly track their husbands, and only one company, TeenSafe, refused to assist.

An app largely aimed at parents, KidGuard bought ads alongside Google results for searches like “catch cheating spouse app.” A spokesman for the business, based in Los Angeles, said in an email that the company worked with third-party marketers and customer service reps who had been “testing new strategies.” It deleted blog posts about tracking romantic partners and said it did not support that activity. Spyzie, another app that ran such ads, did not respond to requests for comment.

On YouTube, dozens of videos provide tutorials on using several of the apps to catch cheating lovers. The videos frequently link back to the app-makers’ sites using a special code that ensures the promoter will get a cut of the sale — a type of deal known as affiliate marketing. Affiliate marketing also appeared on multiple websites that discussed using surveillance apps to track romantic partners. One site, spyblog.ml, had posts about spying on “loved ones” and linked to mSpy. The app company said that its terms of service prohibited illegal activity and that it would block the site from its affiliate program.

Reviews and online discussions about the apps suggest that the market for spying on spouses has been important to the businesses. FlexiSPY, an app company, posted survey results on its site showing that 52 percent of potential customers were interested because they thought their partners might be cheating. Asked about the results, the company said the data was five years old and “no longer relevant.” Androids and iPhones

The proliferation of such tracking apps raises questions about the role of businesses like Google and Apple in policing their services. The two companies, which run nearly all smartphones in the United States, have long taken different approaches to regulating apps.

Apple makes it difficult for iPhone users to download apps from outside the company’s App Store and has many restrictions on what apps in its store can do. After testing several programs available in the stores on both platforms, the researchers found that Apple’s strict rules resulted in more limited surveillance capabilities on those apps than those running Google’s software.

Many App Store apps offered location tracking for phones. But for more intrusive surveillance, spying companies had to work around Apple’s restrictions by using the victim’s name and password to get data. To combat misuse by predators, an Apple spokesman said, the company urges people to use a tool called two-factor authentication to help protect their accounts even if their passwords are stolen.

Google prides itself on being more open. Its smartphone software, Android, allows people to install apps from anywhere, and the most invasive ones were found outside the company’s app store, Play.

The researchers found two apps in the Google Play store that allowed the app icon to be hidden from victims and the camera to run without notifications, as well as a handful of others that tracked users’ locations without telling them — all apparent violations of Google’s rules. “They’re not enforcing their own policies,” Doerfler, the NYU researcher, said. “If someone reports it then they’ll take it down, but it’s not something they are checking within their operating system.”

In response to the researchers’ findings, Google tightened several policies “to further restrict the promotion and distribution” of surveillance apps, a company spokesman said. The company provides funding to the NYU team that helped conduct the study.

Google removed many spying and tracking apps and blocked advertising on search results about spying on spouses and romantic partners. YouTube, owned by Google, took down some videos about spying services, although the company determined that others didn’t violate its policies because the services could be used with consent.

Many law enforcement agencies don’t have the computer skills to quickly help survivors, or they don’t devote forensic resources to domestic abuse and stalking cases, which in many states are misdemeanors.

One sheriff’s department, in Dakota County, Minnesota, is trying to tackle the problem of abusive digital surveillance and has used Justice Department grants to hire a forensic specialist for the task. The sheriff, Tim Leslie, said that from 2015 to 2017, the department went to court in 198 cases involving technology and stalking or domestic abuse, on par with earlier years. Its conviction rate rose to 94 percent from 50 percent, with many more suspects pleading guilty instead of contesting the charges, he said.

In one case, the specialist analyzed a woman’s phone and found it had a program on it called Mobile Spy, bought using her then-husband’s email address. The specialist could see that it had been launched 122 times. The effect of the stalking was “profound,” the woman said.

Even though it had been more than a year since the app had last been used, the man was charged with misdemeanor stalking and pleaded guilty in 2015.

“We go after the misdemeanor stuff pretty hard, in the theory that if you stop that, it doesn’t escalate,” Leslie said. Federal cases involving such spying are rare. The Justice Department in 2014 charged the maker of a spying program called StealthGenie under a wiretap law that prohibits advertising and selling a device for “surreptitious interception.” The developer paid a $500,000 fine, shut down StealthGenie and was sentenced to time served.

Victims’ advocates said they noticed after the case that makers of surveillance tools changed their tactics, sometimes moving computer servers overseas or scrubbing explicit language about spousal spying from their websites. “As soon as these companies caught wind that they shouldn’t be doing it, they just changed their marketing,” Olsen said.

One app-maker told The Times that he hired a legal team after the StealthGenie case to help him avoid running afoul of the law. “There were a few modifications we had to make,” said Patrick Hinchy, the founder of New York-based ILF Mobile Apps, which makes Highster Mobile and other services. Several apps, he said, removed call recording and delayed the availability of the data by 10 to 15 minutes. Hinchy said the company only provided assistance to customers that it believed was legal.

When a researcher recently contacted the company and asked, “If I use this app to track my husband, will he know that I am tracking him?” the representative responded: “Our software is undetectable from the home screen.”