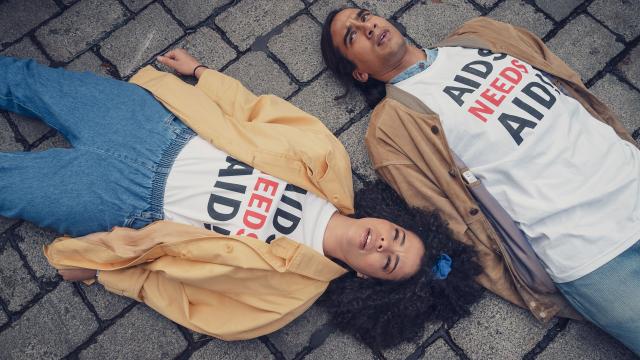 CNN — A man lies alone in a hospital bed, frightened and cut off from most of his family and friends, while the outside world grapples with the growing threat of an unfamiliar virus. As he lies stricken, he is cared for by doctors and nurses dressed head to toe in PPE. Eventually he begs for his mother to make him better and asks her through tears if everyone who has contracted this disease has died.

But this isn't a sequence in a news report from an overwhelmed Covid ward. The year is 1985 and this is a scene from "It's a Sin," a searing British television miniseries that explores the AIDS crisis over a ten-year period through the lens of those that lived it.

The parallels between the devastation wreaked by AIDS and the tragedy of Covid-19 today are clear. Thousands of lives lost, people dying alone in hospital, denied the opportunity to say goodbye to loved ones, with only medical staff to offer comfort in their final moments. Funerals devoid of crowds of mourners, misinformation and confusion over the surging crisis spread rapidly across the globe.

But -- when it comes to the public health response -- have governments and politicians learned the lessons of the past?

Marc Thompson, who was diagnosed with HIV in 1986 at the age of 17 and now works promoting public health in underserved communities in the UK, doesn't think so. "I have yet to speak to a government minister working on the Covid response who has asked the question as to what we have learned from the HIV and AIDS crisis," says Thompson.

Even if the comparisons are obvious, the context is different. At the peak of the AIDS crisis, many victims died alone, not because of contamination fears -- though those certainly existed -- but, as writer Russell T. Davies' series makes clear, because of shame.

Funerals for Covid-19 victims are so sparsely attended because coronavirus thrives at social gatherings, regardless of whether their purpose is to commemorate or celebrate. Many AIDS victims were buried alone simply because of the stigma attached to those who contracted the disease.

When one of the gay characters in Davies' show dies of complications from AIDS, their family gathers to burn clothes, photographs, books and memories, as a way of excising them -- and the shame that was so commonly associated with the condition -- from their lives.

There are striking contrasts between the crises, too.

"Only when the UK government woke up to the fact that the straight population would be at risk [from AIDS] did they actually finally speed up their response to the threat of the crisis," says Lisa Power, a co-founder of Britain's foremost LGBT lobby group, Stonewall, and an adviser on "It's A Sin."

HIV and AIDS campaigners in the UK say that the fact the response to coronavirus has been significantly more timely than the reaction to AIDS comes down to widespread homophobia and a societal and political disregard for marginalized groups.

"ACT UP and Larry Kramer used to refer to AIDS as a genocide by neglect," says Ben Weil, an activist and PHD researcher on the exclusion of gay men from blood donation programs at UCL's department of science and technology in London. "Covid is a genocide of the clinically vulnerable and disabled by neglect."

Power says the press in the 1980s and 1990s fostered a culture of shame around HIV and AIDS, while the (mistaken) belief that heterosexuals were not at risk encouraged a lackluster reaction on the part of the UK and US governments, led at the time by Prime Minister Margaret Thatcher and President Ronald Reagan.

"The press, and the tabloid newspapers in particular, were essentially saying that this disease would only affect gay people and 'junkies' [intravenous drug addicts] and it wasn't something to worry about because they don't matter," Power says.

Weil agrees that the media -- on both sides of the Atlantic -- has played a key role in influencing the seriousness and speed with which the two diseases were approached. "When 100,000 people died of Covid in the US, it was the front page of The New York Times, but it took a number of years and many AIDS-related deaths for them to make the AIDS crisis a leading story," Weil says.

He argues that the fundamental difference between the responses to AIDS and to Covid-19 has turned on who society in general, and particularly those in power, believe deserve protection. "All risk is political," says Weil. In the early stages of the AIDS crisis, gay people were seen as not worthy of priority. In the early stages of the coronavirus pandemic, many nations were slow to respond to the threat at residential facilities for the elderly, with devastating consequences.

For those who have lived through both crises -- particularly those who remain part of the battle against the stigma surrounding HIV and AIDS, the huge contrast in responses, highlighted by "It's a Sin," is telling -- but it is the similarities, and the repetition of past grave mistakes, that worry them most.

It is a strange time to watch "It's a Sin," says Thompson. It is simultaneously an "emotional, occasionally triggering watch and a fun one," he says. The series -- met with wildly enthusiastic reviews in the UK since its launch in January -- will stream on HBO Max in the US from February 18. (CNN and HBO share the same parent company, WarnerMedia.)

Throughout the series, there is exuberance and euphoria shared between members of the LGBTQ+ community as they navigate their late teens and early twenties at raucous house parties and what Thompson describes as "grimy little pubs where the dancefloor lay next to the bar."

Yet where there is unabashed pleasure and delight to be found in "It's a Sin," there is also grief as the shadow of AIDS that hangs over the first episode gradually envelops the characters.

The series has prompted one positive and perhaps unexpected public health benefit: Activists in the UK have used its success as a launchpad for new campaigns around the importance of HIV testing and the efficacy of treatment. The show's enthusiastic cast of young gay actors have rammed home that message in TV interviews and social media posts.

Still, much like AIDS, Covid-19 has robbed us of collective joy and suddenly forced us to confront trauma and death on a daily basis -- and as the parallels between the two epidemics don't stop there, with some key lessons of the past remaining unlearned, HIV and AIDS activists are experiencing a sense of déjà vu.