How a Democratic Dark-Money Group Flooded the 2018 House Map 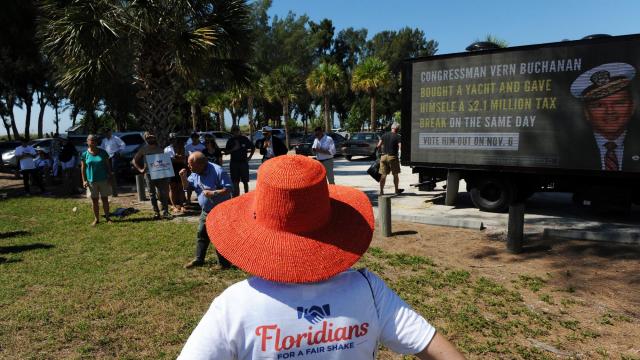 BRADENTON BEACH, Fla. — The billboard flickered from the side of a truck, displaying an image of Rep. Vern Buchanan, R-Fla., wearing a yachtsman’s cap. Keith Fitzgerald, a local dignitary invited by the group Floridians for a Fair Shake, stood before it as he tore into the lawmaker’s record.

The congressman embodied “deep and profound corruption,” Fitzgerald told a thin crowd. The nautical caricature of Buchanan, a wealthy auto dealer, alluded to his purchase of a multimillion-dollar yacht on the same day he voted for a bill cutting upper-income tax rates.

Floridians for a Fair Shake has criticized Buchanan for months, with paid advertising, campaign workers, and events like this, on a recent Sunday in a beachside parking lot. Yet Fitzgerald, a former Democratic state legislator and something of the guest of honor, confessed, “Honestly, I don’t know a whole lot about this group.”

“They told me what they were doing,” he continued. “I’m not sure where the money comes from.”

A structure unknown even to some of those involved, Floridians for a Fair Shake and 13 other groups around the country are funded and coordinated out of a single office in Washington, with the goal of battering Republicans for their health care and economic policies during the midterm elections.

At the center of the effort is an opaquely named Democratic organization, the Hub Project, which is on track to spend nearly $30 million since 2017 pressuring members of Congress in their districts. The great bulk of its funding has come from so-called dark money — funds from donors who are not legally required to reveal their names.

With that money, the Hub Project — in an initiative run by a former Obama administration official and public relations specialist, Leslie Dach, and Arkadi Gerney, a former political strategist for the liberal Center for American Progress — set up an array of affiliate groups around the country, many with vaguely sympathetic names like Keep Iowa Healthy, New Jersey for a Better Future and North Carolinians for a Fair Economy. The Hub Project then used them to mobilize volunteers and run advertising on policy issues against Republican members of Congress many months before the election.

More than a dozen of the targeted lawmakers remain among the most endangered incumbents this year, including Reps. Rod Blum of Iowa, Bruce Poliquin of Maine, Steve Knight of California and George Holding of North Carolina.

The quiet onslaught embodied two of the most important strategic choices by Democrats in the 2018 elections — putting health care and taxes at the core of their message, and using invigorated fundraising on the left to challenge Republicans even in conservative-leaning areas. Several Democratic operatives involved in the group likened its role to that of Americans for Prosperity, the conservative advocacy network funded by the billionaire Koch brothers, during the Obama administration, albeit on a significantly smaller scale.

While some of its visible activities during the midterms have been previously reported, the Hub Project has never before disclosed the scale of its efforts or discussed them extensively on the record.

Gerney, the group’s executive director, said in an interview that the initiative targeting several dozen congressional districts had been designed to keep the focus on the Republicans’ legislative agenda in an election heavily dominated by President Donald Trump’s personality. He described it as a test case for a larger theory of Democratic politics, defined by continuous attacks on Republican policies rather than on Trump.

“It’s a very chaotic media environment and, understandably, lots of people are chasing Trump’s Twitter feed,” Gerney said. “But for most people, their health care, their family finances, their economic future — these things really matter.”

Gerney displayed no ambivalence about using undisclosed contributions — traditionally a source of dismay for Democrats — to punish Republicans for last year’s $1.5 trillion tax law and their attempts to repeal the Affordable Care Act.

Gerney and others involved in the effort described it unfolding in stages, first targeting five congressional districts in the summer of 2017, then expanding to a map of 19 seats over the next 11 months. In some districts, the Hub Project’s state affiliates were running paid advertising months before other outside groups got involved — and before members of Congress mobilized to defend themselves. A former senior official with the Democratic Congressional Campaign Committee, Jessica Floyd, has overseen the advertising.

Polling conducted for the Hub Project, and scrutinized by a pair of Stanford University researchers in an analysis shared with The New York Times, found that voters in districts where its affiliates operated were likelier to remember their representative’s votes on health care and taxes, though in some cases ad campaigns also appeared to generate backlashes among Republicans.

In North Carolina’s 2nd Congressional District, the affiliate group North Carolinians for a Fair Economy spent about $736,000 criticizing Holding, a third-term lawmaker in a conservative-leaning district, and pressuring the Republican in television ads to “stop raising the cost of health care.” Carter Wrenn, a political adviser for Holding, said the attack had come as something of an ambush and forced Holding to scramble to air an ad defending his record.

“They made the first big attack on George,” said Wrenn, adding that he had sought unsuccessfully to discern who was behind the attack: “We tried to figure out who they were, but there’s not much you can tell about who funds them and who they are, exactly.”

Holding is battling for re-election against his Democratic challenger, Linda Coleman.

There are some clues about the campaign’s financing: In July, Politico reported that an “obscure nonprofit” known as the Sixteen Thirty Fund was pouring millions into state-level advocacy groups, including Floridians for a Fair Shake. That same nonprofit funds several other initiatives linked to the Hub Project, including a health care advocacy program called Protect Our Care and a group, Not One Penny, that organizes opposition to Republican tax policies.

Gerney confirmed that the Hub Project controls the money flowing from the Sixteen Thirty Fund into the state-level groups, but the larger nonprofit does not have to disclose its funding sources.

Gerney also confirmed that the Hub Project controls a super PAC of its own, Change Now, which has been funding advertising this fall against a smaller list of Republican-held districts that includes some of the same targets. The group has filed a report with the Federal Election Commission showing it received $1.75 million in funding from the League of Conservation Voters, the influential environmental group, and several people involved with the effort said future reports were expected to show contributions from national labor unions.

Tiffany Muller, president of End Citizens United, a Democratic group that supports stricter campaign finance regulation, said dark money contributions were largely unpopular with voters. But she acknowledged that groups with “really innocuous-sounding names, like Americans for a Better America,” could leave a lasting mark with voters in part because they are perceived as independent from candidates.

“They really dislike dark money and any type of political spending,” Muller said of voters. At the same time, she noted, research suggests “voters trust outside-group ads more than they trust candidate ads.” Dach said that the network of state groups had bolstered the Hub Project’s credibility with voters, connecting it with local activists who in some cases ended up starring in ads. Dach, a former Obama administration health care official, said the 14-month advocacy campaign had helped keep policy at the forefront of the midterm election.

Dach and Gerney both said they decided to go on the record with the details of the campaign because they hoped Democrats would adopt it for future election cycles. In the past, Dach said, Democrats had lacked the funds and focus to sustain an argument on core issues like health care.

“These issues are clear, they’re understandable to people, but I think we neglected and we were financially unable to sustain this kind of work before,” Dach said. “We have been on the same message — pre-existing conditions, age tax, health care costs, sabotage — from day one.”

The event in Bradenton Beach taunting Buchanan was emblematic of the group’s approach — and its limitations. Democrats had been hopeful of flipping the conservative-leaning district, anchored in the comfortable and predominantly white suburbs on the south end of Tampa Bay. A prominent local trial lawyer, David Shapiro, jumped in as the Democratic candidate and the race intensified after a Hub Project researcher discovered Buchanan’s yacht purchase.

Yet as voters on the right have grown more energized about the midterm elections, Buchanan has appeared somewhat more secure in his re-election prospects. As Fitzgerald assailed the Republican’s voting record, flanked by an activist dressed as a yacht captain, Vince Cavell looked on skeptically from a short distance.

Cavell, 66, who retired to the area after a career in the computer business, shrugged at the attacks on Buchanan’s support for the tax law.