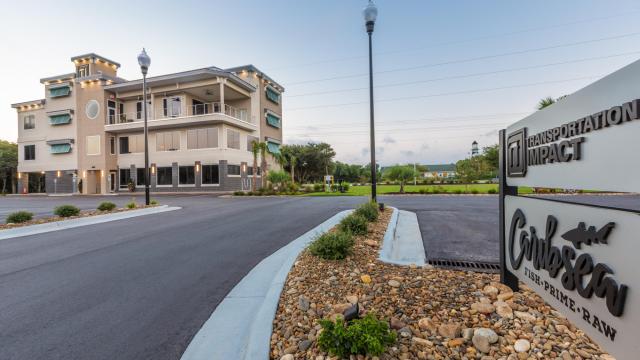 Emerald Isle is known for the glistening hues of its waters, but for business owners Keith Byrd and Travis Burt, it's also a place where they've been able to witness the flow of a different kind of green.

Like many successful business owners, the idea for Byrd's and Burt's company, Transportation Impact (TI), began with a solution to a problem. TI helps large volume shippers across the globe negotiate best-in-class pricing agreements. TI knows most companies are overpaying for shipping and that, on average, it can help businesses save 19.9 percent of their total small parcel spend annually.

"Travis and I worked together [before] — we were good friends and coworkers at UPS," said Byrd, who also serves as chairman of the TI board of directors. "We decided to start our own company. Everybody thought we were crazy to be leaving a good paying job in the downturn of the economy in 2008, but we had a vision."

The vision was simple: use their decades of knowledge about the shipping industry, which they'd gained at UPS, to help shippers save money. What started out as a small parcel logistics company has now morphed into a technology company that gives customers business intelligence to arrange better price agreements for their shipping needs.

With a team of 85 and growing, TI offers three major services: FedEx/UPS negotiation, FedEx/UPS audit and optimization, and freight services to roughly 1,000 customers.

Last year, the company earned an impressive $40 million, but like most entrepreneurs, success did not happen overnight for the co-founders.

TI's humble beginnings started in the broom closet of South Swell Surf Shop, which Byrd co-owned with his partner Doug Starcke in 2008. The first year, TI made nothing. Its second year, it made $17,000. Due to temporary legal restrictions with UPS, Byrd and Burt were forced to conduct business outside of North Carolina and South Carolina, and had to look elsewhere for clients for the first two years, but TI prevailed.

By 2010, TI had moved into a small strip mall of offices before relocating to its current headquarters on Crew Drive. The 13,000-square-foot building includes a waterfall that greets visitors, offices, a large board meeting room, a top floor five-star restaurant — Caribsea — and a rooftop bar.

TI has also broken ground on another 12,000-square-foot building, which will connect to its existing headquarters. Ninety-five percent of the building will be used for more office space, while the remaining 5 percent will be used for additional restaurant business.

"It's a cool evolution of how Transportation Impact has ended up bigger than Travis and I ever thought," Byrd said. "A big part of our success has been surrounding ourselves with really good people. We've recruited a lot of talent right here in Eastern North Carolina."

Jillian Farrington, TI's marketing coordinator, is one of these Eastern North Carolina, born-and-bred employees. Raised in Emerald Isle, Farrington told herself she'd never come back to Carteret County after college at North Carolina State University, but TI changed her mind.

"I was going to be a city girl — my dream was to one day live in New York City. However, after I graduated college and had been working for two years, I'd heard the buzz around town. I made my way back from Raleigh and have no regrets — it's been the best opportunity," she said. "I get to be in this community, work at this amazing company, and be next to my family."

Additionally, TI annually donates 1 percent of its profits to charity and, as an act of goodwill, 1 percent of the value of its services to organizations who could benefit but may not have the funding. It's reflective of TI's dedication to its community, as well as the altruistic nature of the Carteret County community at large.

When it comes to the location of this top Inc. 5000 business, which was also voted a 2019 Best Employer in North Carolina by Business North Carolina, some may ask, why the Crystal Coast?

Simply put, because Byrd and Burt love it.

Both men quickly realized that for TI to be successful, they would have to travel and "be on a plane" frequently for their business model to work. There are, after all, only so many high-volume shippers in Eastern North Carolina. However, the home base for TI was to be Emerald Isle.

The landscape, community and ability to live at the beach made the decision easy. A resident of Carteret County since 1986, Byrd convinced Burt to move permanently to Emerald Isle in 2011 to continue the successful operation of TI.

"My first job after high school, I was living in D.C. and I had a two-hour commute to work every day — one way. It was an 18-mile trip. I moved here on purpose — now I have a two-minute golf cart commute to work," said Burt, who vacationed in Emerald Isle for years before moving to the area. Burt serves as vice chairman of the board of directors.

"I knew that if I was going to be working 60 to 90 hours a week, that I wanted to live in paradise. I don't mind driving to nearby cities for clients or getting on a plane," Byrd added, emphasizing that the global nature of TI allowed them to set up their headquarters wherever they wanted. "The location, the beach and the people in this community are amazing."

Added Burt, "We're incredibly fortunate to be able to have started and grown our company in Emerald Isle. Being located in a beautiful vacation destination has allowed us to recruit employees from all over the country. Our employees love living on the North Carolina coast, and I see their affection for the area, as well as for Transportation Impact, on their faces every day."