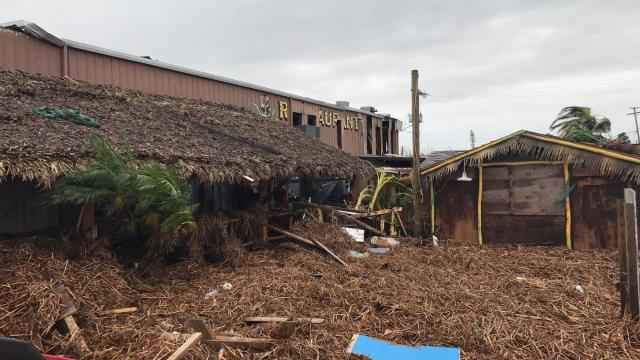 The sprawling and soaked Houston metro area and other deluged towns in southeast Texas braced for devastating floods and pummeling rainfall on Sunday as Tropical Storm Harvey stalled over land and drenched dogged searchers and anxious residents.

A flash flood emergency was in effect for parts of the Houston area. National Weather Service and local officials are advising Houston-area residents to avoid traveling.

Three to 4 inches of rainfall were reported in the region in one hour's time. First responders investigated the report of a woman swept away in her vehicle by floodwaters.

"It's going to last four to five days," said Houston Mayor Sylvester Turner, who urged drivers to stay off the road. "This is Day One."

Texans who rode out the most powerful hurricane to hit the United States in a decade ventured out on Saturday to see what was left of their neighborhoods in what was "now turning into a deadly inland event."

The first fatality was reported in the hard-hit coastal city of Rockport, where the person died in a house fire during the storm, Aransas County Judge Burt Mills said Saturday afternoon. "We didn't know about it until today," he said.

At least a dozen people were injured, Mills said.

With dire warnings of tornadoes, torrential downpours and days of flooding to come, broad swaths of southeast Texas were littered with uprooted trees, toppled signs, flagpoles that snapped like toothpicks and clusters of bricks peeled like scabs from walls and rooftops.

Additional fatalities were feared in Rockport, where an estimated 5,000 residents had stayed put for the storm that blasted ashore as a Category 4 around 11 p.m. ET Friday between Port Aransas and Port O'Connor, Aransas County Sheriff Bill Mills said.

Callers to the local emergency dispatch line told of walls and roofs collapsing on people across the city, where an official had warned those who opted to stick out the storm to write their Social Security numbers on their arms for body identification.

"The storm isn't moving, but the rain bands are moving like a pinwheel," he said. "You are going to get a pinwheel (Saturday night) that will wake up -- or you'll wake up with 12-18 inches of new rainfall on the ground."

Shortly after Harvey became a tropical storm, with sustained winds of 70 mph, Saturday afternoon, Gov. Greg Abbott told reporters that the state had more than 1,000 workers involved in search and rescue operations.

"We've already taken a severe blow from the storm, but we're anticipating another one when the flooding comes," he said.

The storm was a Category 1 by late Saturday morning, packing winds of 75 mph before Harvey stalled during the afternoon. Some places even far inland were predicted to get as much as 40 inches of rain through Wednesday.

While the worst of the storm surge had ended by midday Saturday, the coastal flooding threat was due to increase as already-swollen rivers and bayous get pounded with heavy rain, CNN meteorologist Michael Guy said. Sea water pushed onto the shore also won't recede quickly, he said, meaning "this is going to be a long, ongoing flood event."

Abbott said the 210-mile-long corridor between Corpus Christi and Houston was expected to receive as much as 30 more inches of rain on top of the double-digit rainfall figures that had already fallen.

Harvey wielded the "highest potential to kill the most amount of people and cause the most amount of damage," Brock Long, director of the Federal Emergency Management Agency, had warned. He echoed forecasters who predicted Harvey would be leave areas "uninhabitable for weeks or months," echoing language last seen ahead of Hurricane Katrina in 2005.

Here's where we stand:

-- Even after weakening upon landfall, Harvey was still a dangerous storm and "turning into a deadly inland event," the FEMA chief tweeted.

-- Harvey could maintain tropical storm strength through late Sunday, then weaken into a tropical depression that hangs in the region through Thursday, the National Hurricane Center predicted.

-- More than 300,000 customers on the Texas Gulf Coast had no power around 2 p.m. ET Saturday, the Electric Reliability Council of Texas said, amid reports of downed power lines and trees.

-- There were more than a dozen tornadoes spawned by the storm hit Texas on Saturday. The Houston office of the National Weather Service reported 12 twisters in its area. Harris County Sheriff Ed Gonzalez said deputies saw a possible tornado near Cypress Fairbanks, just outside Houston. There were no immediate reports of injuries. "We're seeing extensive damage to properties," he said.

-- Corpus Christi officials tweeted Saturday afternoon that evacuees could return "but be advised we are under a water boil advisory & limited wastewater usage due to outages at treatment plants."

-- About 25% of oil and gas production in the Gulf of Mexico has been halted because of Hurricane Harvey, the Bureau of Safety and Environmental Enforcement announced Saturday evening.

Firefighters who hunkered down in their station in Rockport as Harvey passed over the city of about 10,000 residents recounted a harrowing night.

For hours, Karl Hattman and his family listened to "what sounded like a freight train" roar outside their Rockport home. When the fury calmed, they headed out into the darkness to find many trees down, debris blocking their driveway and Hattman's vehicle damaged by flying roof tiles.

James Salazar is the captain of the volunteer fire department in Seadrift, Texas.

He rode out the storm and drove around Saturday to check on other residents. Salazar said he had some roof damage at his house, but it was not too bad. He said damage to the town could have been worse.

"As far as homes go, there are some with damage and some that are flooded. It could have been much worse," he said.

Taking shelter and bracing for rain

"This thing is turning into quite the marathon," Nick Gignac, of Corpus Christi, told CNN around 2 a.m. ET. "You expect these things to be a quicker flash-and-bang than they are. To be honest, the intensity still hasn't let up as the storm came in. Things were a little lighter than they are right now, and you expect it to get intense and let up. And things have not let up at all."

In San Antonio, about 950 people took refuge in shelters, Woody Woodward, a spokesman for the city fire department, told CNN, adding that there was still plenty of space for more people.

Ten critically ill babies in Corpus Christi were taken to a hospital in North Texas ahead of the storm, the Cook Children's Hospital in Fort Worth said in a statement.

"All our babies made it here safely," Dawn Lindley, a registered nurse with Children's Health Transport Team, told CNN. "The majority ... were premature and had ongoing issues. They were easily accommodated to the hospitals here to make sure they had continued care and the storm wasn't going to be a factor in how they recovered from their illnesses."