Housekeeper Spoke Out Against President Trump. What Price Will She Pay? 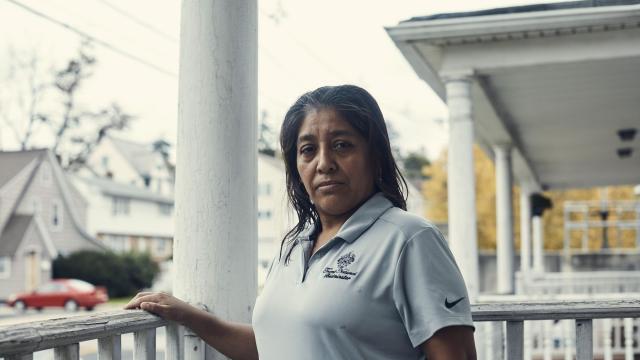 Victorina Morales, a housekeeper at the Trump National Golf Club in Bedminster, New Jersey, disclosed in an interview with The New York Times this week that she had been working illegally at the facility for more than five years.

Morales, 45, a Guatemalan immigrant, entered the United States at the California border without inspection in 1999 and settled in Bound Brook, New Jersey, a community that is about a 20-minute drive from Trump’s flagship golf club.

Before working there, she packed Huggies disposable diapers, Dove soap and Neutrogena products at a warehouse and cleaned bathrooms at a hotel.

At the Trump golf course, Morales was often called on to clean Trump’s private residence. She said he was demanding in terms of cleanliness, but also friendly, sometimes handing out tips of $50 or $100. But she said a supervisor often taunted her about her undocumented status, and she was deeply disturbed when Trump began publicly railing against immigrants from Latin America in the country illegally, often characterizing them as criminals.

She described how supervisors at the golf club were not only aware of her undocumented status, but took steps to help keep her and others at work. A manager, she said, helped her procure a phony green card and Social Security card.

On Friday, Morales, who has now appeared on nearly every major television network, said she was uncertain what the future would bring.

“The truth is I’m sad, I feel bad,” she said. “Many people are pointing their finger at me. But I don’t regret what I did.”

— Will Morales be able to keep her job?

Morales has said she thinks it best that she not return to the club, where she would most likely be immediately fired. The Trump Organization, which owns the golf club, said in a statement Thursday that any employee found to be working without legal authorization would be “immediately terminated.”

She and a second woman who came forward, Sandra Diaz, who was in the country illegally at the time she worked at the golf club between 2010 and 2013, have been in New York with their lawyer, Anibal Romero, who is trying to make sure they suffer no reprisals. Diaz is now a legal resident of the United States, but Morales is more vulnerable.

— Could Morales be deported?

Any person in the country illegally can be deported if they are encountered by federal immigration authorities. If a full state and federal investigation is conducted, there are protections that should kick in for Morales because she came forward with information that raises credible questions of civil and criminal violations by the Trump Organization, according to lawyers.

She and other workers at Bedminster who are in the country illegally could be granted visas that protect victims of crime and trafficking as well as witnesses. This means they would not be viewed as perpetrators of illegal activity at the club; their employer would be.

“There are serious questions that need to be fully investigated by federal and state authorities,” said David Leopold, a former president of the American Immigration Lawyers Association, who practices in Cleveland.

“The allegations that someone inside the organization procured false documents for its workers suggest a level of coercion over these workers, which is precisely what federal law protects them from,” Leopold said. “You can’t hire someone and coerce them to continue working for you.”

— Are there any other remedies?

Romero has filed a petition seeking asylum for Morales and her family. About five years ago, she said, her father-in-law was hacked with a machete by a group of men who invaded his home in Guatemala to extort money they assumed he possessed because he had family members in the United States. They then dragged him to a field and fatally shot him. The assault happened in front of her son, Marvin Gonzalez, when he was a child.

That could give her family some basis for protection under asylum laws, though it is by no means guaranteed.

Morales has an interview on her asylum petition scheduled for Dec. 17 with U.S. Citizenship and Immigration Services. But Romero said that he plans to request a postponement because the attention generated by her revelations has changed her profile and hampered their ability to prepare appropriately.

“We need more time,” Romero said. “Experts, psychologists will be required for the case. She is now a public figure in the United States. That puts her more at risk of returning to Guatemala than before.”

Even if Morales is placed in removal proceedings, the asylum application buys her time. If asylum is denied, Romero said that he would appeal to an immigration judge.

“I can go all the way to the Supreme Court,” he said.

— What has happened since the story was published?

Morales and Diaz insist they were not the only employees of the golf club in the country illegally, but the women said Friday that three co-workers have told them that work there had been continuing as usual.

Morales received a call from the housekeeping supervisor but did not take the call.

She said she was not certain what she would do next. She has a second job cleaning offices at night and hopes to continue working there.

A large number of people have spoken out on her behalf on social media; one started a GoFundMe campaign.

“This is a 5-foot Guatemalan woman who stood up to the most powerful man in the world,” said Frank Sharry, executive director of America’s Voice, a national immigration advocacy group. “She exposed the hypocrisy of a president who rails against undocumented workers and then has what appears to be a criminal operation to do that at Bedminster.”

— The issue of workers in the country illegally goes well beyond the Trump golf club. What is the solution?

There are nearly 11 million immigrants living illegally in the United States. About 8 million of them, the overwhelming majority, have jobs. They are vital to industries such as agriculture, hospitality and construction.

Companies in several sectors have been calling for years for Congress to pass immigration reform legislation that would offer some form of legalization to longtime residents.