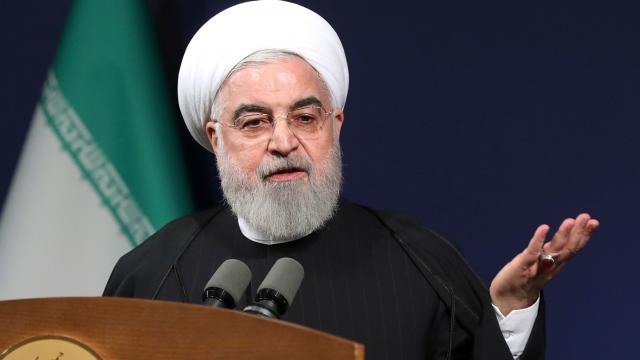 CNN — The House voted on Thursday to approve a pair of measures intended to rein in President Donald Trump's ability to take military action against Iran, the latest effort by Democrats to reassert congressional authority amid simmering tensions with the country in the wake of a US strike that killed a top Iranian general.

The White House has threatened to veto both measures, and the fate of both in the Republican-controlled Senate is unclear.

One of the measures, sponsored by Democratic Rep. Ro Khanna of California, would prohibit funds for military offensive attacks against or in Iran without congressional authorization.

"The last thing we can do is give the Pentagon another blank check," Khanna told reporters Wednesday. "The only time the Pentagon listens is where we exercise our power of the purse."

The other measure up for a vote, sponsored by Democratic Rep. Barbara Lee of California, would repeal the 2002 authorization for the use of military force in Iraq, which Democrats have argued the Trump administration has used without justification as cover to escalate hostilities with Iran.

Some administration officials have cited the 2002 authorization for the use of military force as the legal authority used in the strike against Iranian Gen. Qasem Soleimani, including White House national security adviser Robert O'Brien, who said the attack was "fully authorized under the 2002 AUMF." Defense Secretary Mark Esper has instead cited Article II of the Constitution as the authority underpinning the strike.

Votes on the two measures to rein in the President come after the House voted earlier this month to approve a war powers resolution aimed at restraining Trump's ability to take military action against Iran without congressional approval. The Senate is expected to take up an Iran war powers resolution sponsored by Democratic Sen. Tim Kaine of Virginia, but action on that front appears to be on ice while the impeachment trial is underway in that chamber.

In an apparent reference to the measure on the 2002 authorization for the use of military force, however, Trump tweeted on Wednesday that he wants "everyone, Republican and Democrat, to vote their HEART!"

Later in the day on Wednesday, however, the President tweeted, "Nancy Pelosi wants Congress to take away authority Presidents use to stand up to other countries and defend AMERICANS. Stand with your Commander in Chiefs!"

Instead of bringing Khanna's and Lee's legislation forward as standalone bills, House Democratic leaders opted to set up the two measures as amendments to an uncontroversial commemorative coins bill that has already passed the Senate. The procedural maneuvering was meant to block House Republicans' ability to make a motion to recommit -- the last opportunity to amend legislation in the House.

While some Republicans have ridiculed this strategy by Democrats, Khanna told CNN he is "happy with the way leadership structured this," because it would allow a clean vote on his legislation.