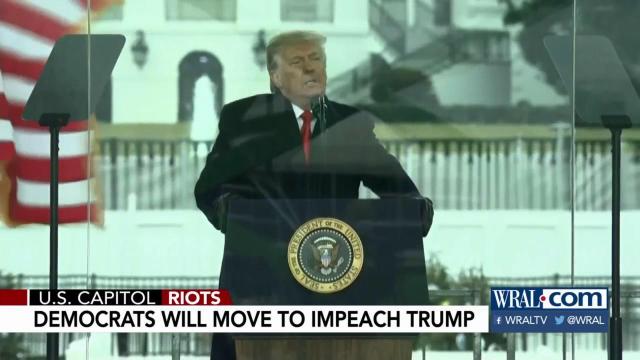 House Speaker Nancy Pelosi said Sunday the House will attempt to pass a resolution by unanimous consent Monday morning calling for Vice President Mike Pence and President Donald Trump's Cabinet to invoke the 25th Amendment and remove Trump from office -- her first time definitively saying the House will move to impeach him.

If the resolution doesn't pass by unanimous consent, and it most assuredly won't given likely Republican resistance, then the measure will be brought to the floor for a full vote on Tuesday.

The resolution will call on Pence to respond within 24 hours.

"Next," Pelosi said in a letter to Democratic colleagues, "we will proceed with bringing impeachment legislation to the Floor."

"In protecting our Constitution and our Democracy, we will act with urgency, because this President represents an imminent threat to both. As the days go by, the horror of the ongoing assault on our democracy perpetrated by this President is intensified and so is the immediate need for action," Pelosi said.

House Majority Whip James Clyburn said earlier Sunday House Democrats might wait until after President-elect Joe Biden's first 100 days in office to send any articles of impeachment against President Donald Trump to the Senate, a move that would give the incoming President time to tackle his agenda in Congress before the start of a time-consuming trial.

"We'll take the vote that we should take in the House, and (House Speaker Nancy Pelosi) will make the determination as to when is the best time to get that vote and get the managers appointed and move that legislation over to the Senate," Clyburn told CNN's Jake Tapper on "State of the Union."

"It just so happens that if it didn't go over there for 100 days, it could -- let's give President-elect Biden the 100 days he needs to get his agenda off and running, and maybe we'll send the articles sometime after that," the South Carolina Democrat added.

Pelosi said Friday that Democrats are prepared to move forward this week with impeaching Trump over his role in last week's deadly attack on the US Capitol if he doesn't resign. Democrats plan to introduce their impeachment resolution, which already has more than 190 co-sponsors, on Monday and sources tell CNN that the party is looking at having votes no sooner than Wednesday but they are still sorting out their plans.

The comments from Clyburn come as Democrats grapple with how impeaching Trump for a second time could impact Biden's early days in office, when he is working to get administration appointments approved in the Senate and tackling legislative priorities, like another coronavirus relief package. The incoming President's aides, meanwhile, are working behind the scenes with Pelosi and others to prevent Congress from becoming bogged down with impeachment during his early days in office.

House Democrats, on a call Pelosi held Saturday night with her leadership team, discussed the option of impeaching Trump this week and waiting until later to send the article of impeachment over to the Senate to delay the trial until after the early days Biden's presidency, according to Democrats in the party's leadership.

Pelosi said in a interview on CBS' "60 Minutes" set to air Sunday evening that she liked the idea of invoking the 25th Amendment "because it gets rid of him," but explained, "one of the motivations people have for advocating for impeachment" is to prevent Trump from holding office again.

"There's strong support in the Congress for impeaching the President a second time," she said.

Senate Majority Leader Mitch McConnell previously made clear in a memo that even if the House moved in the coming days to impeach Trump, the Senate would not return to session before January 19. That would place the start of the trial on January 20 -- the date of Biden's inauguration.

From there on out, the Senate is rendered mostly incapable of any action other than the trial until its completion, as was apparent during the first Trump impeachment trial.

By impeaching and removing Trump, even at this late stage of his term, the Senate could subsequently vote to disqualify him from ever holding federal office again, taking an extraordinary action against a former president.