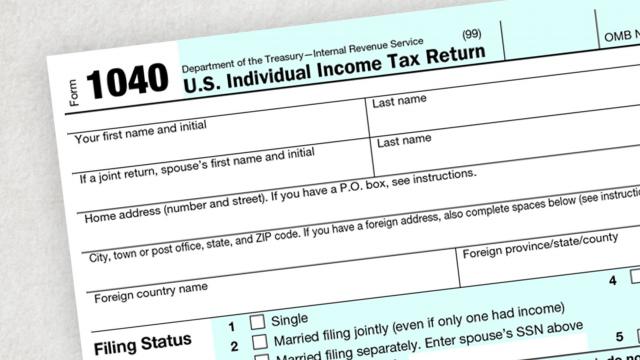 NEW YORK (CNNMoney) — The tax bill unveiled by Republicans in the House on Thursday would not, as had been rumored, eliminate the tax penalty for failure to have health insurance. But it would eliminate a decades-old deduction for people with very high medical costs.

The controversial bill is an effort by Republicans to revamp the nation's tax code and provide dramatic tax cuts for business and individuals. However, its future is not yet clear because Republicans, who control both the House and Senate, appear divided on key measures.

The medical deduction, originally created in World War II, is available only to taxpayers whose expenses are above 10% of their adjusted gross income.

Because of that threshold, and because it is available only to people who itemize their deductions, the medical expense deduction is not used by many people - an estimated 8.8 million claimed it on their 2015 taxes, according to the IRS.

But those 8.8 million tax filers claimed an estimated $87 billion in deductions; meaning that those who do qualify for the deduction have very high out-of-pocket health costs.

"For many people, this is a big deduction," said David Certner, legislative counsel for AARP, which opposes the change.

AARP has calculated that about three-quarters of those who claim the medical expense deduction are 50 or older, and more than 70% have annual incomes of $75,000 or below.

Many of those expenses are for long-term care, which is typically not covered by health insurance. Long-term care can cost thousands or tens of thousands of dollars a year.

Sen. Ron Wyden, a Democrat from Oregon who is a ranking member of the Senate Finance Committee, called the bill's elimination of the medical expense deduction "anti-senior."

But defenders of the bill say the elimination of the deduction should not be seen in isolation.

The House tax bill also proposes eliminating billions of dollars in corporate tax credits that have played a key role in the booming "orphan drug" industry.

In an FAQ posted on the House Ways and Means Committee website, the bill's sponsors denied that the change would "be a financial burden."

"Our bill lowers the tax rates and increases the standard deduction so people can immediately keep more of their paychecks -- instead of having to rely on a myriad of provisions that many will never use and others may use only once in their lifetime," the sponsors said.

Getting rid of many current deductions "is being done to finance rate cuts and increase the standard deduction and child tax credit," said Nicole Kaeding, an economist with the business-backed Tax Foundation. So, for many tax filers, she said, "there will likely be offsetting tax cuts."

On the other hand, those offsetting cuts almost by definition will not make up the difference for people with very large medical expenses, who are the only ones who qualify for the medical deduction.

Strikingly absent from the bill -- for now -- is any reference to the elimination of the tax penalty for failure to have health insurance. The so-called individual mandate is one of the most unpopular provisions of the Affordable Care Act, which Republicans failed to change or repeal earlier this year.

Sen. Tom Cotton, a Republican from Arkansas, is continuing to push language to add to the bill that would eliminate the penalty. President Donald Trump has added his endorsement via Twitter: "Wouldn't it be great to Repeal the very unfair and unpopular Individual Mandate in ObamaCare and use those savings for further Tax Cuts," he wrote Wednesday.

But while the president is correct that there would be savings from eliminating the mandate, the Congressional Budget Office has also estimated that millions more Americans would become uninsured as a result.