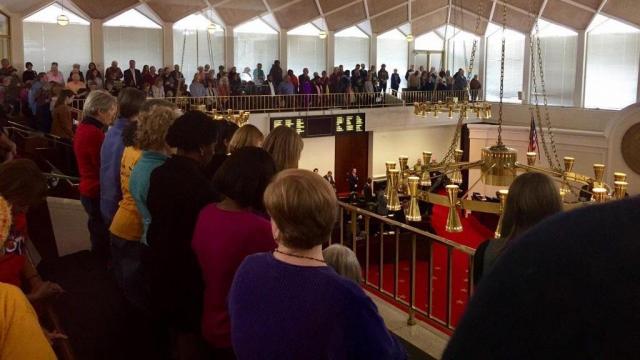 ​The House voted unanimously Wednesday to add $2.3 million to ​the state's response on GenX and other water quality concerns, but the measure was quickly blasted by Senate leadership, which dubbed the bill a do-nothing effort.

"What the House passed today unfortunately does nothing to prevent GenX from going into the water supply," Senate President Pro Tem Phil Berger said in a statement, which came after reporters pushed Berger and other Senate Republicans to stake out clear positions on a bill backed by GOP leadership in the House.

"It leaves North Carolina taxpayers holding the bag for expenditures that should be paid for by the company responsible for the pollution, fails to give [the Department of Environmental Quality] authority to do anything they can’t already do and authorizes the purchase of expensive equipment that the state can already access for free," Berger, R-Rockingham, said in his statement.

House Republicans had praised the measure as a solid step toward what may eventually be a raft of state policy changes in response to last summer's revelations that chemicals used to make Teflon, produced at the Chemours plant in Bladen County, are in Wilmington's drinking water. Rep. Ted Davis, R-New Hanover, had been incensed by the Senate's unwillingness to take up his bill, saying shortly before the House voted that "all I know is that we're doing something."

"We realize what an important issue this is," Davis said.

Berger's statement was emailed to reporters after the House voted and adjourned, and an effort to reach Davis to respond was not successful.

The measure becomes one of several major issues dividing the legislature, not across party lines but between Republican majorities in the two chambers. Between that lack of consensus and a bombshell federal court decision throwing out North Carolina's congressional maps on the eve of this legislative re-gathering, the special session has become, for now, an exercise in limbo.

The House and the Senate remain in session, but there are no scheduled floor votes, no set end date and there's little in the way of a definite agenda.The only things finalized Wednesday were a handful of routine appointments, including a pair of appointments to the North Carolina Utilities Commission that Gov. Roy Cooper has sought confirmation on for months.

The House's GenX proposal includes new funding to buy a high-resolution mass spectrometer in an effort to identify chemicals in state rivers and drinking supplies. It was unclear late Wednesday why the two chambers were so at odds over whether this new equipment is needed. State officials did not immediately respond to WRAL News efforts to confirm what equipment state scientists can already access, as Berger put it, for free.

The House measure, inserted into House Bill 189 on Wednesday, also provides marching orders for various entities to study water chemistry in state rivers. Berger's criticism of the bill tracks with some of the complaints offered Wednesday by House Democrats who, though they voted for the bill, argued that it doesn't go far enough, does't include near enough funding and simply told scientists to do what they're already doing.

House Republicans shot down a number of amendments from Democrats seeking to toughen state environmental policies or add additional funding. Even so, DEQ Secretary Michael Regan called the bill "a much needed first step," and the House vote was 116-0.

In the Senate, GOP members initially pleaded ignorance on the details of the bill, which was crafted for months but emerged in near-final form only Tuesday evening and had another $1 million added to it Wednesday. Sen. Michael Lee, R-New Hanover, whose district draws drinking water affected by the plant, pointed to previous legislative efforts that included $435,000 for the University of North Carolina at Wilmington and the local water authority to study GenX and ways to remove the chemical from drinking water.

"I think a lot of folks are thinking nothing has occurred," Lee said. "We actually started this months ago."

Berger said in his statement that the Senate would wait on data requested back then to move forward, taking "meaningful action to address this problem in the short session," which is scheduled for May.

State officials have said repeatedly the water in and around Wilmington – and in Cary and other places where trace amounts of GenX or other chemicals have been found – is safe to drink. There are exceptions for homes on wells near the Chemours facility in Bladen County, where the company has been required to buy residents bottled water, but municipal supplies have been declared safe.

But because a GenX precursor has been shown to cause cancer, and given the limited study on GenX and related chemicals, fears remain.

Wednesday was the first day of a special legislative session full of question marks, particularly after a panel of three federal judges declared the state's congressional map unconstitutional on Tuesday and forbade North Carolina from holding planned U.S. House elections this year until a partisan gerrymander in the maps is addressed.

Republican leaders said they were huddling with their attorneys and promised to appeal the decision quickly to the U.S. Supreme Court, seeking a stay that would allow elections to go forward. Filing in these races is slated to run Feb. 12-28. Whether the legislature will also redraw the map, as the court gave it two weeks to do, remains to be seen.

"That decisions's 200-something pages long," Berger said. "I'm getting a briefing this afternoon from our lawyers ... so it's really hard for me to say anything specific about what we're going to do, when we're going to do it."

Protesters were at the General Assembly by the hundreds Wednesday, filling visitors galleries above both the House and the Senate and shouting "shame, shame" as the chambers adjourned throughout the day without major action. A number of issues have drawn protest recently, but the GOP proposal to redraw election districts for trial court judges around the state seems to have drawn the most people.

That issue will be in committee Thursday at 1 p.m. Legislators not only have new map proposals before them but the possibility of moving to an appointments system where legislators would forward a handful of potential judicial candidates to the governor for consideration. The latter seems to have more support in the Senate than the House, but a full debate has not yet been had.

Democrats are dead-set against these changes, despite backing similar appointment proposals in the past. The well of trust between the majority and minority parties is simply too poisoned for compromise, Democratic House leaders said Wednesday. Cooper has staked out much the same position after a number of successful GOP efforts in recent years to rework the judiciary, including a measure last year to return to partisan judicial elections and, later, to cancel this year's judicial primaries.

Berger said Wednesday that "there are some issues that need to be dealt with" when it comes to class size, but he didn't tip his hand on details or timing, and he said repeatedly that the General Assembly has put the money it should have into public schools.

Correction: This story initially mis-stated how much funding the House included in its GenX bill.