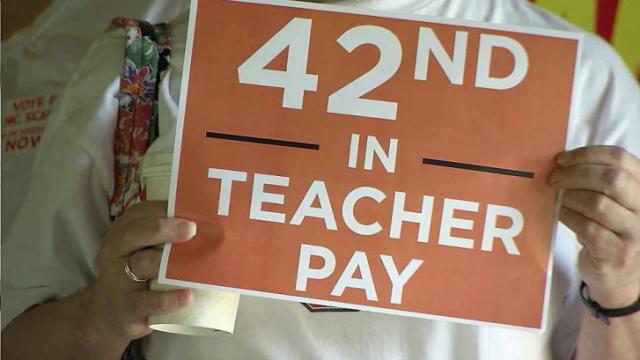 Teacher pay is one of the biggest political items in the state's spending plan North Carolina lawmakers are currently debating.

House and Senate Republicans have different ideas over raising teacher salaries, though both want to give an average 4 percent boost.

However, House lawmakers want to distribute the raises more evenly across experience levels. Republican leaders want to raise each pay band by 2 percent. This would lift the current $50,000 cap for experienced teachers to $51,000.

The two proposals would also move every teacher a step up in the pay plan.

Under both proposals, teachers going into their fifth year of teaching would receive the biggest boost. With the Senate plan, they’d go from $35,000 to $38,250; under the House, they’d receive $37,230.

Before last year, teacher salaries had been essentially frozen since 2008. With North Carolina ranking among the worst in the nation in teacher pay, lawmakers vowed to raise the starting salary to $35,000. The governor, as well as both chambers, included that promise in their budget plans for 2015-17.

Last year, they gave an average 7 percent increase to teachers that resulted in bigger pay bumps for teachers early in their careers. They also boosted the starting salary from $30,800 to $33,000.

The Senate is expected to vote on its proposal this week; the House approved its plan last month. Leaders from both chambers will have to strike a deal as they craft a state budget this summer.

This report first appeared on WUNC/North Carolina Public Radio as part of their education coverage. Reema Khrais is the 2014 Fletcher Fellow focused on Education Policy Reporting. The Fletcher Fellowship is a partnership between WUNC and UNC’s School of Journalism and Mass Communication funded in part by the Fletcher Foundation.