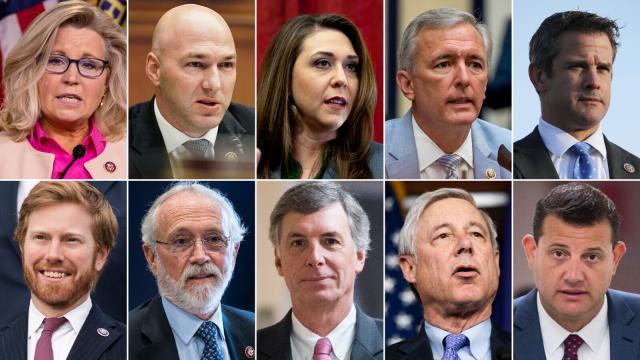 CNN — The 10 House Republicans who voted to impeach former President Donald Trump are facing a wave of anger at home, with Republican officials, donors and voters condemning their votes and primary challengers launching their campaigns early.

The backlash has turned their 2022 primaries into tests of how long Trump can hold the stage in Republican politics and whether GOP voters are willing to turn the midterms into tests of loyalty to him.

The group of 10 Republicans includes moderates in swing districts, as well as some reliable conservatives, including the No. 3-ranking House Republican, Wyoming Rep. Liz Cheney, and South Carolina Rep. Tom Rice.

"It started out big and it's still growing. People are angry," said Bryan Miller, the Republican chairman in Wyoming's Sheridan County who said he plans to run against Cheney in the party's 2022 primary. "She's not living up to what we in Wyoming wanted, across the board. And it's a huge betrayal."

Anthony Bouchard, a Wyoming state senator who is also running against Cheney, said he's been "flooded" with messages encouraging a primary run.

"I believe that her impeachment vote revealed who she has allegiance to, and I don't think the voters will forget it any time soon," Bouchard said.

The early seeds of primary trouble for House Republicans who voted to impeach Trump is an illustration of how much loyalty the former President retains within his party, weeks after he departed office and was removed from his favorite social media platforms.

Whether the anger against those 10 lawmakers will survive the next year is far from clear, with congressional districts' makeup certain to shift as states complete the once-a-decade process of redrawing district lines and more than a year for the anger to dissipate and the GOP's focus to move past Trump.

"Each and every one of those 10, when they made that vote, they knew in their heads and in their hearts it was probably a political death sentence. They knew that," said former Rep. Joe Walsh, the conservative Illinois Republican whose 2020 primary against Trump did not gain traction.

He said any establishment donor money that goes to support those 10 GOP lawmakers will be "dwarfed" by money aimed at ousting them.

"I wouldn't be surprised to see a number of them not even run again, depending on how their districts shake out" after redistricting, Walsh said.

It's also too early to tell how willing Trump and his family members will be to insert themselves in intra-party battles -- especially after social media bans limited Trump's ability to reach wide audiences easily -- and whether Trump's ire will be focused narrowly on Republicans he believes wronged him, such as Georgia Gov. Brian Kemp and Secretary of State Brad Raffensperger, who rebuffed Trump's efforts to overturn the state's election result, or if he will cast a wider net. The New York Times reported that Trump is most focused on ousting Kemp, potentially through a primary challenge by former Rep. Doug Collins, and that Cheney is the former President's next focus.

Trump has been showing allies a poll of Wyoming voters commissioned by his super PAC and conducted by Trump's longtime pollster John McLaughlin to make the case that Cheney's vote on impeachment is not popular among Republicans there, a source told CNN. His super PAC also issued a news release highlighting the poll.

Donald Trump Jr. called into Gaetz's event and said Cheney should be ousted in next year's primary.

The Republicans who voted to impeach Trump have all defended their votes by saying they were a matter of principle after Trump encouraged attendees at a January 6 rally to march on the US Capitol -- which led to the deadly riot that afternoon.

Amid the complications of primary challenges against House Republicans who voted to impeach Trump is the potential that -- like in Wyoming -- multiple candidates could enter primaries, fracturing the opposition to vulnerable Republican incumbents.

Still, the impeachment vote has led some state and local parties, as well as major donors, to say that they are dropping their support for those Republicans -- for good.

In Washington, the state's Republican Central Committee passed a resolution condemning Trump's impeachment "without question or exception" and expressing disappointment at Reps. Dan Newhouse and Jaime Herrera Beutler, two of the 10 Republicans who voted in favor of impeachment.

The Clark County Republican Women's Group sent a letter to Herrera Beutler explicitly saying it would recruit and back a primary challenger.

"We will do everything in our power as the largest Republican Women's organization in Washington state to recruit and elect a conservative candidate who will represent our values," the group said in the January 13 letter.

The letter said that "this vote will never be forgotten, as your action is a personal affront to the 70 million plus Americans who voted for our President."

In Michigan, the Allegan County Republican Party censured Rep. Fred Upton for his vote, saying that he "betrayed oath of office and core values" of the county party.

Tom Norton, the third-place finisher in a 2020 primary won by Rep. Peter Meijer in western Michigan, said he is running again and appeared on former Trump adviser Steve Bannon's podcast two weeks ago.

Gene Koprowski -- who launched a primary bid against Illinois Rep. Adam Kinzinger, one of the GOP's most outspoken Trump critics -- named the campaign committee he created on January 14 "Impeach Adam Kinzinger 2022."

The "issues" page on the website launched by former Fresno city councilman Chris Mathys, who says he'll take on Rep. David Valadao in California, contains just three sentences, all targeting Valadao's impeachment vote: "President Trump has fought in our behalf to protect our conservative republican values. It is unbelievable that congressman David Valadao would for the impeachment of President Donald Trump. I will do everything to restore our conservative values as a conservative republican."

Ken Richardson, the chairman of the school board in South Carolina's Horry County, said he'd long thought he might run for the congressional seat of Rice -- a conservative House member who was among the most surprising votes to impeach Trump -- years down the road.

"I didn't know that Tom was going to shoot himself in the foot. But he's done that," Richardson said. "To say I'm getting calls would be an understatement."

He called Rice "a nice guy" and noted that Rice had been to barbecues at his house.

"But the county that we live in right now -- 71% of the people voted for Donald Trump. And if you're the congressman for this area, you've got to understand, that's not Tom Rice's seat and it's not Ken Richardson's seat. That seat belongs to the people," Richardson said.

Those considering primary runs said they have already heard from major Republican donors -- and are convinced that GOP primary voters' anger toward those who voted to impeach Trump will ease before the 2022 primaries.

"I do not think this is going to dissipate," Miller said.

Richardson said: "There's no doubt in my mind it's going to last way past the election."