House Republicans Pick Kevin McCarthy as Their Next Leader 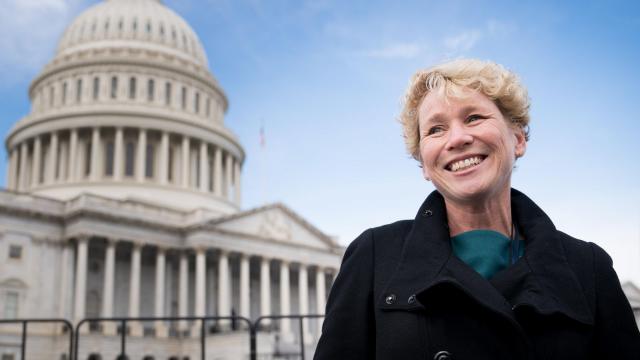 WASHINGTON — House Republicans elected Rep. Kevin McCarthy of California to be their leader on Wednesday, embracing continuity of leadership despite steep losses in last week’s midterm elections that cost the party a majority for the first time in eight years.

McCarthy, the current majority leader and No. 2 Republican in the chamber, will replace Speaker Paul Ryan of Wisconsin, who is retiring at the end of the year. He is tasked in the months ahead with charting the party’s path back to the majority in 2020. And more immediately, he will oversee Republicans’ efforts to protect President Donald Trump from the expected onslaught of oversight, investigations and even a potential impeachment by newly empowered House Democrats.

In remarks after the secret-ballot vote, McCarthy, 53, sought to project Republican unity, pledged to “win back the suburban areas” that helped cost the party the majority, and said he would be willing to work with Democrats — up to a point.

“We will work with anybody across that aisle if they work to move America forward,” he said. “But let me be very clear: If their agenda is simply investigations, impeachment and not focused on the hardworking American public, we will be there to defend the American public.”

McCarthy, whose fundraising prowess and encyclopedic political knowledge have won him deep relationships within the conference, easily beat back a challenge from Rep. Jim Jordan of Ohio, 159-43. Jordan, one of the founders of the conservative House Freedom Caucus, argued that Republicans lost control of the House because they were insufficiently conservative. He advocated an abrupt break from past leaders.

But at a time when Republicans find themselves divided over how to protect their legislative accomplishments and rebuild a stable majority, McCarthy pitched himself as the only candidate capable of unifying the party. It certainly did not hurt that McCarthy has cultivated a close relationship with Trump, who once affectionately referred to the Californian as “my Kevin.” On Wednesday, he rejected a suggestion that Trump cost Republicans the majority, but acknowledged Republicans needed to make changes.

The fate of the Freedom Caucus — which wielded considerable influence while Republicans were in power, often to the annoyance of party leaders — was also in doubt. Without a foothold in the top leadership, their leverage appears destined to dissipate.

“I think it is important to have a debate, and that debate happened and was done in a very gentlemanly like fashion,” said Rep. Mark Meadows, R-N.C., a close ally of Jordan. “Now we have to work together going forward.”

House Democrats will not hold their leadership elections until later this month.

Republicans chose Rep. Steve Scalise of Louisiana to serve as their whip, the No. 2 position when the party does not hold the House majority. Scalise was grievously wounded last year when a gunman opened fire on a Republican congressional baseball team practice. The bullets nearly took his life, but he has re-emerged as a force among House Republicans; one of the conference’s most popular figures, he is seen as a potential successor to McCarthy.

Rep. Liz Cheney of Wyoming, the daughter of former Vice President Dick Cheney first elected to the House in 2016, will lead the Republican conference, the No. 3 position and a potential springboard into the upper echelons of Republican politics.

In the Senate, Republicans chose Mitch McConnell of Kentucky as majority leader for another term, his seventh as the Republican leader, in a contest free of any suspense. Sen. John Thune of South Dakota will serve as McConnell’s No. 2, filling the spot vacated by Sen. John Cornyn of Texas because of term limits. Republicans also added a woman to a previously all-male leadership team for the first time in a handful of terms: Sen. Joni Ernst of Iowa will serve as vice chairwoman of the Republican conference, the No. 5 position.

And after an election cycle in which they were able to limit losses on a deeply unfavorable map, Senate Democrats chose to keep intact their entire leadership team, led by Sen. Chuck Schumer of New York.

For House Democrats, the picture is more murky. Rep. Nancy Pelosi of California is trying to extend her 16-year run as the party’s leader and secure a second stint at speaker.

But a cadre of newly elected lawmakers and critics already in office believe they will have the necessary votes to deny her the speakership. They argue that the voters who pushed them into office want to see new blood atop the caucus, and warn that continued leadership by Pelosi and her lieutenants could deeply damage the party’s brand.