House Republicans muscle through Board of Governors picks 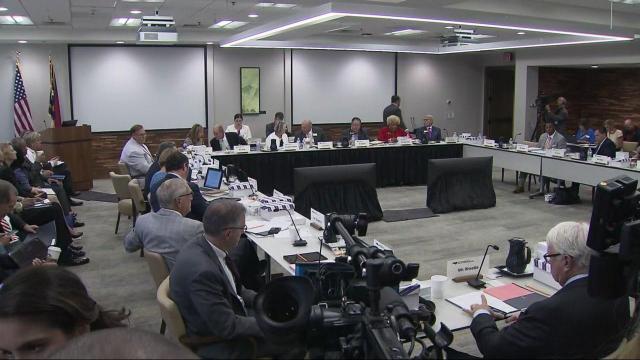 Raleigh, N.C. — House Republicans pushed through their picks for the UNC Board of Governors on Wednesday as Democrats begged them to reconsider and give the minority party at least some say in the board that oversees the state's public university system.

Instead, leadership put their six preferred candidates together on a slate to be voted up or down. The slate passed, 63-52. It's heavy on Republican political donors, and the appointees include a man two members of House leadership have worked for within the past three months.

Rep. Ken Goodman, D-Richmond, voted for the slate, and he's leaving the House for a job at the state Industrial Commission that requires legislative confirmation. At one point, freshman Rep. James Gailliard, D-Nash, told his Republicans colleagues they'd have to answer to God for all of their votes.

Rep. David Lewis, R-Harnett, who chairs the House Rules committee that put the appointments on the floor, defended the process, saying Democrats used the tactic at least twice when they were in power. He also pushed back against Democrats who said state law requires legislators to have a choice between candidates when it comes to the board.

"It does not say that that's the process that must be used," Lewis said.

Democrats tore into Board of Governors Chairman Harry Smith during the floor debate, blaming him for a rash of early departures by top system leadership, including Carol Folt, who left UNC-Chapel Hill in January and was announced Wednesday as the new president at the University of Southern California.

Rep. Graig Meyer, D-Orange, read aloud comments from Steve Long, another Republican member of the board, who said after East Carolina University Chancellor Cecil Staton was pushed out that Smith "has done damage" to the system and will continue to do so. Democrats also asked why Walter Davenport, a black Democrat on the Board of Governors now, wasn't reappointed.

Republicans did not answer.

"It's probably not in order for me to speak about an individual, or their individual issues, or any other issues that might come into play in this process," said Rep. Kelly Hastings, R-Gaston, who chairs the House Education/Universities committee.

Davenport will be replaced by a white attorney from Cumberland County, and Democrats repeatedly called on their Republican colleagues to reconsider the importance of racial and ideological diversity on the board.

House Republicans didn't rise to defend Smith or other current members of the board, many of whom will be reappointed. Only Lewis and Hastings spoke from the GOP side of the aisle, and House Speaker Tim Moore declined to speak with reporters after the vote. His spokesman said he didn't have time Wednesday for a the short session he typically holds with the press following newsy floor sessions.

After the vote, Smith said in a text message that people have different views on what's right in higher education and that the board is "working to solve real world issues to ensure long-term sustainability." He was a Senate appointee to the Board of Governors, and the board voted unanimously last year to name him chairman.

The House appointees approved Wednesday are:

House Majority Leader John Bell, R-Wayne, works at Sentinel Risk and recused himself from Wednesday's vote. Lewis worked there until December, he said earlier this week, and did not.

Mitchell is a friend of Moore's and part of the 751 South development in Durham; Moore has done legal work for some of the principals in the project, and he sponsored legislation to help the project in 2013.

The Board of Governors meets Thursday at Appalachian State University, and the Senate plans to name its new appointees Thursday. Leadership plans to let the chamber vote for six out of seven applicants. Those nominees are:

All these of these would be reappointments except for Holton and McGarry. Four other names were initially put in, but they withdrew their applications, leadership said. Their names are Kirk Bradley, Sharon Decker, Scott Lampe and Steven Wyatt.

Correction: This article has been edited to correct Pearl Burris-Floyd's party affiliation. She is a registered Republican.