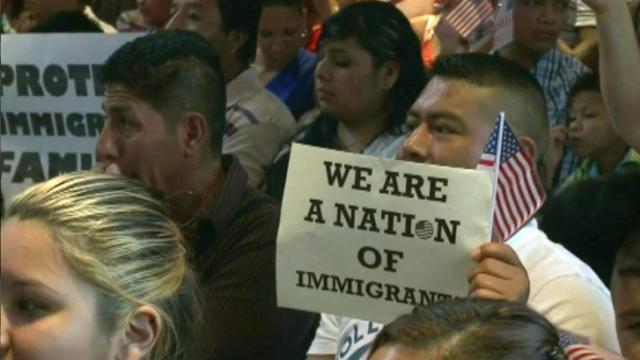 Raleigh, N.C. — Thousands of North Carolina businesses would have to start using a federal system to check their employees' immigration status under a bill that cleared the House on Thursday.

House Bill 318, dubbed the Protect North Carolina Workers Act, would lower the threshold for using the E-Verify system from 25 employees to five. Sponsor Rep. George Cleveland, R-Onslow, said that would add about 110,500 employers statewide to the immigration-check system.

"It's our responsibility to our citizens to make sure that they are not subsidizing illegals," he said during a lengthy debate that elicited claims of intolerance.

"To criticize people just because they use the word 'illegal' is living in a fantasy world," said Rep. Jeff Collins, R-Nash.

"We just need to have a little bit of compassion for people that, for reasons of economic strife or political strife in their homeland, sought the United States as a new homeland, a new place of opportunity," said Rep. Graig Meyer, D-Orange. "They don't want to be here to take away from anyone."

The bill would require cities and counties to use E-Verify for independent contractors, but it exempts farm workers and domestic help. The state's agricultural industry pushed back against efforts two years ago to expand E-Verify.

Rep. Ken Goodman, D-Richmond, said the 25-employee threshold was adopted two years ago as a compromise, and lowering it to five employees "creates a burden" for small businesses.

"They just can't comply as easily as a major manufacturer," Goodman said.

"We opened the barn door far too wide in the past. This is a corrective measure," said Rep. Chris Whitmire, R-Transylvania.

The bill, which now heads to the Senate after a 80-39 vote, also would eliminate the use of cards issued by foreign consulates as valid forms of identification to establish state residency or obtain insurance or public assistance.

Cleveland said the state started allowing consular cards as IDs about 20 years ago to help immigrants set up bank accounts and function in society, but the consulates never verified the identities of people who were issued cards.

"There is no reason, other than being an illegal alien in this state, for having a consular card," he said. "They have generated innumerable problems for the state."