With new footage, House managers show violent scenes from the Capitol riots in their case against Trump 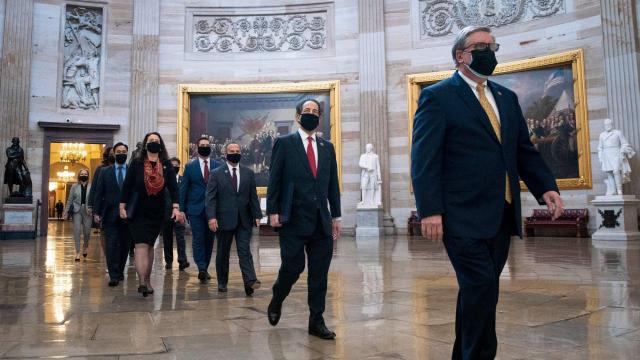 CNN — House impeachment managers Wednesday aired disturbing and gripping footage showing how rioters violently attacked officers as they breached the Capitol on January 6 -- and came dangerously close to reaching lawmakers and then-Vice President Mike Pence as they fled the House and Senate.

The House's presentation included never-before-seen Capitol security camera footage, body camera footage from local Washington, DC police and police radio dispatches, providing the fullest view to date of how the Capitol was overrun and the grave threat the rioters posed to everyone in the Capitol, including the senators now acting as the jury in former President Donald Trump's impeachment trial.

The footage included images of officers being beaten by the rioters as well as showing just how close the mob inside the Capitol came to reaching lawmakers. The House managers showed security footage of senators fleeing their chamber, with Capitol Police officers between them and rioters just steps away.

The violent footage was intended to drive home the House impeachment managers' overarching case: that Trump was responsible for inciting the rioters who attacked the Capitol, as they sought to violently stop Congress from certifying Trump's election loss and assassinate Pence and House Speaker Nancy Pelosi.

"They were coming at the urging of Donald Trump to keep Congress, a separate branch of government, from certifying the results of a presidential election," said Del. Stacey Plaskett of the Virgin Islands, one of the impeachment managers who presented the new footage. "Vice President Pence was threatened with death by the President's supporters because he rejected President Trump's demand that he overturn the election."

Inside the Senate chamber, which was ransacked in the riots, senators from both sides of the aisle sat in rapt attention as the first pieces of video played. When the impeachment managers began their presentation, which showed a step-by-step timeline with graphics of the Capitol, many Senators strained in their seats to get a better view of the video monitor. On the Republican side, senators showed little emotion -- but all were paying close attention, many only turning their heads away from the video screens to take notes.

Republican senators said that the videos were disgusting and painful to watch and relive.

"We lived this once and that was awful. And we're now we're living with a more comprehensive timeline," said Alaska Sen. Lisa Murkowski, an Alaska Republican. "I wasn't fully aware of everything else that was happening in the building and so when you see all the pieces come together. Just the total awareness of that the enormity of this, this threat, not just to us as people, as lawmakers, but the threat to the institution and what Congress represents. It's disturbing. Greatly disturbing," she added.

"It was extremely quiet -- you could have heard a pin drop," Sen. Susan Collins of Maine said of the atmosphere in the Senate chamber.

GOP members praised the presentation, with No. 2 Senate Republican John Thune of South Dakota saying they did an "effective job" and were "connecting the dots" from Trump's words to the insurrection. Still, there's no sign that Senate Republicans are going to consider convicting Trump, no matter how compelling the Democrats' presentation may be.

Forty-four of the 50 Senate Republicans voted Tuesday that the trial was unconstitutional, a defense most if not all of those senators are likely to cite if they vote to acquit Trump.

"They spent a great deal of time focusing on the horrific acts of violence that were played out by the criminals, but the language from the President doesn't come close to meeting the legal standard for incitement," said Sen. Ted Cruz, a Texas Republican.

When it's their turn to speak, Trump's defense team is expected to argue that House impeachment managers were "glorifying violence" when they recreated the Capitol insurrection.

"I didn't learn anything that I didn't already know. We know a mob breached the Capitol and wreaked havoc in the building. I'm waiting for them to connect that up to President Trump and so far that hadn't happened," Trump's attorney Bruce Castor said after the House Democrats' presentation.

'Could have been a lot worse'

Plaskett and Rep. Eric Swalwell of California methodically walked through how the rioters breached the Capitol and overtook the building, attacking police officers for several hours even after lawmakers had been whisked away to safety.

The footage included previously unknown -- and disturbing details. That included Capitol Police officer Eugene Goodman, who heroically lured rioters away from the Senate doors as they chased him up the stairs, running through the Capitol hallways to respond to the rioters and discovering Republican Sen. Mitt Romney of Utah heading toward the rioters, getting Romney and an aide to quickly turn around to safety.

Romney said he did not know Goodman was the one who stopped him. "I look forward to thanking him when I next see him," he told reporters. Before the Senate trial resumed Wednesday evening, Romney was speaking to Goodman in the chamber.

The Democrats showed how rioters were calling out for Pelosi as they moved through the halls of the Capitol, before showing new security footage of Pelosi's staffers barricading themselves into a conference room not long before rioters entered her office, trying to force open the door where the aides were in hiding. Plaskett showed how photos in which of one of the insurrectionists who ransacked Pelosi's office can be seen with a stun gun.

Plaskett said that the rioters were just 100 feet from Pence from where Pence was sheltering, and Swalwell said the senators leaving their chamber were just "58 steps away from where the mob was amassing."

"We all know that awful day could have been a lot worse," Swalwell said. "You know how close you came to the mob. Some of you I understand could hear them, but most of the public does not know how close these rioters came to you."

Swalwell concluded by showing footage of police officers being violently attacked by the rioters, including one officer screaming for help as he was pressed up against a Capitol door. The footage included a Washington, DC, Metropolitan Police officer who was violently attacked with weapons and tased by the rioters while guarding the front of the Capitol.

"This body camera footage is from 4:27 p.m., over two hours from when the Capitol was breached," Swalwell said. "The attack on police that afternoon was constant."

'The culmination of Trump's conduct over several months'

Before walking through the violent attack on the Capitol, the House impeachment managers began their two-day presentation by seeking to connect the violence to Trump's months of false statements about election fraud and his refusal to concede, arguing that his speeches were designed to anger and incite his supporters, so they were ready to fight when they marched to the Capitol on January 6.

Throughout the day, the managers charged that Trump engaged in a months-long campaign to falsely convince his supporters that the election was stolen, whipping them into a state of anger over the false belief the results were fraudulent and inciting his followers to violently disrupt the peaceful transfer of power.

"His false claims about election fraud, that was the drumbeat being used to inspire, instigate and ignite them, to anger them," said Rep. Joe Neguse of Colorado, one of the House impeachment managers. "The President had spent months telling his supporters that the election had been stolen, and he used this speech to incite them further to inflame them to 'stop the steal,' to stop the certification of the election results."

Rep. Jamie Raskin of Maryland, the lead impeachment manager, kicked off the House's presentation arguing that the January 6 riot was the culmination of Trump's conduct over several months falsely claiming the election had been stolen. Then after the rioters attacked the Capitol in the deadly riot, Trump praised them, Raskin said.

The opening hours of the managers' presentation focused on Trump's statements both before and after the election, in which he repeatedly made false claims that the only way he could lose the election was if it was stolen and spread false conspiracies about widespread voter fraud.

The impeachment managers walked through how Trump tried in multiple ways to overturn the election result, from filing dozens of lawsuits to pressuring state election officials, including Georgia Secretary of State Brad Raffensperger. Ultimately, the managers argued, Trump turned to the congressional certification on January 6.

The personal nature of the trial to both the House managers and senators, endangered on the day of the riots, loomed over the proceedings. Rep. Madeleine Dean of Pennsylvania choked up as she closed her remarks by describing the loud bang that was heard when she was in the chamber that had been surrounded by rioters.

"So they came, draped in Trump's flag, and used our flag, the American flag, to batter and to bludgeon," Dean said. "And at 2:30 p.m., I heard that terrifying banging on those House chamber doors."

The House's presentation is continuing into the evening Wednesday, and they will conclude their argument on Thursday. Trump's team will begin on Friday.

Republicans say they can't be swayed

While the managers' case was moving to many of the senators who were forced to flee from the rioters on January 6, there still does not appear to be a path to reach the two-thirds vote necessary to convict Trump and bar him from running for future office.

House Democrats are urging Senate Republicans to solely consider the merits of the case and separate out their concerns about whether the trial is constitutional. Many GOP senators publicly and privately are signaling to CNN that they won't do that, the latest sign of the high hurdles Democrats face in getting to 67 votes to convict.

"The underlying issue is too critical in my opinion," Sen. Mike Rounds of South Dakota told reporters. "I've continued to say that it is not constitutional to impeach and convict a former president."

Trump's lawyers, Castor and David Schoen, will have up to 16 hours over two days to make a more detailed case against the impeachment charge beginning Friday, though they aren't expected to use all of that time.

After Tuesday's rambling presentation was criticized by Republicans -- and enraged the former president -- Trump's legal team is scrambling to collect and produce more videos to bolster their arguments, according to a person familiar with the discussions. The move to use more videotape -- and lean away from in-person arguments -- amounts to a tacit acknowledgment that the lawyers Trump has enlisted to defend him during his second impeachment trial are failing to inspire confidence.

After Trump's team wraps up, the Senate will have up to four hours to ask written questions to the legal teams, and then the House managers could seek a vote on hearing from witnesses. But it's not clear yet they plan to do so.

Senate Minority Leader Mitch McConnell walked his conference through the impeachment timeline on Wednesday during the private GOP lunch, laying out that it was still possible to finish the impeachment trial by Saturday evening, according to GOP Sen. Kevin Cramer of North Dakota.

Finishing by Saturday would mean that they would do senators' questions, closing arguments and the final vote that day -- and push back doing senators' final speeches until later. The ultimate vote has not been decided, in part because the question about whether Democrats will seek witnesses is still not fully resolved, but all signs point to the trial ending this weekend.

This story and headline have been updated with additional developments Wednesday.