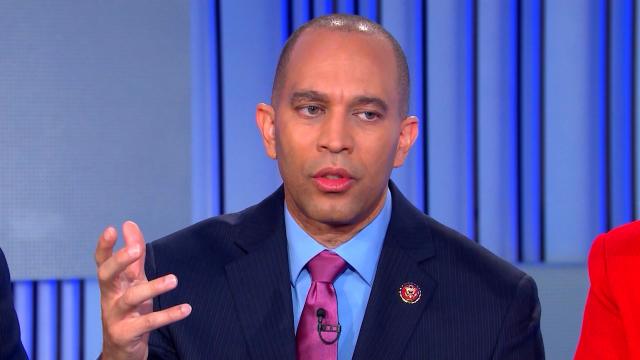 CNN — Democratic House impeachment managers believe President Donald Trump has not learned anything from his recently concluded impeachment trial and will likely continue the same behavior while in office, they told CNN in an exclusive interview.

"Of course he hasn't learned a lesson," Democratic Rep. Hakeem Jeffries of New York told CNN's Anderson Cooper in an interview, a clip of which aired Friday morning on "New Day." Cooper sat down with all seven Democratic lawmakers who argued the case against Trump, and the interview will air in full Friday at 8 p.m. ET. on "Anderson Cooper 360."

Trump's impeachment trial ended Wednesday with the Republican-led Senate finding him not guilty of abuse of power and obstruction of Congress. The President's pressure on Ukraine to announce investigations into his political rivals while withholding nearly $400 million in US security aid to Ukraine and a White House meeting were at the center of the inquiry.

The next day, Trump took a victory lap in a vindictive White House speech in which he gave no indication that he considered his actions wrong or regrettable.

Rep. Val Demings of Florida called Trump a "habitual offender" and pointed to his behavior after the special counsel investigation.

"We have no reason to believe that this President has learned anything," Demings said. "If he had, perhaps he would have began the State of the Union address the other night by apologizing to the American people. That what he did was wrong and he's regretful for it. We haven't heard that."

The Republican-led Senate concluded its trial without allowing subpoenas for additional witnesses or documents. Democrats pushed to hear from Trump's former national security adviser John Bolton, who alleges in a draft manuscript of his yet-to-be-published book that the President told him he wanted to continue holding military aid to Ukraine until the country helped with investigations into Democrats, according to The New York Times.

Lead impeachment manager Adam Schiff told CNN that Bolton's counsel had refused to give a sworn affidavit in the Senate trial after senators voted down additional testimony.

"He will have to explain at some point why he is willing to put this in a book but not in an affidavit under oath," Schiff said, calling it "fairly inexplicable."

A Bolton aide did not respond to a request for comment when asked about Schiff's assertion, which he also made earlier in the week.