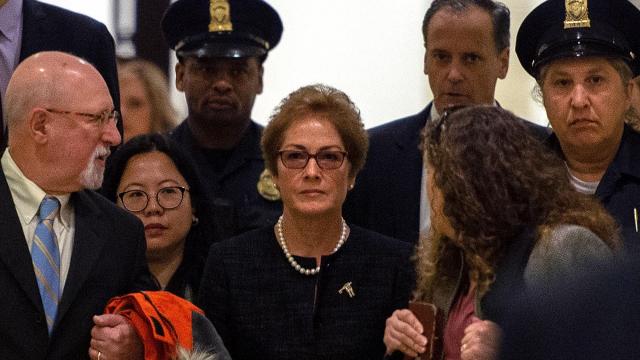 CNN — Secretary of State Mike Pompeo and other State Department leaders were silent when faced with a campaign from Rudy Giuliani to oust then-US Ambassador to Ukraine Marie Yovanovitch amid concerns that President Donald Trump would undermine them, according to testimony released from Yovanovitch and former State Department official Michael McKinley.

Transcripts of Yovanovitch and McKinley's closed-door depositions, which were released Monday by the committees leading the impeachment inquiry into Trump and Ukraine, show that McKinley cited Yovanovitch's removal and the use of ambassadors "to advance domestic political objectives" as reasons for his resignation last month. McKinley testified that he raised the idea of sending a statement of support for Yovanovitch three separate times with Pompeo and never received a substantive response.

And Yovanovitch told lawmakers she also pushed the State Department to speak up and defend her amid the attacks from Giuliani and his associates, but her requests went unanswered amid concerns about how Trump might respond, possibly by using Twitter.

"What I was told is that there was concern that the rug would be pulled out from underneath the State Department if they put out something publicly," Yovanovitch said according to a transcript of a closed-door interview released publicly Monday. "You know, that perhaps there would be a tweet of disagreement or something else."

READ: Testimony from former US Ambassador to Ukraine Marie Yovanovitch

The three committees leading the House impeachment inquiry — Intelligence, Foreign Affairs and Oversight — released the Yovanovitch and McKinley transcripts Monday, the first public transcripts that have been released as Democrats prepare to take their impeachment case public with hearings later this month. House Intelligence Chairman Adam Schiff, a California Democrat, said more transcripts would be coming this week, including former special envoy for Ukraine Kurt Volker and US Ambassador to the European Union Gordon Sondland on Tuesday.

The transcripts from Yovanovitch and McKinley are the first that have been released, and House Intelligence Chairman Adam Schiff, a California Democrat, said more would be coming this week, including former special envoy for Ukraine Kurt Volker and US Ambassador to the European Union Gordon Sondland on Tuesday.

Yovanovitch, whose ouster earlier this year has emerged as a key flashpoint in the impeachment inquiry, testified in private before House investigators on October 11. A career foreign service officer, Yovanovitch said she was removed from her diplomatic post because of pressure from Trump and his allies, including his personal attorney Rudy Giuliani.

Democrats are investigating the circumstances surrounding her removal because it points to the broader role that Giuliani played in US-Ukraine policy that goes beyond just the push for Ukraine to announce an investigation into the President's political rivals.

Yovanovitch said that she had urged the State Department to put out a statement of support amid attacks from the President's allies — and his son, Donald Trump Jr. — but such a statement never came.

"If you have the President's son saying, you know, We need to pull these clowns, or however he referred to me, it makes it hard to be a credible ambassador in a country," she said.

According to the transcript, Yovanovitch said she was "shocked" and "apprehensive" when she learned that Trump privately told Ukrainian President Volodymyr Zelensky that she was "going to go through some things."

Despite platitudes from colleagues, who describe Yovanovitch as a devoted public servant, Giuliani spread allegations that she was an anti-Trump partisan who should be removed. She testified that she was informed that Trump personally requested that she be recalled back to the US, and that she was told at 1 a.m. local time "that I needed to be on the next plane home to Washington."

Yovanovitch told the committees that she first learned from Ukrainian officials in late 2018 about attempts by Giuliani and his associate, the ex-prosecutor general of Ukraine Yuriy Lutsenko, to damage her reputation. She said it was people inside the Ukrainian government who told her Giuliani and Lutsenko "had plans, and that they were going to, you know, do things, including to me."

She said that she was warned in February by a Ukrainian official to "watch my back," pointing to the efforts from Giuliani and his associates Lev Parnas and Igor Fruman, who were indicted last month on campaign finance charges.

Yovanovitch said Giuliani's shadow diplomacy "cut the ground out from underneath us" at the US embassy and hampered her efforts to represent the US as the senior-most diplomat in Ukraine.

"Ukrainians were wondering whether I was going to be leaving, whether we really represented the President, U.S. policy, et cetera," Yovanovitch said.

Yovanovitch said she couldn't grasp at the time what was happening because it was so outside the realm of normal.

After there were stories written about her, Yovanovitch said she reached out to Sondland for advice, and he suggested she needed "to go big or go home" to respond, proposing that she put out a tweet stating her support for the President.

"Obviously, that was advice," Yovanovitch said. "It was advice that I did not see how I could implement in my role as an Ambassador, and as a foreign service officer."

Yovanovitch also said that the Trump administration made no effort to verify the accusations being made against her.

"Until today, nobody has ever actually asked me the question from the US government of whether I am actually guilty of all of these things I'm supposed to have done," she said. "Nobody even asked, because I think everybody just thought it was so outrageous."

Yovanovitch said there was "no official policy" at the State Department to link Ukraine aid to investigations of former Vice President Joe Biden or his son Hunter, who was hired by Burisma. But after reading texts between Volker, Sondland and the top US diplomat in Ukraine Bill Taylor, which were released by House Democrats early in the inquiry, Yovanovitch wondered "whether there was an unofficial policy."

Yovanovitch said she was told in early 2016 by Ukraine's interior minister Arsen Avakov that he believed it "dangerous" to engage with Giuliani "because of his concerns about what they were doing."

Trump's Republican allies pressed Yovanovitch during the deposition on which presidential candidate she supported in the Ukrainian election this year, Zelensky or Petro Poroshenko. Yovanovitch pushed back on these assertions and said that she did not have a dog in the fight, but was there to provide reliable political analysis and represent the interests of the US.

"I thought that Poroshenko's time was up, because the Ukrainian people were so angry with him, and that we needed to make the best efforts we could to work with Zelensky so that it would be a strong bilateral relationship," Yovanovitch testified.

McKinley, a senior adviser to Pompeo who resigned amid the Ukraine controversy, testified behind closed doors on October 16. He raised concerns about Yovanovitch's removal, which was pushed by Giuliani and has become a central part of the inquiry.

McKinley testified that he chose to resign because in part because of what he saw as the use of ambassadors "to advance domestic political objectives."

"The timing of my resignation was the result of two overriding concerns: the failure in my view, of the State Department to offer support to Foreign Service employees caught up in the impeachment inquiry; and, second, by what appears to be the utilization of our ambassadors overseas to advance domestic political objectives," McKinley said. "To see the emerging information on the engagement of our missions to procure negative political information for domestic purposes, combined with the failure I saw in the building to provide support for our professional cadre in a particularly trying time, I think the combination was a pretty good reason to decide enough, that I had no longer a useful role to play."

McKinley said that he raised the Yovanovitch matter with Pompeo three times, but did not receive a response from the secretary of state, including when he told Pompeo he was departing.

"I spoke with the Secretary again when he called from Europe to discuss my resignation," McKinley said. "I was pretty direct. I said, 'You know, this situation isn't acceptable. We need to you know, I've already made my recommendation, but ... I am resigning.' And that was the conversation. Again, I didn't get a reaction on that point."

McKinley told lawmakers that he learned of Giuliani's efforts in Ukraine through the media, but he did not speak to anyone at the State Department about it.

"I don't think his name ever crossed my lips," McKinley said. "And no one spoke to me about Rudy Giuliani."

Kent told McKinley that Kent was questioning why the document requests from Congress were not being delivered to him from higher-ups at the State Department on a "timely basis." McKinley said Kent also raised concerns that a letter from Pompeo back to the House committees contained "inaccuracies" about protecting or providing legal support to State employees who might speak with Congress. McKinley said he was "absolutely appalled" that State was declaring that there would be no financial support for officials' private counsel.

"He also mentioned that he thought that the (State Department) lawyer was trying to shut him up, and so I didn't tell him to write it up." McKinley said Kent wrote up the details of what he conveyed and sent it in an email to McKinley that evening.

This story has been updated with additional developments and will continue to update Monday.