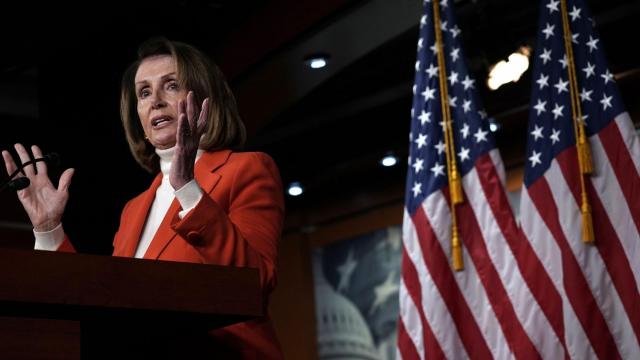 (CNN) — House Democrats overwhelmingly picked Nancy Pelosi to be their nominee for House speaker on Wednesday at a closed-door meeting, bringing the long-time Democratic leader one step closer to reclaiming the gavel when Democrats take control of the House of Representatives in the new year.

Pelosi was nominated as speaker by House Democrats by a 203-32 vote, according to attendees in the room. Three ballots were blank. One was absent.

A small, but vocal, faction of Democrats have been attempting to derail Pelosi's run for speaker, but she has succeeded in winning over a number of critics in recent days and was expected to easily win the nomination since it required only a majority of House Democrats. The make-or-break moment for Pelosi isn't expected to come until January, when the full House holds a final floor vote to elect the speaker.

House Democrats are also holding elections on Wednesday for positions lower in the leadership hierarchy.

The first election to be decided was for the position of Democratic caucus chair. Rep. Hakeem Jeffries of New York was elected to the post, making him the No. 5-ranked Democrat next Congress. The vote was close, 123-113. He defeated Rep. Barbara Lee, who would have been the first African-American woman in Democratic leadership.

At 48, Jeffries is relatively young compared to the rest of the caucus and a rising star in the Democratic Party. Winning the position of caucus chair will elevate him further in the party's hierarchy and give him an opportunity to wield more power and influence. With Rep. Jim Clyburn's expected ascent to the majority whip position, Jeffries' win means that two of the top five leadership positions in the Democratic caucus will be held by African-American members.

Lee, who is 72, said on Wednesday that she felt there were "institutional barriers" in her way.

"You feel some disappointment only with the institutional barriers that I recognized that were out there during this campaign. I'm really disappointed in that, knowing this was an uphill battle," she said.

Asked if she felt ageism and sexism were at place, Lee said yes. "You heard and saw what took place, so absolutely, I think that is the case," she said.

"We still have many glass ceilings to break," she added.

Speaking to reporters after winning his election, Jeffries said he wanted to thank Lee "for her tremendous service to this nation" and characterized the race very differently: "From the very beginning through the very end, this was a friendly contest of ideas."

The elections are currently ongoing at the Capitol and will continue throughout the day.

Inside the room where Democrats are voting, Rep. Joe Crowley, the outgoing caucus chair who lost his primary to incoming freshman lawmaker Alexandria Ocasio-Cortez in an upset, sang an Irish ballad to the House Democratic Caucus, two members present told CNN. The caucus gave him a standing ovation.

There isn't expected to be much suspense or surprise in most of the other high-profile leadership races on Wednesday since the next three highest-ranking positions after Speaker -- majority leader, majority whip and assistant Democratic leader -- all feature only one candidate.

Reps. Steny Hoyer and Clyburn, the respective current No. 2 and No 3. House Democrats, are running to maintain their same rank in the new Democrat-led Congress, keeping in place a Democratic leadership team that has been in power for years.

The position of assistant Democratic leader in the new Congress also has just one candidate: New Mexico Rep. Ben Ray Luján, who currently serves as chair of the House Democratic campaign arm.

Unlike many of the other races, the DCCC chair election features a crowded field.

Reps. Denny Heck of Washington, Cheri Bustos of Illinois, Suzan DelBene of Washington and Sean Patrick Maloney of New York are all running for the post.

On Tuesday, Maloney asked for a delay in the DCCC chair election after being "hospitalized Monday with an urgent but temporary medical condition" stemming from "a persistent bacterial infection that spread to a number of his internal organs," according to a statement from his office.

The statement said that Maloney would withdraw as a candidate if there is not a delay in the election. It's not yet clear if the election will be delayed.

Pelosi's path to the speakership

Pelosi and her allies have been working to make deals with some of her critics and win over detractors -- and have several more weeks to continue doing so if they deem it necessary to shore up support before the January vote.

On Wednesday, the Democratic members of a group known as the problem solvers caucus put out a statement saying that they had reached an agreement with Pelosi that would "help break the gridlock" in Congress. Nine of the House Democrats who are members of the caucus had previously said they would not vote for Pelosi unless she endorsed their proposed changes to House rules.

In another sign that Pelosi's bid could be gaining momentum, Rep. Stephen Lynch, one of the Democrats who previously signed a letter calling for new leadership, walked out of the caucus meeting on Wednesday side-by-side with Nancy Pelosi as cameras flashed all around them.

Speaking to reporters afterward, Lynch said he told Pelosi that he can be persuaded to support her and that they're going to have a conversation later Wednesday.

He didn't rule out the idea that he could possibly vote for Pelosi as soon as today. "I'm persuadable," he said.

But it was also clear on Wednesday that Pelosi has not eliminated the opposition to her becoming speaker.

Rep. Kathleen Rice, a Pelosi critic, said in a statement that she and others "met with Leader Pelosi and tried to engage her in a reasonable conversation about leadership transition," on Wednesday. But, Rice said, "Unfortunately, our concerns were dismissed outright," adding, "We remain united behind our goal of new leadership and intend to vote against Leader Pelosi in Caucus and on the Floor of the House."

A source told CNN that Rice along with Pelosi critics, Reps. Seth Moulton and Tim Ryan were present at the meeting, which took place in Pelosi's office.

Moulton later released a statement on the meeting as well. "I am disappointed to report that no agreement was reached in this initial meeting," he said, but added, "We are hopeful Leader Pelosi will invite us back to the table to plan for the future success of the Democratic Party."

Earlier this month, Pelosi won the support of Rep. Marcia Fudge of Ohio, who had previously criticized her and publicly toyed with the idea of challenging her. At nearly the same time that Fudge announced she would vote for Pelosi for speaker, Pelosi announced that she will make Fudge the chair of an elections subcomittee in the new Congress.

In another example of Pelosi's powers of persuasion at work, Rep. Brian Higgins of New York came out in support of her Speakers' bid last week despite previously signing onto a letter calling for new leadership. When Higgins reversed course, he told CNN that he got Pelosi to commit to prioritizing a $1 trillion infrastructure bill and a measure to allow people 50 and older to buy into Medicare.

Pelosi does still face some opposition within her caucus, however, though she and her allies continue to express confidence that she will ultimately win.

Earlier in the week, Pelosi detractors added another rebel to their ranks when Gil Cisneros, a Democrat who recently won a race in a conservative district in California, announced he would sign the letter pledging not to support her on the floor.

To secure the nomination on Wednesday, Pelosi will only need a majority vote in the Democratic caucus.

She will face a higher hurdle in the final vote in January when she will have to win a majority of all members of the House who are present and voting -- typically 218, though it would be possible for her to win with fewer votes in certain scenarios.