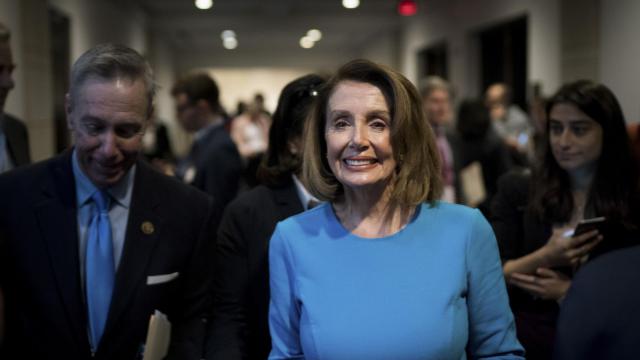 WASHINGTON — Rep. Nancy Pelosi overwhelmingly won the Democratic nomination on Wednesday to be speaker when the new Congress convenes in January, but the defection of 32 Democrats signaled that she could still face a divisive fight to lead the House just as the party assumes control.

The result kept alive the threat of a messy intraparty feud and touched off what promises to be an intense period of internal arm-twisting and cajoling by a leader renowned for both. At the same time, it confirmed that despite a drumbeat of calls within her caucus for new leadership, most Democrats support returning the 78-year-old Californian, the first woman to be speaker, to the post.

In a secret-ballot vote that dramatized rifts among Democrats only weeks after midterm election victories handed them the majority, Pelosi, running unopposed, won support from 203 Democrats. Beyond the 32 no votes, three ballots were left blank.

“It’s a big victory,” she exulted as she made her way to the Capitol after the results were announced, brushing aside questions about her detractors and saying she felt “great.”

To become speaker, Pelosi must win 218 votes in a House floor vote on Jan. 3. That gives opponents time to recruit a serious challenger, something they have said could occur only once they showed that she lacked the votes to be elected.

But the tally also demonstrated the limits of a group of dissidents who want fresh faces at the top of the party. They include newcomers who campaigned promising to change Congress, some of whom made explicit pledges not to vote for Pelosi, who has led House Democrats for more than 15 years.

Speaking with reporters as the votes were tallied, Pelosi hinted that she expected her opposition to erode.

“I think we’re in pretty good shape,” she said. “I don’t want to make other people’s announcements for them, but we go forward with confidence and humility.”

But some of those who voted against her on Wednesday said they were repelled by the politicking that has defined the speakership fight so far, and were determined to maintain their opposition in part because of it.

“I made a promise to the voters of my district that I would be a no — no under any circumstances,” said Rep.-elect Max Rose of New York, adding that he was mystified that journalists continued to ask him whether he would change his position.

“What it speaks to, though, is a culture of politics in this town where people change their opinions,” Rose said. “So I’m not swaying with the wind, and I believe that many of us members came here to D.C. not for just one fight, but to change politics in this country.”

Just before the balloting began, Pelosi dispensed with one major obstacle that had threatened to strengthen her foes, securing the support of a small but critical bloc of Democrats after she agreed to change House rules to give rank-and-file members more influence in Congress.

After painstaking negotiations that stretched into the wee hours of Wednesday, Pelosi struck a deal with the Problem Solvers Caucus, which had withheld its support until it secured changes that its members said would break partisan gridlock by empowering lawmakers to forge bipartisan compromises. The deal, the latest example of Pelosi’s quiet campaign to wear down opponents, came minutes before Democrats began formally nominating her for the post, and not long before the start of the vote testing the strength of her support.

“We have reached such an agreement with Leader Pelosi to help break the gridlock for the American people and will support her,” the Problem Solvers said in a statement. The deal won her the backing of eight members.

But Pelosi still faces determined opposition from others, including members of a group of 16 Democrats who signed a letter last week calling for new leadership. Their three leaders met with the minority leader before the vote on Wednesday and emerged declaring themselves unmoved.

Rep. Seth Moulton of Massachusetts, an organizer of the group, said their request of Pelosi had always been: “Produce a meaningful plan for a leadership transition, as you promised in the summer, to allow a new generation of leadership to step forward.”

He said he was “disappointed to report that no agreement was reached in this initial meeting,” but “hopeful” of continuing talks with Pelosi.

With Democrats so far in control of 234 seats for the next Congress, Pelosi can afford to lose no more than 16 Democrats in the Jan. 3 roll call vote if all lawmakers are present and voting. That margin may change as additional races are called.

“None of us wants to have a floor fight, but voters have to be heard — we need to protect new members,” said Rep. Kathleen Rice of New York, who attended the meeting along with Moulton and Rep. Tim Ryan of Ohio. Several of the newly elected members won in competitive districts after promising not to support Pelosi for speaker, and they risk losing their seats if they go back on their word.

“We just elected the most diverse group of members that has ever been elected to the House in our history,” Rice added, “and they deserve to know when the leadership is going to change.”

Along with Pelosi, Democrats moved unanimously to return their other two top leaders, forgoing a vote and electing Rep. Steny H. Hoyer of Maryland, 79, as the majority leader and Rep. James E. Clyburn of South Carolina, 78, as the whip. The results amounted to a resounding endorsement of a leadership team that has remained unchanged for more than a decade, a remarkable reality for a party whose new face is one of generational, racial and cultural transformation.

Still, the election did yield the promise of a new generation of leaders. Democrats chose Rep. Ben Ray Luján of New Mexico, the 46-year-old chief of the party’s House campaign committee, for the fourth-ranking position of assistant majority leader. And Rep. Hakeem Jeffries, 48, of New York, who has been a leading voice in favor of generational change within the party, was elected chairman of the caucus, the No. 5 post. Taken together, their elevation reflected a new sense of urgency among House Democrats after midterm election victories ushered in a disproportionately young class of freshmen eager to shake up the stilted ways of Washington and infuse a different set of voices into their party leadership.

Jeffries beat out an icon of the left, Rep. Barbara Lee of California, who would have been the first black woman to be elected to that post. Lee, at 72, would also have been the fourth septuagenarian in the House Democratic leadership. The contest between two members of the Congressional Black Caucus split Democrats, with 123 supporting Jeffries, who represents Brooklyn and Queens, and 113 siding with Lee.

Lee said after the vote that she “absolutely” thought that sexism and ageism had been at work in the contest.

“That’s something women, especially women of color and African-American women, have to fight constantly, each and every day,” she said, adding, “We still have many glass ceilings to break.”

In impassioned speeches to an ornate hearing room full of Democrats on Wednesday afternoon before the vote, Pelosi’s allies argued that she was the best person to take on President Donald Trump and outmaneuver Republican congressional leaders at a critical time for the country.

Rep. Adam B. Schiff of California, who is in line to become chairman of the Intelligence Committee, became emotional as he made the case for Pelosi.

“Everything we care about is now at risk,” Schiff said, according to people in the room, mentioning families who lack health insurance, children separated from their parents and autoworkers who have lost their jobs. “Press characterized as the enemy of the people, the independence of our justice system being undermined. We have the most immoral, unprincipled and dangerous president in our history.”

Although she easily won the nomination, Pelosi’s victory carried notes of caution for a leader who has proclaimed unequivocally that she had the votes to become speaker. Those who have pressed for a new leader have long believed that after they showed she did not have such support, they could force a debate over an alternative candidate for speaker, a clear time limit on her tenure or a compromise in other leadership posts that would ensure a generational change at the top — all options Pelosi has refused to consider.

But Pelosi, who excels at legislative haggling and the corralling of a sometimes fractious group of Democrats, has demonstrated in the past that she has the capacity to win over dissenters with a mix of sweeteners and unspoken threats. The last time she faced opposition, when Ryan challenged her for minority leader in 2016, she lost 63 Democrats, almost twice the number that voted against her on Wednesday.

Her deal with the Problem Solvers Caucus appeared to ease her path considerably. Among the changes she agreed to were one that would make it easier for “consensus” bills — those that gain at least 290 co-sponsors — to get a vote on the House floor, and for bipartisan amendments, with at least 20 members of each party supporting them, to be considered in committees.

Another notable change would eliminate the ability of one member to essentially force a vote of no confidence in the speaker, a threat that has allowed the House Freedom Caucus, a group of ultraconservative Republicans, to handcuff the speaker, and ultimately led to the resignation of Speaker John A. Boehner in 2015. Instead, the move would have to be initiated by a party caucus or conference.