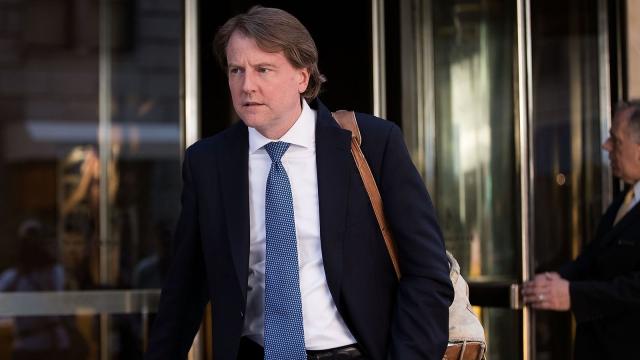 CNN — The House Judiciary Committee on Wednesday filed suit to compel former White House counsel Don McGahn's testimony, arguing that the committee needs to hear from him to determine whether it should consider articles of impeachment against President Donald Trump.

"The Judiciary Committee is now determining whether to recommend articles of impeachment against the President based on the obstructive conduct described by the Special Counsel. But it cannot fulfill this most solemn constitutional responsibility without hearing testimony from a crucial witness to these events: former White House Counsel Donald F. McGahn II," the lawsuit says.

The House's arguments Wednesday have some of the strongest language yet before a judge that they're working toward formal impeachment proceedings over whether Trump obstructed the Russia investigation, and the lawsuit sets the stage for a precedent-setting legal showdown between the White House and Congress over executive privilege.

McGahn's attorney William Burck said in a statement that "when faced with competing demands from co-equal branches of government, Don will follow his former client's instruction, absent a contrary decision from the federal judiciary."

"People should not forget that Don McGahn is a lawyer and has an ethical obligation to protect client confidences, and as I have said before, Don does not believe he witnessed any violation of law," Burck said. "And the President instructed Don to cooperate fully with the Special Counsel but directed him not to testify to Congress unless the White House and the Committee reached an accommodation."

Trump directed McGahn to flout the committee's subpoena for documents and testimony following the publication of the report by former special counsel Robert Mueller, and the Trump administration has argued that McGahn and other close advisers to the President have "absolute immunity" from congressional testimony due to executive privilege.

The outcome of the court fight that Democrats started on Wednesday could set the precedent for a litany of House subpoenas attempting to obtain documents or compel testimony from various officials in the Trump administration, as well as for future fights over executive privilege between the executive and legislative branches.

The House's effort to get a court to force McGahn to testify comes as the Judiciary Committee has ramped up their investigations into the President and more than half of House Democrats have said they support starting an impeachment inquiry. The committee last month filed suit to obtain Mueller's secret grand jury material collected in the investigation, arguing that it also needed that information to determine whether to consider articles of impeachment against the President. The House is also seeking Trump's financial records through other federal lawsuits, as committees investigate the President's ethics and possible foreign influence over the administration.

House Judiciary Chairman Jerry Nadler said last month that his committee was "in effect" already conducting an impeachment inquiry, even though the House has not taken such a vote. Committee aides say that a formal vote is not necessary, because the probe they began in March will help Democrats decide whether to pursue impeachment.

Earlier this week, Nadler laid out a timeline for impeachment, saying that his panel could move to impeach Trump by the end of the year — an ambitious timeline given the multiple court cases the committee is fighting. Democratic committee aides said Wednesday that they hoped to convince the court that the case was an "emergency" to expedite the court proceedings.

House Speaker Nancy Pelosi referenced the lawsuit in a letter to colleagues Wednesday, in another signal that she's opening the door to considering impeachment. Pelosi cited the committee's earlier lawsuit that argued it the information for the House to consider "'whether to exercise its full Article I powers, including a constitutional power of the utmost gravity — approval of articles of impeachment.'"

Pelosi signed off on the language in the McGahn lawsuit that said that the committee was trying to decide whether to impeach Trump, according to an aide to the speaker.

McGahn's testimony is a key piece of that effort, Democrats say, because he was a key witness in the Mueller report -- especially its second section, about instances when the President may have attempted to obstruct the investigation. The special counsel's investigation documented how Trump told McGahn to fire the special counsel, which he did not do, and then told McGahn to lie publicly about Trump telling him to dismiss Mueller. McGahn's statements to Mueller's team were cited more than 150 times in the report -- more than any other witness.

Democrats tried to bring in McGahn before Mueller testified last month, and issued a subpoena for documents and his testimony. But McGahn did not appear when the committee gaveled into session in May for his hearing, setting the stage for a House vote to go to court to enforce McGahn's subpoena. The subpoena to McGahn is one of a number the committee has issued and been rebuffed by the White House: both former communications director Hope Hicks and former McGahn deputy Annie Donaldson did not answer nearly all of the questions that the committee asked of them related to their time at the White House.

And the Justice Department helped McGahn to ignore the subpoena by issuing an Office of Legal Counsel opinion in May that said he had immunity from being called to testify about his work in the White House.

"Congress may no more summon the President to a congressional committee room than the President may command Members of Congress to appear at the White House," the Justice Department opinion said.

The lawsuit says that the Judiciary Committee spoke to McGahn's counsel and the White House over several months in an attempt to reach a deal for McGahn's testimony, but the Democrats said that process was "at an impasse."

But the aides argued they still needed to hear from McGahn, because he can talk about the offenses laid out in the Mueller report, as well as the President's intent in those episodes.

McGahn, no longer in the administration and now represented by a private attorney, isn't protected from testimony by the same attorney-client confidentiality as other lawyers because his client wasn't President Donald Trump or any one person when he served as White House counsel.

House Democrats filed the lawsuit in federal District Court in DC, and the case was assigned to Chief Judge Beryl Howell, who oversaw the grand jury proceedings in the Mueller investigation and is known for siding with public transparency.

Similar clashes between Congress and the executive branch have ended up in federal court before, though judges are often reluctant to get in the middle of a dispute between the executive and legislature, especially to limit Congress' investigative power. When President George W. Bush's former top counsel, Harriet Miers, and his former chief of staff, Joshua Bolten, did not comply with subpoenas issued by the Judiciary Committee, a judge ruled in 2008 that they couldn't ignore them.