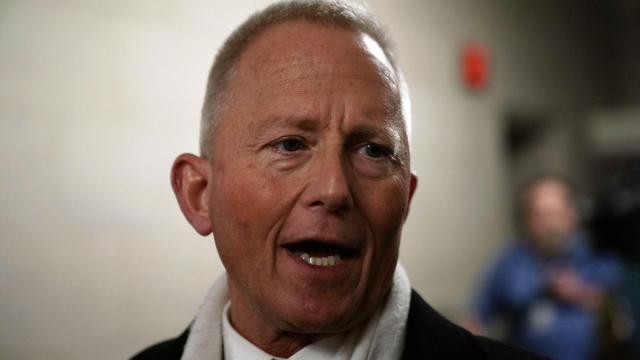 CNN — President Donald Trump announced that Rep. Jeff Van Drew would join the Republican Party, a day after the New Jersey congressman and one other Democrat voted against both articles of impeachment.

Van Drew met with Trump, Vice President Mike Pence and House GOP Leader Kevin McCarthy at the White House on Thursday, but looked to have already made up his mind Wednesday night. He sat with Republicans before the historic vote, receiving handshakes and fist bumps from GOP members. He crossed his arms when House Intelligence Committee Chairman Adam Schiff presented the Democratic case for impeachment. And he gave McCarthy's counter argument a standing ovation.

"I think they were very kind, very gracious, very nice, very supportive," said Van Drew about the Republican welcome on Wednesday night. "And I appreciated that."

Van Drew added that he thought Trump's chances of reelection "are going to be even higher" after the Senate acquits the President.

Democrats are moving quickly to keep the seat. Brigid Harrison, a political science professor at Montclair State University, announced on Monday that she would run and other Democrats are considering campaigns.

Guinn also argued that Van Drew is vulnerable in a Republican primary against businessman David Richter, since he has voted against Trump about 90% of the time. The congressman has a 100% rating from the Planned Parenthood Action Fund and even endorsed New Jersey Sen. Cory Booker for president, who is now raising money for the eventual Democratic challenger. On Thursday, Van Drew pledged his "undying" support to Trump, and the President endorsed him.

"Republicans face a significant challenge holding onto New Jersey's Second Congressional District and Congressman Jefferson Van Drew's party switch does not improve their chances in November," wrote Guinn. "Beyond the vulnerabilities on display in his own internal polling, Van Drew's party switch has further weakened him as a candidate: he enters 2020 despised by Democrats, distrusted by Republicans, and likely viewed poorly by independents who watched him swap identities for political gain."

Rep. Tom Emmer, the National Republican Congressional Committee chairman, touted Van Drew's decision as "further proof" that the Democrats' impeachment of the President would flip the House next year. "This is now a Republican seat and we will fight tooth and nail to ensure it remains a Republican seat," said Emmer.

Van Drew has said that he's well positioned to keep his seat, claiming that about 70% of his district approves of him.

When asked on Wednesday if he had received any nasty comments from his Democratic colleagues, Van Drew said, "I'm sure there may be one or two that wanted to," but disputed that Democrats had turned their backs on him.

"We were walking back toward the elevator and somebody said 'gee, you must be the loneliest person in Washington right now,'" Van Drew said. "The door opened up, two Democratic colleagues came out and gave me a hug."