House budget delays raises till January because of 'availability' of funds 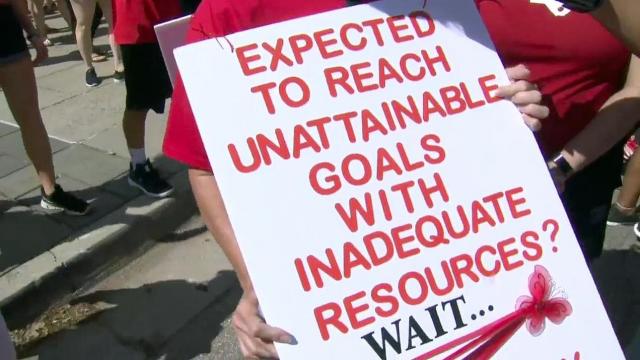 Raleigh, N.C. — Raises for teachers and state workers won't kick in until next year under the House's proposed 2019-20 state budget because the state doesn't have enough money to pay for them just yet.

The House is expected to cast votes Thursday and Friday on its $23.9 billion spending plan.

On Wednesday, the House Appropriations committee slogged through more than 50 amendments to the budget before approving it during a meeting that began at 8:30 a.m. and lasted until 7 p.m. – long after the thousands of teachers rallying on the mall outside the building where the committee was meeting had gone home.

Republican House leaders rolled out highlights of the budget during a Tuesday news conference, but the details of salary spending weren't added to the budget until late Tuesday afternoon.

All raises are set to take effect on Jan. 1 instead of early on in the new fiscal year, which begins in July.

When asked for the reason behind the delay, Rep. Jason Saine, R-Lincoln, a senior chairman of House Appropriations, simply said "availability."

"We want to make sure everything is fiscally balanced," Saine said, without elaborating on possible reasons why the proposed budget doesn't include enough money to pay the raises earlier when previous budgets have and the state has seen budget surpluses in recent years.

The budget includes raises of 1 percent or $500, whichever is greater, for most state workers, although corrections officers and trial court coordinators would see 5 percent increases.

Because these raises wouldn't kick in until halfway through the fiscal year, their year one impact would be half those figures.

GOP leaders said Tuesday that teachers would receive an average pay increase of 4.8 percent in the coming year, but Rep. Jeff Elmore, R-Wilkes, said Wednesday that figure was overstated and the actual average is 4.6 percent. Principals would still see an average 10 percent raise, while assistant principals would get 6.3 percent.

Again the year one impacts will be less, because of the January 1 start date for raises. Kris Nordstrom, who spent 9 years on the General Assembly's fiscal research staff before joining the N.C. Justice Center, puts the House's increase for teachers at 3 percent in the first year of this budget.

A spreadsheet Elmore provided to reporters shows that the raises are back-loaded, going only to teachers who have at least 16 years of experience in the classroom. Teachers with 30 or more years of experience would get a 16.3 percent raise and everyone from 20 to 29 years would get from 5 to 9.6 percent.

Teachers up through year 15 would still see their step increases, which include a $1,000 salary bump, at the beginning of the school year, Elmore said.

Raises in recent years have focused on younger teachers to make a career in the classroom more alluring, but House leaders said Tuesday that they wanted to focus on veteran teachers this year to encourage them to remain on the job and not retire early. Elmore noted difficulties rural school districts have attracting teachers to replace retired educators.

Teacher salaries in the second year of the two-year budget cycle weren't included in the budget document, but lawmakers said during the meeting that teachers would see an average of 6.3 percent over the two years.

"Republican leaders touted these raises when the teachers were in town while deliberately hiding the fact that their raises were only for half a year, Jamal Little, a spokesman for Gov. Roy Cooper, said in a statement Thursday. "Only after the teachers left did they find out the Republicans pulled another fast one on them. Our public schools deserve better."

Cooper called for raises of 9.1 percent over two years for teachers.

The North Carolina Association of Educators, which sponsored Wednesday's rally, called the House budget proposal "completely inadequate" from the perspective of students and teachers.

"Not only does this budget fail to raise the minimum wage of our lowest-paid educators, but the proposed pay scales are nothing more than a shell game designed for political expediency at the expense of solving actual educational needs, necessitated by the continued tax cuts on businesses and wealthy individuals," NCAE President Mark Jewell said in a statement.

Other budget items that came out in the House Appropriations debate:

Many of the amendments that passed were technical in nature, such as changing the name of a detention facility or moving money from one pot to another, but some proposals were contentious.

Rep. Rosa Gill, D-Wake, tried to delete language in the budget that would essentially prohibit school districts from closing for events such as Wednesday's teacher rally and would limit teachers' ability to take a personal day to attend such an event.

"Systems work months to develop their calendars, and parents plan around it," Elmore said in opposing Gill's amendment, which was defeated in a 37-44 vote.

Rep. Holly Grange, R-New Hanover, proposed setting aside $300,000 for a study on whether North Carolina could take advantage of the growing need for offshore wind turbines and build a new manufacturing industry.

Rep. George Cleveland, R-Onslow, said turbines pose a threat to military training, so North Carolina shouldn't have anything to do with them. But the amendment passed overwhelmingly.

The committee also took the unusual step of using flash cards – green for yes and white for no – to count votes instead of counting hands.

During one such count of yes votes on an amendment, someone shouted to Cleveland, an ardent opponent of illegal immigration, "Hey, George, look at all these green cards."

Even Cleveland laughed hard at the remark.

May 28, 2019 clarification: This story has been edited to better describe the percentage raises called for in the House budget.