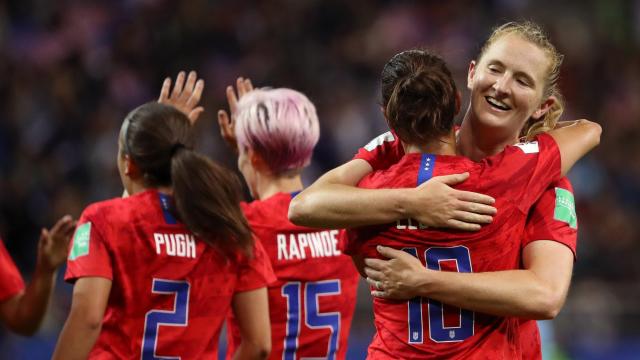 CNN — Two Democratic congresswomen on Tuesday introduced a bill that would block federal funding for the 2026 men's World Cup until the US Women's National Team earns "fair and equitable wages compared to the US men's team."

The legislation, co-sponsored by Reps. Doris Matsui of California and Rosa DeLauro of Connecticut, comes amid the team's longstanding battle for equal pay.

Months before the tournament, members of the Women's National team filed a lawsuit against the US Soccer Federation, claiming they deserve to be paid what the American men are paid for their international performances. In one hypothetical case cited in the lawsuit, if the women's and men's teams both won 20 straight games in a season, the women would make 38% what the men do.

Matsui and DeLauro say the federal government shouldn't make any financial contribution for the 2026 tournament, which will be spread through venues across the US, Canada and Mexico, until the playing field is level for female athletes.

"Until the USSF provides real reforms ensuring equitable pay for our male and female athletes, the U.S. government has no business contributing potentially billions of dollars in support for the 2026 World Cup," Matsui said in a statement.

DeLauro said federal funding for the men's tournament in 2026 would be "encouraging the pay gap to continue."

"Congress needs to ensure women in the same job are getting the same pay," DeLauro said in a statement.

Two weeks ago, Democratic Sen. Joe Manchin introduced a Senate version of the bill, which would similarly block federal funding until US Soccer agrees to "provide equitable pay."

Still, it's unclear just how much money would actually be withheld if the bills succeed in Congress.