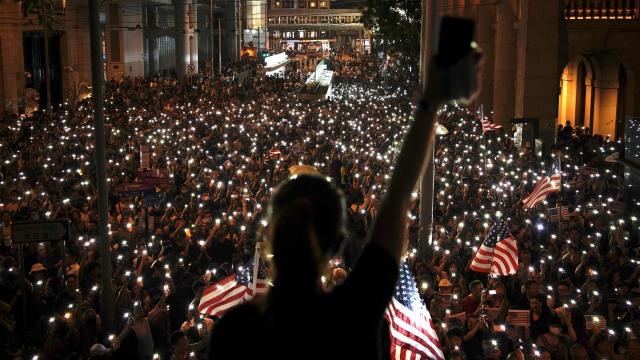 CNN — The House of Representatives sent a clear rebuke to Beijing and reaffirmed American support for pro-democracy activists in Hong Kong on Tuesday afternoon, as police have intensified crackdowns on protesters in the semiautonomous region in recent weeks.

Lawmakers approved the Hong Kong Human Rights and Democracy Act after demonstrators in the city of 7 million took to the streets earlier this week to urge the US Congress to approve the measure. The bill, which was seen as an uncontroversial measure because of its broad bipartisan support, passed by voice vote because a recorded vote was not requested.

The bill would mandate an annual review to determine whether Hong Kong's autonomy from the mainland Chinese government remains sufficient to justify the special treatment the financial hub receives under US law.

It would also lay out a process for the President to impose sanctions and travel restrictions on those who are found to be knowingly responsible for threatened or carried out arbitrary detention, torture, forced confession of any individual in Hong Kong, contraventions of the Sino-British Joint Declaration and Hong Kong's autonomy, or other violations of internationally recognized human rights in Hong Kong.

The Senate version of the legislation is still awaiting a floor vote. The Senate bill differs slightly from the House measure -- a Senate aide involved in the process said the chamber is likely to pass its own version, meaning the House may have to take up the issue again later on, after the Senate holds its vote.

House members on Tuesday afternoon also passed by voice vote two other Hong Kong-related measures: a resolution supportive of the protesters and the PROTECT Hong Kong Act. The latter would halt US exports of nonlethal crowd control equipment, such as rubber bullets and tear gas, to the Hong Kong police until an independent investigation into human rights concerns is completed, those concerns are adequately addressed by the Hong Kong government and the White House determines that Hong Kong law enforcement has not engaged in human rights violations for a year.

Even as President Donald Trump has remained largely silent on the Hong Kong protests amid trade talks with the Chinese government, members of Congress from both parties -- widely in agreement on the question of the Chinese Communist Party's human rights abuses and oppression of its citizens -- have sided with the protesters.

The protests have gripped Hong Kong for months. They began in early June, when more than a million people marched against a bill that would have allowed individuals in Hong Kong to be extradited to mainland China for trial. The city's unelected leader, Carrie Lam, has since scrapped the bill. But the movement has remained strong, in an effort to secure democratic reforms in Hong Kong, as well as an independent inquiry into allegations of police misconduct.

Interactions between protesters and police have become more violent in recent weeks — at the beginning of October, a police officer shot an 18-year-old protester in the chest with a live round during an exceptionally chaotic day.

Arrests have also ramped up. Last week, Hong Kong Chief Secretary Matthew Cheung said that more than 2,300 people have been arrested during the protests, 750 of whom are under 18.