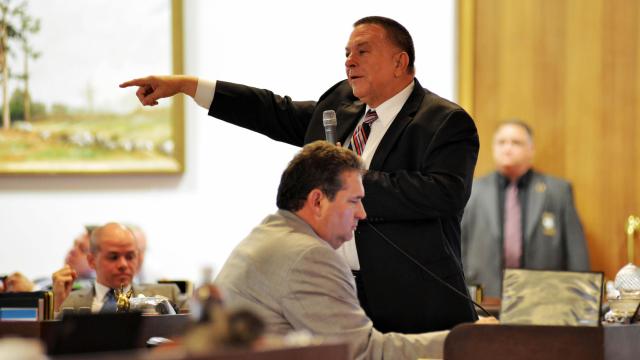 Raleigh, N.C. — After about nine hours of debate, members of the state House gave final approve to a $22.1 billion state budget plan shortly after 1 a.m. Friday.

The two required approvals on the budget occurred less than 75 minutes apart on either side of midnight, and the proposal now heads to the state Senate, which is developing its own, markedly different, spending plan.

"I implore every member of this House to vote for this budget because it provides for the needs of our people," Rep. Nelson Dollar, R-Wake, said just before midnight Thursday, when House leadership rushed to get its first vote recorded.

Members were struggling to both pass the bill before the end of the week and meet constitutional requirements on how bills that raise money are handled – two votes are required on separate days.

"Don’t sacrifice the good for the perfect. It’s not perfect," said Rep. Craig Horn, R-Union, before the final vote. "Am I ecstatic? No, but I’m sure proud."

In the end, the measure easily cleared its initial hurdle on a bipartisan 94-23 vote, with only 12 Democrats and 11 Republicans opposed. The final tally early Friday was 93-23.

Still, there were some objections.

"I cannot vote at this junction for this budget because, in my book, it is fiscally irresponsible," said Rep. Mickey Michaux, D-Durham, saying the document relied on projections that may or may not pan out.

After days of committee hearings that have made changes large and small to the budget, House members were not done pushing and pulling on the spending plan, devoting more than eight hours to debate dozens of proposed amendments.

Although 62 amendments were filed, House Speaker Tim Moore ruled more than a dozen out of order, effectively killing them, and he pushed another seven to Friday's debate so lawmakers could squeeze a vote in before midnight.

In the end, 42 amendments passed. Some amendments cruised by with little notice, while others sparked fierce debate. Here are some of the more notable amendment fights that highlighted key sections of the budget.

The state House budget would raise fees for most Division of Motor Vehicles services, such as renewing drivers licenses and registrations, by 30 percent. Some of those added fees would be offset by lower gas taxes.

"I offer you this choice tonight so you won't have to go back to your constituents and explain why you raised a whole bunch of fees," Rep Dana Bumgardner, R-Gaston, said of an amendment he offered to kill those fee hikes.

The measure drew fire from budget chairmen as well as other House members, such as Rep. Susan Martin, R-Wilson, who said the fee increases help fund improvements to the state ports.

Others sided with Bumgardner, including Rep. Bryan Holloway, R-Stokes, who pointed out that the state had announced a $400 million budget surplus earlier in the month.

A fee increase in the face of a surplus, Holloway said, "is just a hard, hard thing for folks to accept."

However, the chamber turned back the amendment and kept the fee increases on a vote of 41-73.

Rep. Bobbie Richardson, D-Franklin, successfully killed a budget provision that would have shuttered a Department of Revenue call center in Rocky Mount.

"I urge you not to take 70 jobs out of Rocky Mount," Richardson said, noting that the area was one of the most economically distressed in the state.

"We do not have the tools in the toolbox that other areas had," she said, explaining that the loss of those jobs would be harder to cope with than if jobs were eliminated elsewhere.

Rep. George Cleveland, R-Onslow, opposed the amendment, saying the decision to close the Rocky Mount center came at the request of the Department of Revenue. But Richardson's measure passed by a narrow 59-57 margin, apparently winning votes with the argument that a shutdown of the call center wouldn't save that much money.

Lawmakers have been studying different ways to fight food deserts – rural and urban areas where it's hard to get nutritious food such as fruits and vegetables. One idea is to create a grant program that helps corner stores – what some might call convenience stores or quickie marts – buy refrigerators and other equipment to display the produce.

Holley picked up support from Republicans such as Rep. Brian Brown of Pitt County, who said a pilot program in the Greenville area was helping residents there eat healthier.

But others blasted the notion. Rep. Michael Speciale, R-Craven, said he doesn't like the looks of the fruit when he walks into a corner store.

"I wouldn't eat those fruits if they gave them to me," Speciale said.

A bigger objection, he said, was that the state government shouldn't try to create a market for fruits and vegetables.

"Nobody goes to the corner store to buy fruits and vegetables," he said. "They're going there to buy honey buns and Cokes."

"The facts do not support solar as a viable, long-term source," Avila said.

The amendment opened a rift in the Republican caucus that has been on display over the past few week between backers of the renewables industry and those, like Avila, who believe that the state shouldn't be in the business of subsidizing the industry.

Rep. Jimmy Dixon, R-Duplin, said that he has opposed solar in the past but said he opposed Avila's amendment because lawmakers had made a deal to allow the credits to be phased out two years from now.

That prompted Rep. Chris Millis, R-Pender, to challenge Dixon, saying that negotiators really only agreed to make sure some solar projects could continue to get funding. Millis asked if Dixon was misinformed.

"There are many things on which I'm misinformed. This is not one of them," Dixon replied.

As drafted, the state budget sets aside $1 million to help develop new privately run but publicly funded charter schools throughout the state. That money would go toward the private nonprofit Parents for Educational Freedom in North Carolina and could be spent only on schools in counties where there is one or no existing charter.

The measure, said Rep. Paul "Skip" Stam, R-Wake, would address criticism that more charters, and therefore more educational options, were available in areas with big cities, such as Wake and Mecklenburg counties.

But Rep. Rosa Gill, D-Wake, said the state should not be giving money to a private nonprofit to make grants on behalf of the state. If the state is going to give grants, she said, the Department of Public Instruction should give them.

In an effort to redirect the funds, Gill tried to shift the money to teaching assistants, drawing support from Democrats and a few Republicans.

"This is taxpayer money over which we ought to have oversight and accountability," Rep. Rick Glazier, D-Cumberland, said.

"PEFNC doesn't get any of the money for its own overhead," Stam argued.

Members of the House battled over whether North Carolina should get into the venture capital game.

A provision in the budget as it came to the floor would take $40 million from the escheats fund to invest in startup businesses. Escheats are funds that the state is holding in trust for people who unintentionally abandoned tax refunds or business payments. The escheats money would help attract private investment, according to Rep. Nelson Dollar, R-Wake.

"The state of North Carolina needs more venture capital," Dollar said, noting that the lack of investment dollars is thwarting efforts to start new businesses. "It's a real problem for job development."

But Stam said the state should not be using other people's money to invest in businesses with little to no track record.

Backers of the investment provision said that the state could earn better returns for the escheats fund by making the investments. Those returns go to help needy students.

Rep. Leo Daughtry, R-Johnston, said that Stam's line of logic showed him to be "one of the greatest thinkers of the 20th century. But we are in the 21st century."

The new fund would be overseen by political appointees put in place by the governor and legislature, which Rep. John Blust, R-Guilford, said invited ethical conflicts.

"Those with political connections are going to get the capital," Blust said. "It's just an invitation to crony capitalism."