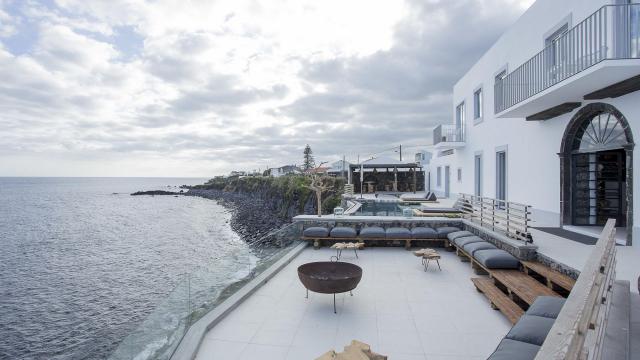 The Portuguese archipelago of the Azores has been getting more buzz and direct flights lately, but hotel offerings have tended to be on the old-fashioned side. The sleek, minimalist White Hotel, which opened in July 2017 on the main island of São Miguel, is a notable exception. Its whitewashed public spaces and its 10 design-centric rooms offer little in the way of color to distract from the ultra-blue ocean, vibrant greenery and volcano-formed caldera lakes of the North Atlantic islands. Though other popular sights on São Miguel, like Furnas and Sete Cidades, tend to be cool, misty and wooded, the White capitalizes on its sweeping waterside views and starkly contrasting design to evoke more tropical Mediterranean isles.

Set in a 17th-century volcanic rock manor house once used for winemaking, the White’s lobby and terrace opens to dramatic views of the Atlantic Ocean. Fishermen cast out from the rocks, and swells roll out from the scalloped mini-bay the hotel is set within. The White is about 20 minutes from Ponta Delgada’s city center and five minutes from the neighborhood beach.

A large-scale custom macramé work by Lisbon artist Diana Meneses Cunha — rope shot through with twigs and blue cotton accents — was suspended from the ceiling, dividing the seating and bed areas of our ocean-view suite. The bed featured linens of soft Portuguese cotton, although we very much missed a flat sheet. A gray sleeper sofa sat under a mirror with a big distressed-wood frame. What looked like a closet opened up into a full kitchenette, complete with baking dishes. A small balcony overlooking the terrace and ocean below held a simple white bistro table and two chairs. Only a TV mounted awkwardly on a corner of the wall broke the careful minimalism of the décor.

The bathroom, painted gray for a weathered-exterior look, was huge and high-ceilinged, although its fluorescent lighting was less than flattering. A small step stool and a rustic wooden ladder, which proved useful for hanging clothes and drying swimsuits, were the bathroom’s only furnishings. The sink, a dark-wood bowl, stood out as an interesting design touch.

Although the hotel’s official check-in time was 2 p.m., the staff made our room available at 8 a.m., when my husband and I arrived from our red-eye flight, so we could restore ourselves immediately with a nap. The room had no phone, but a Samsung tablet was provided both for using the free Wi-Fi and, if needed, contacting the front desk. The minibar featured No Fork brand pretzels, cashews, peanuts, gummy candies, chocolate crinkles and butterfly puff cookies (2.60 to 3.60 euros). Drinks on offer were local Laranjada Melo Abreu and Kima passion fruit soda, along with Fever Tree soda water and Coke (all 2.50 euros). Morning beverages were available for, surprisingly, an extra charge: Gorreana teas from one of the island’s own tea plantations for 1 euro, along with Nespresso coffee pods for 2 euros.

Exposed black volcanic basalt rock is to the Azores, what exposed brick is to many other cities, and the intimate 14-seat restaurant Cardume dramatized itself with a full wall of it. Dinner featured typical Azorean flavors in elevated dishes — fish confit with passion fruit sauce (26 euros), slow-cooked pork shoulder with caramelized local pumpkin and sweet potato (32 euros), and a sweet potato brownie with lime ice cream (12 euros). I indulged in a tall, thick glass of passion fruit juice, while my husband had a gin and tonic made extra-spicy with local Azor gin. The complimentary breakfast the next morning included yogurt with granola, fruit and six other small jars of toppings like a seed mix; local cheese and meat; Portuguese biscuits; scrambled eggs; banana pancakes and fresh mango juice.

With a stark-white color scheme and a multi-textured, inviting design that combine to show off its oceanic setting, the White blends a beachy Mediterranean look with a cool, distinctive North Atlantic feel.