Covid-19 hospitalizations drop, but January has been the deadliest month of the pandemic. Here's what to expect next 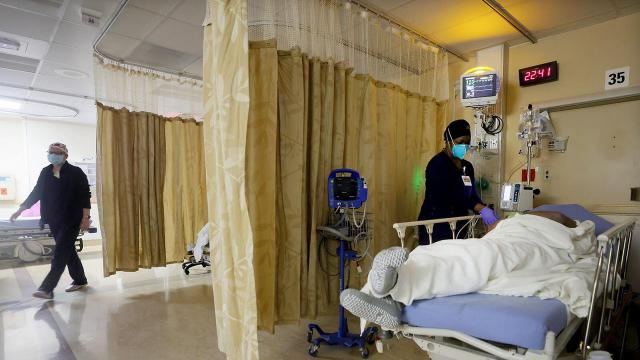 CNN — For the first time in almost two months, less than 100,000 Americans are hospitalized for Covid-19.

About 97,000 patients were hospitalized Saturday, according to data from the COVID Tracking Project. The last time the number was below 100,000 was December 1.

Yet the seven-day average of new cases is still about the same as it was December 1. Even worse, the average number of daily deaths is more than double what it was then.

January has been by far the deadliest month of the pandemic. More than 93,581 people have died from Covid-19 so far this month, surpassing December's total of 77,486 deaths, according to Johns Hopkins University.

"Right now it's the worst of possible worlds. It's the winter. It's getting cold out, people are together more, there's still a critical number of people in the United States who don't wear masks, who don't social distance," said Dr. Paul Offit, a member of the FDA's vaccine advisory committee.

He's not alone. About 120,000 more Americans could die from Covid-19 over the next two months, according to the University of Washington's Institute for Health Metrics and Evaluation.

So health experts are urging all Americans to double down on wearing masks and keeping your distance from others.

And while vaccine makers and officials scramble to get more Americans vaccinated, they're racing against the spread of highly contagious strains of coronavirus that are now in the US.

These worrisome strains are in multiple states

The B.1.351 strain, first identified in South Africa:

This strain has worried scientists because it has a mutation that might make current Covid-19 vaccines somewhat less effective.

Maryland became the second state to report a case of this Covid-19 variant. That person had not recently traveled internationally, the governor's office said.

On Thursday, South Carolina reported two cases of B.1.351. Those two people had no known travel history or connection to one another, state health officials said.

Although current vaccines are believed to be protective against known variants, some research has suggested they may be less effective against the B.1.351 strain in particular.

"The good news is the vaccines as they exist now still would be effective against the mutants," Fauci said. "The sobering news...as you get more and more replication, you can get more and more of evolution of mutants, which means you always got to be a step ahead of it."

Scientists in the United Kingdom say this variant might be up to 70% more transmissible than others.

Now the B.1.1.7 strain has been found in at least 30 US states, according to the Centers for Disease Control and Prevention.

This spring and summer, Southern California and Southern Florida will be most at risk for the B.1.1.7 strain, said Dr. Scott Gottlieb, former commissioner of the FDA.

"If you look at where B.1.1.7 is right now in the country, about half the cases that we're turning over are in Southern California and in Florida," Gottlieb told CBS's "Face The Nation" on Sunday. "And the cities are the hotspots, San Diego and Miami."

More help is on the way, even though it will take at least several more months to get most Americans vaccinated.

While the current Moderna and Pfizer/BioNTech vaccines each require two doses, a new single-dose vaccine from Johnson & Johnson might get emergency use authorization by late February.

More than 29.5 million Moderna or Pfizer/BioNTech doses have been administered nationwide, according to CDC data. About 5.2 million Americans have received both doses of their vaccine.

Some states are using mass vaccination sites to get as many shots into arms as quickly as possible.

In Washington state, health officials said more than 10,000 people had been vaccinated at such sites with the help of the state's National Guard and other partners.

"The goal of mass vaccination sites is to increase access to vaccine across the state, ensure our plans are equitable, and protect those most at risk," a statement from Washington state's health department said.

An argument for delaying second doses

As many people as possible over age 65 need to be given their first dose Covid-19 vaccine, essentially delaying some second shots of the vaccine, said Michael Osterholm, director of the Center for Infectious Disease Research and Policy at the University of Minnesota.

Osterholm told NBC's "Meet the Press" Sunday that the change in vaccine distribution is needed to respond to a possible viral surge in the next six to 14 weeks caused by the B.1.1.7 strain first identified in the UK.

"We still want to get two doses in everyone, but I think right now in advance of this surge, we need to get as many one doses in as many people over 65 as we possibly can to reduce the serious illness and deaths that are going to occur over the weeks ahead," Osterholm said.

"We do know that if we get a number of first doses in people, particularly 65 years of age and older, we can really do a lot to reduce the number of serious illnesses and deaths in this next big surge which is coming," he said.

Even though that might delay some people's second doses, "We're not going to deny anybody their second dose," Osterholm said.

But the CDC said Americans shouldn't worry too much if the gap between their two doses is a bit longer than recommended.

A new order by the CDC requiring people to wear masks while riding any kind of public transportation will go into effect Monday night.

The agency said public transportation operators must use best efforts to enforce the mandate, such as allowing only those wearing masks to board and disembarking passengers who refuse to comply.

Dr. Martin Cetron, director of the CDC's Division of Global Migration and Quarantine, signed the order.

People can take their masks off briefly to eat, drink or take medication; verify their identity to law enforcement or transportation officials; communicate with hearing impaired people; don an oxygen mask on an aircraft; or during a medical emergency, the CDC said.

Children under age 2 or people with a disability who cannot wear a mask are exempt.

In Washington, DC, the Washington Metropolitan Area Transit Authority told CNN "face coverings have been required on Metro since May."

"We welcome any policy that further promotes compliance on Metro and in all public spaces to combat the spread of the virus, and welcome the ability of TSA and other federal authorities to enforce this mandate when appropriate," a spokesperson said.

In California, a Bay Area Rapid Transit spokesperson said the Bay Area's public transportation system has had a face covering mandate in place since April.

The CDC order applies to all travelers, including those who have had coronavirus or the Covid-19 vaccine.

The order will stay in effect until further notice.

Why you might still give or get coronavirus after getting vaccinated