Horse Troughs, Hot Tubs and Hashtags: Baptism Is Getting Wild 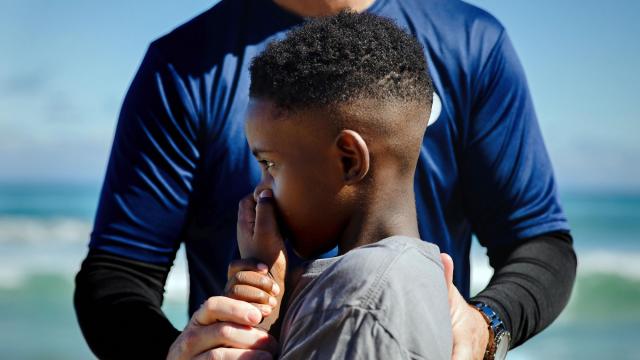 Russell Moore’s baptism in 1983 was a decorous occasion, or at least as decorous as possible when the main event consists of being plunged underwater in front of one’s entire church. The ceremony took place in a formal baptistery inside his family’s Mississippi church, with a painting of the Jordan River — where Jesus was baptized by John the Baptist — behind the tank. An organ played softly in the background. Moore wore a long white robe.

But a few weeks ago, when it came time to baptize Moore’s 14-year-old son, Jonah, the scene was very different. Jonah wore a T-shirt. Moore wore sneakers. A full rock band, including drums and an electric guitar, accompanied. And Moore, who is the public theologian at Christianity Today magazine, submerged his son in a galvanized steel livestock trough hauled onstage at the church just for the occasion.

Baptism is getting a little bit wild.

In South Florida, members of Family Church gather on the beach for afternoon baptisms in the ocean, bracing themselves against the waves and keeping an eye out for sharks. At Walk Church in Las Vegas, leaders set up a folding tub in the courtyard of the middle school that they use for Sunday services. In Mansfield, Texas, Creekwood Church rents out the Hawaiian Falls Waterpark, where twisting slides tower over the ceremony.

“I would have probably thought a decade ago that not having a traditional baptistery would feel disconnected from my tradition,” Moore reflected a few days after his son’s ceremony, which took place at Immanuel Nashville, where he serves as minister in residence. “But I’ve found it to be the opposite.”

Performing the age-old Christian ritual in a more informal style “conveys this isn’t your grandmother’s church,” said Drake Osborn, pastor of teaching and liturgy at Grace Church in Waco, Texas. His congregation moved into a former bowling alley in 2016 but never considered installing a built-in baptistery. Instead, Grace Church uses a foam model bought online for about $2,500.

The shift has taken place as many pre-21st-century symbols of church life have fallen out of fashion in evangelical culture, especially among churches that are expanding or building new facilities. Sanctuaries are now “worship centers,” and steeples and stained glass are out. Natural light is often eschewed in favor of a black-box theater aesthetic optimized for flashy audiovisual experiences and online streaming.

It’s not just the architecture that is changing. Contemporary evangelical baptisms are often raucous affairs. Instead of subdued hymns and murmurs, think roaring modern worship music, fist pumps, tears and boisterous cheering. There are photographers, selfie stations and hashtags for social media. One church in Texas calls its regular mass baptism event a “plunge party.”

Scarce, too, are the traditional white robes. Instead, many churches hand out custom T-shirts for the occasion, with slogans like “#washed,” “Best day ever,” “No turning back” and “Meet the new me.” The fabric is typically a dark color for the sake of modesty when wet.

“We live in an age where people like experiences,” said Mark Clifton, pastor of Linwood Baptist in Kansas, which closed up its built-in baptistery last year and now uses an inflatable hot tub. “It’s not that it looks better, but it feels better. It feels more authentic, it feels more real.”

The hot tub, Clifton said, is also easier to fill, requires almost no storage and lets people gather around to view baptisms up close. “It’s not the container that matters,” he added. “It’s what is going on in the person’s heart.”

Baptism is a core Christian tradition dating back to the earliest days of the church. Depending on one’s theology, the ritual is a component of salvation or a symbol of it.

Facilities tend to flow from theology. In traditions like Catholicism that baptize infants by sprinkling or pouring water on their heads, the equipment required is minimal, although it can be ornate: a bowl on a stand and perhaps a small pitcher. But many of those who practice “credo-baptism,” or the voluntary baptism of believers as an outward expression of faith, require the person — usually a teenager or an adult — to be fully immersed in the water. For the congregations in that category, including Baptists and charismatics, that means plumbing, heating equipment, maintenance costs and potentially hundreds of gallons of water for each event. In the United States, indoor baptisteries — along with steeples and ornate architecture — were initially a mark of class. Baptisms in lakes and rivers were commonplace when those were the only practical options. But they were also messy, rustic and subject to the whims of weather. In the 19th century, some urban churches without running water painstakingly carried water into the church to set themselves apart from rural churches. The indoor facilities became prevalent in the early 20th century, when technology and the growing respectability of adult baptism made it feasible for more churches to install them.

The typical baptistery is behind and above the pulpit, with stairs on the side leading off to a hidden dressing room. Pastors often put on hip waders to enter the tub with the person to be baptized, who stands in the water until the moment in the ceremony in which that person is dipped briefly but dramatically backward into the pool.

As those 20th-century churches have aged, however, their once-modern baptisteries have come to look old-fashioned, too.

“It’s like eating organic food,” said Chad Seales, a professor of religious studies at the University of Texas at Austin who has written about the history of indoor baptisteries. The middle and upper classes now embrace the “primitive” as a mark of authenticity.

The change is not just a matter of style. Built-in baptisteries are bothersome. Mold and leaks are a constant problem, and because the tanks are larger than most portable options, they take longer to fill and heat. “Maintaining baptisteries is very expensive,” said Evan Welcher, until recently the pastor at Vine Street Bible Church, in Glenwood, Iowa, which operates two large 19th-century church buildings on the same block. (It’s a long story.)

These days, Welcher eyes newer, ostensibly hipper baptism facilities with something like envy.

“We have two baptisteries, and at different times they both leaked,” he said. “The cattle trough looks really easy; it looks so much better. People might say ‘Oh, the cool churches do it,’ but it actually looks like a better way.” Vine Street, which has baptized four people this year, spent around $3,000 to fix a broken heating pump in one of its facilities a few years ago. Those “cooler churches” are often “church plants,” or new congregations established by an existing church or denomination with the goal of evangelizing in a new location. They typically begin by meeting in rented facilities like schools, movie theaters or storefronts, and they are attuned to events and aesthetics that will attract crowds.

Historically Black churches have generally maintained a more formal tradition, said David Latimore, director of the Betsey Stockton Center for Black Church Studies at Princeton Theological Seminary. The Black church “has always resisted the pull of informality for informality’s sake,” Latimore said. Since baptism is a ritual of belonging and “citizenship,” it had a kind of double meaning for much of American history. “There’s a great and heavy sense of the profound sacredness of this ritual,” he said.

No matter the level of spiritual solemnity, baptism offers a moment of spectacle, a perk especially for religious traditions like evangelicalism, whose architecture is often utilitarian, and which otherwise emphasize invisible shifts in personal belief as the site of greatest drama. Pop star Justin Bieber posted photos to Instagram last year of his baptism outdoors with his wife. It was “one of most special moments of my life,” he wrote. (He had previously been baptized in an NBA star’s oversize bathtub; repeat baptisms are controversial in some circles but not unheard of.) Other celebrities, including Demi Lovato, Mario Lopez and Christian hip-hop artist Lecrae, have been baptized in recent years in the Jordan River in the West Bank.

Adriana Robles, 21, was baptized a few weeks ago in a trough at Momentum Las Cruces, a nondenominational church in New Mexico. She had been baptized as a toddler in a Catholic church, she said, but it was important for her to participate as an adult as a demonstration of her commitment to her faith. She was nervous beforehand, she said, and the water was cold. But coming out of the water to the roars of music and cheers, “I felt like God was with me in that moment.” But it doesn’t take a hip setting to make baptism a boisterous occasion. On a recent Tuesday night at First Denton, a large Baptist church north of Dallas, more than 200 college students and a few family members gathered for a Baptism Night held by the church’s college group, Overflow. Last fall, the event was postponed because of a leak in the baptistery — discovered when water began dripping down the walls in the hallway below — but on this night it was in shipshape condition.

“We see baptism as a celebration,” Jared Gregory, the college pastor, told the congregation. “Things are going to get a little rowdy.”

About a dozen students had signed up in advance for the ritual, and others felt moved to volunteer on the spot. The men changed clothes in a dressing room on one side of the baptistery; women on the other. One by one, they stepped down into the warm water, where Gregory was waiting for them. He plunged them backward, declaring them raised by Christ. One by one, they burst out beaming, sometimes with tears streaming down their faces. And each time, the crowd went wild. This article originally appeared in The New York Times.