Horror, Horror, Read All About It 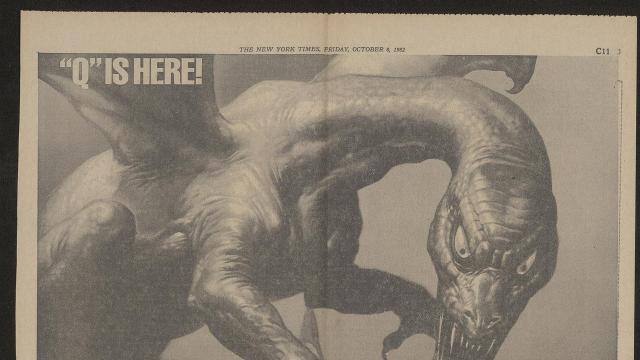 For scary-movie lovers, the 1980s were a golden decade. The horror scene exploded so much after the original “Halloween” (1978) proved so popular that titles like “The Dorm That Dripped Blood,” “The Mutilator” and “Deadtime Stories” were being advertised in the mainstream pages of The New York Times, The Daily News and The New York Post.

With creepy, meticulously designed illustrations that threw subtlety out the window, and text that made outrageous claims far beyond the movie’s actual contents, these ads could make a minor piece of schlock look like the most elaborate exercise in terror. They caught the imagination of one horror fan, Michael Gingold, who began clipping promotions for “My Bloody Valentine” and the like, from his family’s subscriptions as a junior high student in 1979. He collected them as a way to both celebrate and keep track of movement in the genre. He would continue to do so throughout the ‘80s.

“I was a die-hard collector,” Gingold said in a phone interview. “I wrote a list of every ad that I had in the order that I assembled them. I started building this chronological history of the horror films that opened, by the advertisements.”

Now Gingold, a former editor-in-chief of the horror fan magazine Fangoria and now a writer there, has gathered his clippings in a book: “Ad Nauseam: Newsprint Nightmares From the 1980s.” Here is a closer look at three highlights from the collection, with Gingold explaining how they fit into that decade’s cinema landscape.

This macabre ad touted Charles Kaufman’s low-budget film about a mentally unstable matriarch and her twisted sons who capture and terrorize three campers. The image of a skeletal mother with a gift box containing a severed head received the full-page treatment. Gingold said that for many horror films, there would be two ads, a more explicit one for The Post and The Daily News, then a muted version in The Times. This one was an exception.

“Mother’s Day” was released by the United Film Distribution Co., which had success with “Dawn of the Dead” and spent heartily on print ads.

“If this film would have been picked up by most anyone else, it would not have gotten that kind of advertising spread,” Gingold said.

Gingold’s grandparents often took him to horror movies growing up, but the promotion for “Mother’s Day” was so brutal, he said, that his request to see it was vetoed. “My parents took one look at that ad and said, ‘There’s no way you’re going to see that,'” he recalled.

The poster ad for this monster movie, from the renegade low-budget maestro Larry Cohen, was the conclusion of a campaign that began with ads all around New York City announcing, “Q is coming.”

“I think they figured it was a nice concise teaser they could put out,” Gingold said.

When the movie finally opened, the poster led with the line “Q is here!”

The film, also released by United Film Distribution, played in some 100 New York-area theaters, and, like “Mother’s Day,” was the subject of a full-page ad in The Times.

“Q” was short for both the main monster Quetzalcoatl, as well as the hero, Jimmy Quinn, played by Michael Moriarty.

The poster design, which has Q in her home base atop the Chrysler Building (since the Empire State Building was already taken), was more beautiful than what the film itself would be able to achieve.

Gingold said this ad design, as well as many others in his book, was more detailed than it would be today, when “you have to have a poster that looks good as a thumbnail on a VOD screen,” he said. That’s where much of the genre has now been relegated.

Sometimes bluntness was the best way to sell a movie. There was little mystery in what you’d be getting with “Pieces,” which was promoted with bold letters declaring, “It’s exactly what you think it is!”

The ad for this slasher movie includes a shimmering chain saw, a corpse, a warning that “absolutely no one” under 17 would be admitted and the convenient statement that you don’t have to go to Texas for a chain saw massacre. You didn’t even have to go to Manhattan. The number of “flagship” theaters listed in the ad rivals the amount that the biggest blockbusters would have screened in. That list is a time-capsule tribute to many of the region’s former movie houses.

Gingold saw “Pieces” in the Westchester County suburbs, where he grew up.

“It was great because it meant I didn’t have to brave the horrors of 42nd street to see movies like this,” he said.

The White Plains UA Cinema, one of the better theaters in the county, “would usually play stuff like ‘Return of the Jedi’ and ‘E.T.,’ but I also saw ‘Pieces’ there.”