Raleigh, N.C. — In a world filled with the likes of Lollapalooza, Coachella and Bonnaroo, an underground music festival right here in Raleigh has made a name for itself.

Hopscotch Music Fest, the centerpiece of downtown Raleigh's M.A.I.N. event series next month, has been hailed by The New York Times for its "incredibly diverse lineup."

"It's curated very smartly, catering to both the weirdos as well as the 'normies.' Hopscotch rewards people with eclectic and independent tastes," said music critic Gary Suarez, who covered the show last year.

In its fifth year, the festival has grown to include three nights of national headliners - De La Soul, Spoon and Mastadon - at City Plaza, but maintained its North Carolina roots. In addition to having a North Carolina band open for each headliner (a Hopscotch tradition), the festival's club lineup also contains a mix of local, national and international bands. About 35-40 percent of the lineup each year hails from the Tar Heel State.

While some festivals, like South By Southwest, have taken on a more corporate tone, Hopscotch has remained a small effort by a group of passionate staff - many of whom have day jobs in addition to their Hopscotch duties.

How it all began

Founder Greg Lowenhagen came up with the idea for the festival in 2009 while working at the Independent Weekly. The UNC grad was inspired to start a local festival after living in Austin and Chicago - cities already hosting music festivals. Lowenhagen pitched it to the paper's founder and then-owner Steve Schewel, and asked its music editor, Grayson Currin, to help plan it.

"We had no idea if it would work. It was just sort of an idea that happened," former Hopscotch co-director Grayson Currin said. "I don't think either of us had any idea. We certainly wished it would grow and become a big thing. We didn't know if people would respond at all." 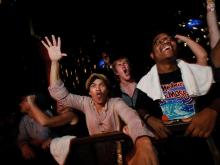 With a mix of club shows and day parties, Hopscotch has become a go-to event for music fans seeking up-and-coming talent in a variety of genres. It's use of a variety of venues has also helped set it apart from other festivals.

"Fests like Coachella, Electric Zoo, Lollapalooza, and Pitchfork essentially pen concertgoers in, effectively limiting their experience within strictly defined points. You eat and drink from approved vendors. The bands you see are forced on you at a single-stage fest, or you play roulette between a handful of side stages. Some are worse about that than others, of course. I came to Hopscotch last year having never been to Raleigh before, and I loved the multi-venue set-up. It allowed me to explore the city in ways I'd otherwise have been unable or dissuaded from doing at another fest," Suarez said.

The next year they upped the ante with three additional venues and headliners including The Flaming Lips, who created one of the most memorable Hopscotch moments - lead singer Wayne Coyne bouncing across the crowd in a giant clear bubble. While the band routinely did this on tour, seeing it happen live in City Plaza helped propel Hopscotch to an entirely new level.

"That's when we realized, 'Wow, this thing is really something. People love this,'" Schewel said.

That next year, Hopscotch had 15 venues hosting 175 bands, including The Roots, who performed a few hours late after a batch of severe weather swept through the area.

Currin remembers holding a tarp over The Roots keyboard and sound equipment during the storm. "I didn't die. I was kinda worried for a moment," he said.

That same year, the sound system went out at Slim's, leaving Currin and other Hopscotch team members scrambling for a sound board. They eventually got one from the Raleigh City Museum and had to drag it down Fayetteville Street. For Currin, the moment defined what Hopscotch is all about.

"Hopscotch has grown, but remains this really, scrappy thing," he said. 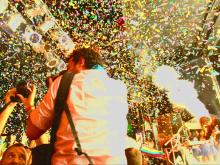 "Hopscotch has struggled financially from day one," Schewel said, noting that the festival has definitely had several years where it's lost more money than it's made. "The budget is tight."

In late 2012 when Schewel sold The Independent Weekly, Lowenhagen took out a loan and bought the majority stake of Hopscotch from him. The two created Hopscotch Music LLC and Lowenhagen assumed all the financial risk moving forward.

Last year, Big Daddy Kane stepped in for a surprise set at Lincoln Theatre that people are still talking about and he didn't even headline. Kane had attended the very first Hopscotch and cultivated a relationship with Lowenhagen and Currin. Crowds were treated to The Breeders, who performed their album Last Splash in its entirety, on the City Plaza stage.

Booking acts can be a challenge. Lowenhagen said the festival, which releases its lineup each April, has to think ahead to what bands people will want to see in five months. For instance, the festival was fortunate when 2014 headliner Spoon's latest album They Want My Soul just dropped and has received critical praise.

'Working out of my dining room'

What started as a grassroots festival, is still very much a small endeavor. Lowenhagen and development director Jenny Hwa are the sole full-time Hopscotch employees. They don't work out of a corporate office either. Hopscotch's headquarters are Lowenhagen's dining room. While sponsors have helped offset costs, Lowenhagen said all of the financial burden falls on himself. Aside from ticket sales, Lowenhagen said that Hopscotch does not get any percentage of venue food or beverage sales.

Lowenhagen said this year's festival's expense budget is roughly $800,000. He said he'd love to see the festival evolve into offering even more, but will definitely need more funding as his original $50,000 loan is gone.

"We are working on all options including investors in the private sector and potential partnerships with the city," Lowenhagen said.

A partnership with the city wouldn't be far-fetched considering the event's economic impact.

"Hopscotch has put Raleigh on the map as a city with a vibrant music scene. Their collaborative business model with downtown merchants hosting live music has had a direct impact on their sales. Hopscotch has also had an impact on our tourism economy, because visitors from other states and other countries stay at our hotels to enjoy this great festival," Downtown Raleigh Alliance CEO David Diaz said.

The festival has proven lucrative for the city and merchants. The Greater Raleigh Convention and Visitors Bureau estimates that Hopscotch's economic impact since 2011 has been more than $2 million and that doesn't include funds spent by local festival goers. Lowenhagen estimates about 70 percent of ticket buyers are from the Triangle. Last year, tickets were purchased from fans in 42 states and as far away as Australia.

"Raleigh is a perfect match for Hopscotch. But the question for Hopscotch is, 'Will we keep selling the tickets that we need to survive?' That’s a year by year question," he said.

In honor of its fifth year, Hopscotch has unveiled its first Design Festival. This collaboration with New Kind, a Raleigh design a community-building firm, will bring more than 30 speaker sessions and presentations to the city Wednesday, Sept. 3, and Thursday, Sept. 4. Speakers will include those in the fields of graphic design, urban planning, technology, music, food, film and more.

In addition to the official sessions, there will also be workshops, a happy hour at CAM Raleigh, panel discussion at Red Hat and a concert at Lincoln Theatre. And that that's just the first day.

The annual POSTERscotch event returns this year to Hopscotch Music Festival, but it has a new home. The Raleigh Convention Center will host this print exhibition and market that highlights local artists. The convention center will also be hosting Wristband City this year.

While you are picking up your wristbands, make sure to check out, Jeff Howlett (director and producer of the documentary "A Band Called Death") will be shooting portraits of attendees and artists and making tintype photographs from the images. He will be at the convention center Sept. 3-5, 11 a.m. to 5 p.m.

SITEWork returns this year with some contemporary art projects. First up, artist and composer David Colagiovanni will be hosting "The Shredder Sessions" at Lump Gallery/Projects. The project will feature members of this year's Hopscotch lineup improvising on a kinetic sound sculpture made of paper shredders, prepared chord organs, fire-bells, hand mixers, blenders, cymbals and other devices. These sessions are free and open to the public. The second SITEWork project is from Chapel Hill musician and artist Ron Liberti, who will be showcasing dramatically-scaled graphic imagery at CAM Raleigh's main gallery and street-facing windows.

In addition to an awesome slate of day parties, Hopscotch is also partnering with Rock and Shop for a free outdoor SHOPScotch block party from noon to 5 p.m. on Saturday, Sept. 6. More than 50 vendors will be on hand and there will be two stages of live music.

No matter what the future of Hopscotch Music Festival holds, its impact on the Triangle cannot be denied.

"The first five years should go down in Raleigh history as something that really changed the culture of how we do things in Raleigh," said, Currin, who is still the music editor at The Indy. "IBMA (International Bluegrass Music Association's Wide Open festival) would not be possible without Hopscotch. It also showed that there was a lot of energy in the Triangle and Raleigh and people wanted to get excited about a larger scale music festival."

Note: WRAL's Out and About is a sponsor of this year's Hopscotch Music Fest. Look for our signs at Vintage 21 and stop by to say 'hi' during Saturday's SHOPscotch event on Fayetteville Street!