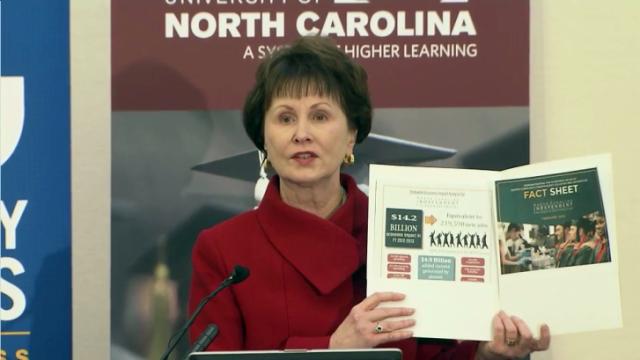 EDITOR’S NOTE: Hope Williams has served as president of North Carolina Independent Colleges and Universities, the statewide office for the state’s private non-profit institutions of higher education, since 1992.

One of the primary goals of the recent federal tax reform legislation is to encourage the creation of jobs. A 2016 study by the Center on Education and the Workforce found that 99 percent of the 11.6 million jobs created since the recession were filled by individuals with an associate’s, bachelor’s or graduate degree. These findings highlight the critical relationship between the supply of jobs and the demand for college-educated workers.

Given that relationship, it is difficult to reconcile the job creation goal of the new law with efforts during congressional negotiations to eliminate tax provisions that support and increase access to higher education.

We can only estimate the impact the tax law changes will have on charitable giving – the lifeblood of higher education’s scholarship and academic programs. The question for all nonprofits is how much the expanded standard deduction provision, without the inclusion of a universal charitable giving deduction, will reduce charitable giving.

One of the reasons this is troubling for North Carolina is the importance of charitable giving in helping provide access to college for the state’s high number of financial aid recipients. Fifty percent of North Carolina students attending our state’s private colleges and universities, and significant numbers in our public sectors, qualify for Pell Grants. These students could not attend college without these federal grants plus additional financial aid, much of which is funded through state aid and charitable gifts.

Estimates of the tax bill’s impact on charitable giving include a reduction from 30 percent of taxpayers who itemize currently to as low as five percent. The elimination of a tax incentive for 25 percent of filers to make charitable donations could be devastating to nonprofits of all types and sizes.

The excise tax on college and university endowments is a public policy change which penalizes private, nonprofit institutions for maintaining significant endowment funds to use in reducing college costs, funding student aid, and supporting research. Initially, just over 30 institutions nationwide will be taxed, but having set the policy, Congress could easily increase that number.

This tax on contributions made for charitable purposes penalizes private, nonprofit colleges and universities while public higher education and other nonprofit organizations with endowments are not affected. No charitable endowments should be taxed.

During negotiations on the tax bill, additional tax provisions affecting higher education were proposed for elimination. These included tax deductions for interest on student loans, tuition assistance for employees and graduate students, tuition tax credits and tax-exempt bonds that make it possible for private colleges and universities and other nonprofits to build and maintain physical plants. We deeply appreciate the protection of these provisions in the final bill, and it is our hope that they will remain protected in the years ahead.

North Carolina’s 36 private, nonprofit colleges and universities are valuable state resources, adding educational, cultural and economic enrichment for our citizens, enrolling more than 90,000 students and generating an economic impact of more than $14 billion annually. The number of our employees across the state combine to represent the state’s largest private employer. We award one-in-four baccalaureate degrees and one-in-three graduate and professional degrees in the state, and have many partnerships with our K-12 and public higher education colleagues as a part of North Carolina’s education continuum.

The ability to maintain a strong private higher education sector in North Carolina and across our country is directly related to public policies that encourage and support students and families who continue to seek the American Dream of a college education as a pathway to a better quality of life and a brighter future.