Hope All but Gone, Keeping Vigil for the Missing in Indonesian Earthquake 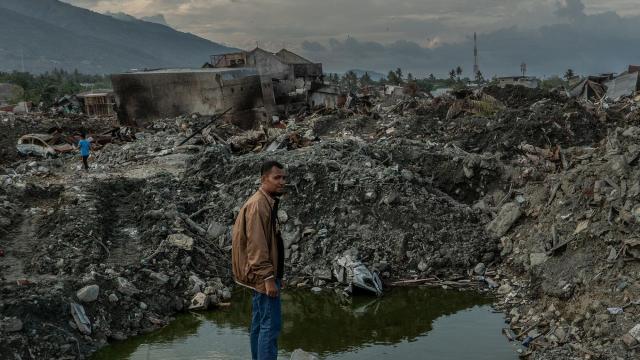 PALU, Indonesia — Two weeks after the earthquake and tsunami that devastated his neighborhood, Anjas Firmansyah is still desperate to see his wife and son.

Each day, he stands beside the heavy machinery digging deep into the muck and rubble around where his house was swallowed by the earth. Each day, rescue workers pull out bodies. He takes a hard look at each — there have been hundreds by now — half hoping he’ll recognize his 7-year-old boy and 35-year-old wife. So far, nothing.

“I have to believe he got out,” Firmansyah said of his son, standing at the edge of a destroyed minaret in the demolished neighborhood of Balaroa. “He loved the mosque, so I know he’d come here to meet me.”

But time is running out. Friday marked the final official day of large-scale operations after the Indonesian government announced that it would end the formal search for remains. Weeks in the tropical heat have turned the concerns from digging out bodies to the health of the rescue workers.

Many rescue workers and heavy equipment will remain for the next month, but the government is already drafting new construction plans.

Officials say they intend to flatten the area that was hardest hit by liquefaction — the phenomenon in which earthquakes cause the ground to flow and churn — and then pour soil and designate the place a mass grave. Eventually, one official said, it could be a park or soccer field.

“It’s time to move on,” said Haris Karimin, spokesman for the Central Sulawesi government. “We can’t keep digging just because some people are mad.”

That’s hard news for mothers, fathers, daughters, grandparents — hundreds of people like Firmansyah — who gather at the edge of the destruction each day, searching for the bodies of loved ones lost after an earthquake and tsunami tore through the city of Palu and the surrounding area on the Indonesian island of Sulawesi.

More than 2,000 people have been declared dead, and government officials have said that as many as 5,000 are still missing.

For Firmansyah and many Palu residents like him, the digging is all that is left.

One woman, Riana Asnuwari, began pleading with recovery workers after they unearthed her mother’s headscarf and motorbike from the wreckage earlier this week. “All I want is the body!” she told them, distraught.

For Indonesia, mass burials have been a recurring event. In 2004, after a 9.1 magnitude earthquake and massive tsunami devastated Aceh province, the government gathered thousands of bodies into a mass grave in the city of Banda Aceh. It’s now a park and popular tourist destination. In 2009, when a 7.6 earthquake caused massive landslides that buried entire villages near the city of Padang, they, too, were planted over and declared a memorial.

The Balaroa neighborhood of Palu was among the hardest hit by liquefaction in the earthquake Sept. 28. Extracting the bodies has been a monumental task for authorities here.

This week, excavators would dig for hours, sometimes as deep as 40 feet into the mud, to pull out whatever they could. Mostly it was car parts, torn mattresses, muddied household items — bits of everyday life. But inevitably there would be remains. Sometimes one excavator scoop would pull up five corpses huddled together. Other times, it might be just a finger.

The Palu police hospital was the collection point for hundreds of bodies pulled from the debris. Families and body identification teams would methodically unzip each bag, searching for familiar clothes, tattoos or marks. The bodies are bloated and stiff from rigor mortis. On Friday, that part of the search ended, too: Any bodies found after that were bound for the mass grave perched on a hillside on the outskirts of town.

What happens next around Palu is still unclear. Over 80,000 people had their homes destroyed. Most live in camps of makeshift plastic tents next to mosques, churches and government buildings. Officials in the Indonesian capital, Jakarta, have talked about different options for redrawing the maps to build new homes. But where the money will come from, no one yet knows.

For Firmansyah, moving on is not yet an option.

He and his oldest son, Fauzhi, are two of the more than 80,000 of the displaced. They have moved in with Firmansyah’s brother in law. But many are stuck in makeshift tent camps.

For him, the end of the formal search for remains means his chance for answers has closed.

“Either they are dead, and that will be OK, or they are still alive — and that is better,” he said. “But to wait is the hardest pain.” On the evening of Sept. 28, Firmansyah was just finishing a shower in his bathroom. His wife was checking Facebook in the room beside him, and Fauzhi had run into the yard. Then the earth rattled. He rushed naked into his backyard, knowing from years of experience with earthquakes to get into open space. His wife ran out of the other side of the house. He waited in the yard for the shaking to stop.

It did. Thinking the worst was over, he walked back inside to put on a towel. Before he could go to meet his wife, he heard the harsh creaking of metal and bending of wood.

“It sounded like the house was being pulled apart,” he said.

The floor tore out beneath him, and a wave of mud pushed him up into the ceiling. Shoved up into the tin roof, his leg was caught and crushed in the broken wood. Panicked, he shouldered his way through, he recalled.

With a few heaves, he was outside and free — and looking at his entire neighborhood sliding around him.

“The mosque looked as if it were floating toward me. I could never have dreamed to see it,” he said.

He hadn’t gone up, the house had sunk down. It was completely swallowed up. He called out for his family. Only Fauzhi responded.

Since then, Firmansyah has tried to hold onto the hope that Fajar somehow made it outside. For his wife, he is less optimistic.