Bald Head Island, N.C. — A large fire broke out on Bald Head Island on Saturday at around 8 p.m.. Three units in Lighthouse Landing and one home were destroyed in the fire.

Drone video provided to WRAL News showed large areas reduced to ashes in the aftermath of the blaze.

The massive fire took 60 firefighters to put out.

Alan May, director of Bald Head Island Public Safety, said both firefighters and neighbors did their part to prevent it from becoming worse.

While flames scorched through the four homes and trees, neighbors were dousing the untouched properties in case the embers flew too far. 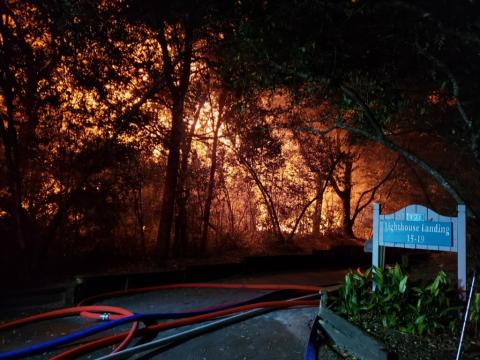 And the call to action didn't stop there.

"They stopped what they were doing. They went to the golf course. They started hosing people's homes," said Allison George, an employee at Island Time Medical on the island. "We had island businesses step up and feed our firemen well into two or three in the morning."

Jim Daughtery helps run Jule's Salty Grub and Island Pub, and when his boss called him to help feed first responders last night he said his team got to work.

"Just to give them a bite to eat and some energy seemed like a good idea," said Daughtery. "Kitchen was still open. We just kinda threw some stuff together and put it together so we could get it to them."

The Bald Head Island Fire brought a lot of damage and injured one firefighter.

"It just shows that they're not just going to sit there and wait for us to do something," said May.

May also says the cause of the fire is being investigated as firefighters discuss strategies to deal with something like this in the future.