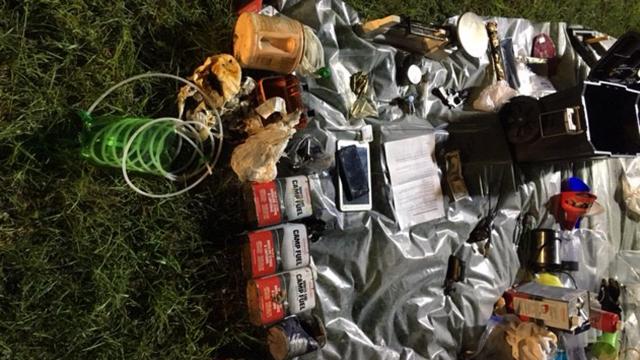 Four Oaks, N.C. — A report of a stolen weapon led Johnston County deputies to a home near Four Oaks this week where they found two homemade bombs and a methamphetamine manufacturing operation.

Jeffrey Michael Beasley, 38, told authorities last week that someone had stolen cash and a rifle from his Bass Road home. But Beasley wasn't supposed to have any firearms because he was convicted in 2014 on a felony drug charge.

When deputies went to arrest him Tuesday on a charge of being a felon in possession of a firearm, they saw materials inside the home that can be used to make meth, authorities said. A search of the home turned up not only a meth lab but also two homemade bombs.

The State Bureau of Investigation's bomb squad was called in to detonate the two devices.

Beasley was charged with possession of a weapon of mass destruction, manufacturing methamphetamines and other offenses, and he was being held Thursday in the Johnston County jail under a $550,000 bond.

The federal Bureau of Alcohol, Tobacco, Firearms and Explosives also is investigating the case.