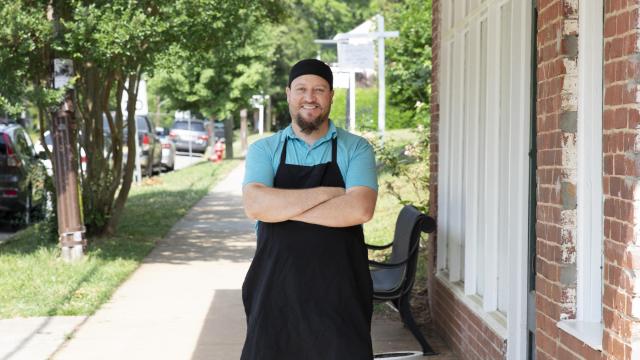 A new and used bookstore with an emphasis on local authors; a specialty yarn shop stocked with every color and thread type that you could ask for; award-winning, locally-owned restaurants every few blocks — these are things that could be found in cities with a large enough population, but not typically the variety you'd find in a small town. Yet, Hillsborough, a town of roughly 6,000 citizens, has all of this and more.

In Hillsborough, homegrown business owners like these are thriving, proving that it doesn't take big-city perks to find entrepreneurial success.

Jose Olivares knew all about the big city, but not much about Hillsborough. Originally from the San Francisco Bay area, he and his family relocated across the country knowing only one person in the entire state, Olivares' sister-in-law. Olivares had a background in culinary arts, previously running a restaurant in Texas and bouncing around the food scene during his time in California, from Italian eateries to Chinese restaurants to national chains.

Naturally, Olivares took immediate interest in what the culinary scene in Hillsborough had to offer, but noticed one glaring blind spot.

"In California, there's food trucks on every corner. We started driving around and there was not a single food truck in Hillsborough," Oliveras said. "So we decided to open up a food truck just months after moving to the area."

And thus, Tacos Los Altos was born. Although there are plenty of Mexican restaurants around the area, none of them do tacos quite like Oliveras. Drawing inspiration from the original street tacos of his hometown, the trademark taco is a simple tortilla with meat, minimal toppings and a sprinkling of cilantro, and according to Olivares, it's still the best dish on the menu.

While Olivares came to Hillsborough with no knowedlege of life in North Carolina, other local entrepreneurs found themselves coming to town as a return to their roots.

Lindsley Bowen originally hails from Monroe, but spent most of her adult life traveling around the world, calling everywhere from Chicago to South Korea home.

After spending seven years apprenticing at a vintage jewelry shop in New York City, Bowen came to a realization: all these years later, her inspiration was pulling her back to her North Carolina roots. And so, she packed her bags, headed home, and poured her passion into creating Carlisle & Linny Vintage Jewelry.

"I had been buying jewelry and found a place in a little old train caboose and rented that for my first year-and-a-half before I found a spot downtown. I started with just $800, so there was more of a process for me. I was only open nine months or eight months that first year and still worked two other jobs," Bowen said. "Now, six years later, I don't have to work any other jobs, and I'm supporting myself. I don't have a business degree, I don't read business books — it's all about figuring out what my customer wants."

For Bowen, that means providing excellent customer service the minute someone enters her shop, starting with a friendly greeting. From there, Bowen offers a quick rundown of the vintage jewelry and accessories that Carlisle & Linny has to offer, from the historic pins sent between sweethearts during World War II to retro brooches dating back to the 1950s.

Of course, Bowen will be the first to tell you that creating a successful business doesn't happen overnight. It takes time to refine the day-to-day process, and even still, it comes with its fair share of challenges.

For both Bowen and Olivares, however, the Hillsborough community has proven invaluable in helping tackle those hurdles. In fact, the local support catapulted both businesses into their current highly coveted downtown locations.

"A few months after we opened the food truck, I got a visit from a woman who ordered a taco or two, then went back to her car to eat them. About five or 10 minutes later, she came back with the bag, and my first reaction was that she had a problem with the food," Olivares said. "She actually happened to be from the Orange County newspaper, and she asked if she could write an article about my story and the food truck."

"In the article, I said that one of my dreams was to have an actual restaurant," he continued. "When the article came out, George Horton [president of Telesis Construction and licensed general contractor and Realtor], read it, liked the story, and offered me a location a few weeks later."

After initially turning down the offer due to a lack of funds, Olivares accepted another offer from Horton a little more than a year later and began getting to work on his permanent location — a prime spot just a stone's throw from downtown Hillsborough.

Just as starting a food truck comes with its own set of challenges, establishing a brick-and-mortar location came with even more. Again, Oliveras and his team were able to rely on the support of the Hillsborough community as they found their footing.

"When the restaurant first opened, we didn't have enough money to cover the cost of advertising, so we talked to the customers about helping to spread the word. They told their friends, posted on social media, and kept coming back to help out however they could," Olivares said. "Actually, we didn't have enough money for a liquor license at first, and a lot of people would walk out after they found out. Believe it or not, one of the customers offered to help us secure it. We also had this family from Hillsborough who heard from one of their neighbors that we needed help covering expenses. They came in to try my food, liked my cooking, and ever since, they've kept coming back and are helping out however they can."

For Bowen, the experience was much the same. While the Hillsborough community has always supported her work in the shop, helping her cut costs through word-of-mouth advertising and showing support on social media, the most recent pivot to virtual shopping brought to light just how much of an impact their support has.

"It is all about local, local, local here. If you're local and they live here, they want to support you," Bowen said. "What's interesting is now that the store can't be open because of the quarantine, I'm selling online through Facebook and Instagram, and the ones supporting me are my locals. It's really North Carolina that's keeping me going."

Bowen doesn't take this support from the community lightly. In fact, she seeks out opportunities to give back as often as she can, whether it's decorating a float for the Christmas parade, volunteering for Meals on Wheels, or sponsoring the new Hillsborough Urban Garden project.

Similar to Bowen, Olivares can't sing the praises of the community enough. In many ways, the rich entrepreneurial atmosphere in Hillsborough wouldn't exist without the uniquely fervent support that the community provides.

With so much growth already behind them, Olivares and Bowen have one common goal moving forward: leveraging their success to bring more jobs to the Hillsborough community.

"The entire town has taken me in. We're pretty close — almost like a family," Olivares said. "Now, our goal is to hire local people and pay them enough to where they can survive in Hillsborough, to pay their rent and have some money left over still."

Added Bowen, "If you've decided to open a small business and you're in the community, it's not just about making money, it's how you reach out to your community. As I grow, I want to be able to hire more employees, help people bring in income and create more local jobs."