Holidays can be a lonely, difficult time for veterans, military families 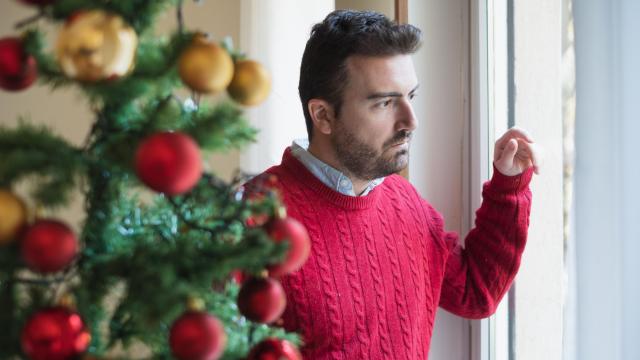 The holidays are often a joyous time for many — full of festivities, time with family, and the hustle and bustle that comes along with the season.

However, sometimes it can be a challenging period when a person may not feel up to celebratory company. The holidays can even be a lonely time for those who are separated from beloved family and friends.

"It's the most wonderful time of the year" may not ring especially true for some veterans, active-duty military members and their families. These groups can be susceptible to feelings of sadness, confusion and isolation during this time as a result of their experiences, distance or time away related to their service.

For those suffering with post-traumatic stress disorder, social events, loud noises and other things related to the holidays can be overwhelming at the least and triggering at the worst.

Bigger said family members can also ask the veterans and military people in their lives if there is anything they can do to help or how they can best serve them during a challenging time.

While difficult to statistically quantify PTSD in veterans with exactness, it does vary by service area.

According to the United States Department of Veterans Affairs and the National Center for PTSD, between 11 and 20 percent of veterans who served in either Operations Iraqi Freedom or Enduring Freedom have PTSD in a given year. It is estimated that 30 percent of Vietnam War veterans have experienced PTSD in their lifetime.

Roughly half of the patients that the Steven A. Cohen Military Clinic at Cape Fear Valley sees on a daily basis suffer from PTSD. The Cohen Clinic is an outpatient behavioral health clinic that treats veterans and their families for short-term mental health issues regardless of discharge status, role while in uniform or combat experience.

"The focus is not on people that have psychotic disorders such as schizophrenia or anything that's considered a severe persistent mental illness. It's more focused on PTSD, adjustment disorders, depression, and anxiety," Bigger explained. "Stuff that people can normally function in society [with] on an outpatient basis while they're receiving the treatment."

The Cohen Clinic doesn't treat active-duty soldiers but it does treat their family members.

"If a service member is deployed and a spouse is struggling with that," Bigger said. "We will work with the spouse or the children and help them with the adjustments of having somebody deployed."

PTSD, deployment and the residual effects of being in the service can have an impact on the entire family.

Bigger noted the struggles of being away from loved ones for long periods of time, adjusting to life without that person, and then having to reintroduce that person back into daily life as a common situation for families.

"It is especially hard for the children who are very young when their mom or dad has been deployed that they don't recognize their father or mother when they get back," Bigger said. "There is a readjustment and learning period that goes on when a deployed person is reintroduced into his or her family's daily life. Additionally, as families adjust, the veteran or service member is also adjusting. He or she may be getting reacclimated into civilian life, while also struggling with the traumatic experiences they witnessed overseas."

When a loved one is suffering from PTSD it can be hard to know how to act around them for fear of startling them or making them uncomfortable.

"It can have a huge impact on the family," Bigger said. "So a lot of family members feel like they simply can't be themselves. That creates a whole set of stressors for that family member."

Although PTSD is not uncommon in veterans and military members, there is still a stigma attached to mental illness. Bigger said one veteran confessed to him that he didn't want to be seen as the "weak link in the chain" but then realized the strongest thing he ever did was seek help.

"I try to encourage people to do everything they can to move beyond that stigma," Bigger cautioned.

The true spirit of the holiday season consists of caring about those around you. For those struggling around the holidays, especially veterans and military members with PTSD and other issues, Bigger encourages "compassion, understanding and communication."

And for those in the Fayetteville and Fort Bragg area who need professional help, there is the Cohen Clinic offering its support.

"When a veteran walks in, they feel the patriotism," Bigger said. "They feel the respect that we have for veterans that have served our country. We really focus on giving them an environment where it's safe for them to come in and share their experiences."