Holiday memories: When Crabtree had a two-story fountain and a secret shop 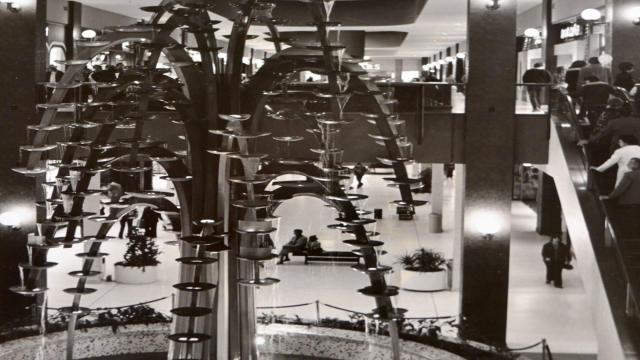 If you were born or moved to Raleigh after 1985, you likely have no memory of the iconic metal fountain that once symbolized shopping at Crabtree Valley Mall.

There was a time when celebrating Christmas in Raleigh meant a visit to see Snow Bear, who wandered Thalhimers giving out hugs and stickers.

Children could visit The Secret Shop – a magical place where even a kid's allowance money and pocket change was enough to afford holiday gifts for parents and loved ones.

Then, after a long day of shopping, you'd wait in the long line at Piccadilly Cafeteria to eat a drowsiness-inducing dinner.

Born in the 1980s, I remember Snow Bear and Piccadilly – but I missed seeing The Secret Shop or the enormous fountain so many people remember.

But my mother told me, "There was once a life-sized 'Crab Tree' sculpture inside the mall."

Only a handful of black and white photos remain – fading like so many holiday memories.

Ever since then, I believed the fountain was meant to resemble a 'Crab Tree' – and while it apparently wasn't actually meant to be a tree, you almost can't blame a 15-year-old version of my mother from imagining that's what it was meant to be. The metal fountain sculpture paid a remarkable resemblance to the Crabtree Valley Mall logo from that era, as seen in this flashback Friday photo shared on Crabtree's Facebook page.'

And certainly many children have asked their own parents throughout the years: What exactly is a 'Crab Tree?'

Sadly, Raleigh has lost many important pieces of history or pop culture simply because everyone in the 1970s and 80s didn't carry cameras in their pockets. The Triangle area regularly loses images of previously iconic places and things simply because no one thought to snap a photo.

Fortunately, photographer Betty Austin Owen was working at the mall over the summer of 1972 while taking a photography course as an art major at East Carolina University. 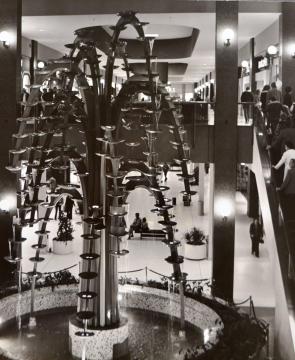 "I took my camera with me everywhere I went," she said. "Still do! Only now it's an iPhone."

Owen was working at the Hobby Shop when the mall first opened its doors in 1972.

"I remember when Crabtree Mall opened, and of course it was an amazing place to shop. I was off at college during the year, but spent my summers back home in Raleigh," she said.

She recalls holiday traditions like seeing the Christmas lights on Kidd Brewer's house on the hill behind the mall.

Hidden atop Kidd's Hill: The changing view of Belle Acres and Crabtree Valley

Newspaper articles from the 1970s hint at why the fountain may have eventually been removed.

"The original pool was too small to catch all the water that cascaded from the fountain, which stands almost two stories," said an article in the News & Observer.

"This frequently resulted in soggy customers," according to the article.

Likewise, the sound of the rushing water was reportedly noisy.

Renovations in the mid-1980s spelled the end for the fountain, which had perhaps lost enough goodwill with customers and the mall alike.

Both North Hills Mall and Cary Towne Center also had large, iconic trees – now mostly forgotten – that were once associated with their branding.

Back when it was known as Cary Village Mall, a very large, majestic oak tree stood outside Cary Towne Center. Its sprawling branches and thick trunk made it iconic, and it was worked into the logo. 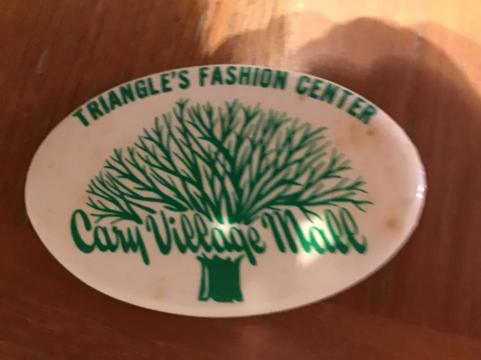 Sadly, much like the Crabtree fountain, the oak was eventually destroyed. Although its destruction was met with protest and outrage, the historic tree has mostly faded from public memory – with only a handful of faded photos remaining.

Likewise, some locals vaguely recall a large sculpture that once stood outside North Hills. It had been carved into a life-sized tree trunk.

Share your memories and photos of the holidays in Raleigh

Crabtree Valley Mall wasn't the only mall working hard to create memorable moments during the holidays. South Hills Mall in Cary brought real-life reindeer for children to photograph, feed and pet in the late 1980s and 1990s.

As more holiday shopping shifts online, those seasonal memories are slowly shifting away from shopping malls.

Do you have any old-fashioned holiday nostalgia to share from celebrating Christmas in Raleigh? Share your memories and photos with WRAL's Hidden Historian at hleah@wral.com.