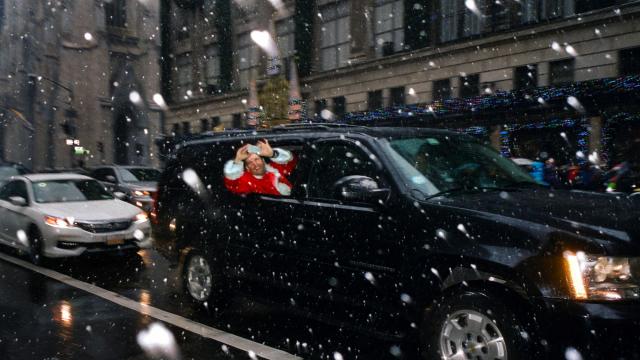 NEW YORK — For many adults, this time of the year is dominated by to-dos: buying thoughtful gifts, decorating the house, wrapping up work projects before vacation, practicing self-control around food and drinks and the crazy uncle you’d love to tell off.

Try to remember how it used to be. The holidays shimmered with the light of kinaras and menorahs, the reflective sheen of Christmas ornaments, oily pans frying latkes, and the iced tops of homemade cookies.

“There’s this excuse to lean back into your childhood love of the world and reconnect to the wonder of being a little kid,” said Daniel Arnold, a photographer whose family combined Jewish and Christian traditions during the holidays of his youth.

With childlike optimism and nostalgia, Arnold headed to the epicenter of seasonal cheer and consumerism, Fifth Avenue. (Those seeking pure cheer should consider a trip to see the decked-out houses in the Dyker Heights section of Brooklyn instead.)

He found that the romance of year-end New York City, depicted in films including “When Harry Met Sally,” “Miracle on 34th Street” and “Home Alone 2,” was overshadowed by the crowds of people trying to get a glimpse of the “Snow White and the Seven Dwarfs"-themed windows at Saks Fifth Avenue and taking pictures with the Rockefeller Center Christmas tree.

“You feel the energy of the city in a very localized and immediate way,” Arnold said.

Tiffany’s! Bergdorf’s! Henri Bendel! That guy selling counterfeit handbags on the corner! Fifth Avenue is basically the “Disneyland of shopping,” Arnold said. Even if you came for the lighting of the tree, it is almost impossible not to take stock of the goodies in the windows, which have come to represent some of our wildest shopping fantasies.

Recent Pew Research Center surveys found that while 90 percent of Americans celebrate Christmas, 56 percent of them believe that the holiday figures less religiously in our collective consciousness than ever before. The only nonsecular symbol that struck Arnold was a manger that he saw being carried into St. Patrick’s Cathedral.

“It’s very hard to find any direct connection to religion,” Arnold said. “You want to be as inclusive as possible.”

Inclusivity means embracing and expressing the many faiths of New Yorkers. It also means welcoming the tourists who flock to Fifth Avenue.

“You understand your surroundings in a totally new way when a replacement population comes and looks at it with you,” Arnold said. “It’s just like the Emerald City of people’s fantasies.”

Many New Yorkers are prone to frustration with slow walkers and the people who insist on taking pictures with their iPads. But those who brave Fifth Avenue at this time of year have no choice but to move with the masses at a pace that Arnold likened to molasses.

“In a way, that connects back to the relief of Christmas,” Arnold said. “You get the opportunity to snap out of your routine and take a step back. It’s like you get momentarily relieved of all the nonsense of the year and are like, ‘Who cares? It’s Christmas again.'”