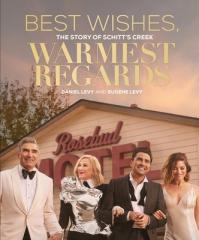 Best Wishes, Warmest Regards : The Story of Schitt's Creek by Daniel & Eugene Levy
This beautifully produced, keepsake coffee-table book is the ultimate celebration of the series, the town, the characters, and the state of mind that is Schitt's Creek. Capturing the essence and alchemy of all six seasons of what is now considered to be one of the most groundbreaking comedy television series of the last decade, Best Wishes, Warmest Regards is a gift to fans everywhere who have made the show their own. 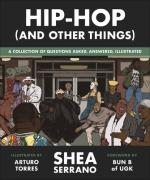 Hayao Miyazaki
This book is the first ever retrospective dedicated to the legendary filmmaker in North America and introduces hundreds of original production materials, including artworks never before seen outside of Studio Ghibli's archives. Concept sketches, character designs, storyboards, layouts, backgrounds and production cels from his early career through all 11 of his feature films offer insight into Miyazaki's creative process and masterful animation techniques.

The Lyrics: 1956 to the Present by Paul McCartney
A work of unparalleled candor and splendorous beauty, The Lyrics celebrates the creative life and the musical genius of Paul McCartney through 154 of his most meaningful songs. With images from McCartney’s personal archives—handwritten texts, paintings, and photographs, hundreds previously unseen—The Lyrics, spanning sixty-four years, becomes the definitive literary and visual record of one of the greatest songwriters of all time.

Bibliophile: Diverse Spines
This richly illustrated and vastly inclusive collection uplifts the works of authors who are often underrepresented in the literary world. Using their keen knowledge and deep love for all things literary, coauthors Jamise Harper (founder of the Diverse Spines book community) and Jane Mount (author of Bibliophile) collaborated to create an essential volume filled with treasures for every reader. 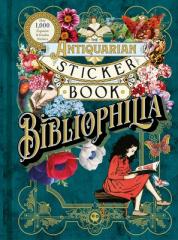 The Antiquarian Sticker Book: Bibliophilia
Here, quotes from classic pieces of literature are illuminated in sticker form. Adorn your journal with a quote or sticker to add another dimension to your project. Peel and decorate or browse and feast on the beauty of this lush sticker book unlike any other. A treasure trove of authentic historical prints from the ornate Victorian era can live on its own, be used on stationary and wrapping, or create an amazing collage.

Around the World in 80 Books : A Literary Journey
To chart the expansive landscape of world literature today, Damrosch explores how writers live in two very different worlds: the world of their personal experience and the world of books that have enabled great writers to give shape and meaning to their lives. In his literary cartography, Damrosch includes compelling contemporary works as well as perennial classics, hard-bitten crime fiction as well as haunting works of fantasy, and the formative tales that introduce us as children to the world we’re entering. 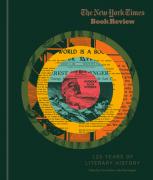 The New York Times Book Review : 125 Years of Literary History
Brimming with remarkable reportage and photography, this beautiful book collects interesting reviews, never-before-heard anecdotes about famous writers, and spicy letter exchanges. Here are the first takes on novels we now consider masterpieces, including a long-forgotten pan of Anne of Green Gables and a rave of Mrs. Dalloway, along with reviews and essays by Langston Hughes, Eudora Welty, James Baldwin, Nora Ephron, and more.

Shelf Life: Chronicles of a Cairo Bookseller by Nadia Wassef
In 2002, with her sister, Hind, and their friend, Nihal, she founded Diwan, a fiercely independent bookstore. They were three young women with no business degrees, no formal training, and nothing to lose. At the time, nothing like Diwan existed in Egypt. Culture was languishing under government mismanagement, and books were considered a luxury, not a necessity. Ten years later, Diwan had become a rousing success, with ten locations, 150 employees, and a fervent fan base. 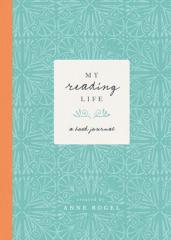 My Reading Life: A Book Journal by Anne Bogel
Anne Bogel provides you with insightful reading lists for every popular genre and each season. She even helps you determine the kinds of books you'd most like to read based on your interests. You'll also appreciate the sleek, compact design, perfect for taking on the go to the library, bookstore, or your next book club gathering. So much more than just a journal, this book is a joyful celebration of the written word, one that will significantly enrich every day of your reading life.

Black Food : Stories, Art, and Recipes from Across the African Diaspora edited by Bryant Terry
In this stunning and deeply heartfelt tribute to Black culinary ingenuity, Bryant Terry captures the broad and divergent voices of the African Diaspora through the prism of food. With contributions from more than 100 Black cultural luminaries from around the globe, the book moves through chapters exploring parts of the Black experience, from Homeland to Migration, Spirituality to Black Future, offering delicious recipes, moving essays, and arresting artwork. 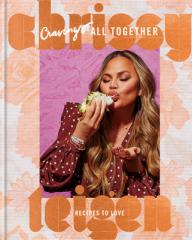 Cravings: All Together : Recipes to Love by Chrissy Teigen
Chrissy Teigen has always found a big sense of fun in the kitchen, but more than ever, she turns to the stove for comfort and warmth. Now Chrissy shares the recipes that have sustained her and her family, the ones that made her feel like everything is going to be okay. Recipes for Cozy Classic Red Lentil Soup, ingenious Chrissy signatures like Stuffed PB&J French Toast and puff pastry–wrapped Meatloaf Wellington, and family favorites like her mom Pepper’s Thai-style Sloppy Joes and John’s Saturday-morning Blueberry Buttermilk Pancakes will have you feeling like you’re pulling up a chair to her table.

Southern Grit : 100+ Down-Home Recipes for the Modern Cook by Kelsey Barnard Clark
In Southern Grit, Kelsey Barnard Clark presents more than 100 recipes that are made to be shared with family and friends. Indulge your loved ones in delicious modern Southern meals, including Bomb Nachos, Savannah Peach Sangria, Roasted Chicken and Drippin' Veggies, and six variations of Icebox Cookies. 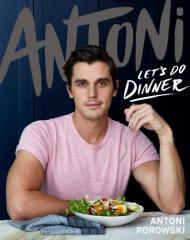 Antoni: Let’s Do Dinner by Antoni Porowski
Pulled chicken nachos, pasta carbonara with scallions and peas, or pan-seared steak with harissa butter and crispy potatoes—it’s all good for post-work evenings or casual entertaining. Antoni shows how to crank the flavor, make exciting suppers from pantry staples, create new takes on classics by swapping in one surprising ingredient, and build a rousingly flavored vegan grain bowl. Plus, he lets you in on the secret weapons in every kitchen that get great food on the table fast.

Celebrate with Kim-Joy : Cute Cakes and Bakes to Make Every Occasion Joyful by Kim-Joy
Let Kim-Joy and her signature cuteness brighten your celebrations. From birthday cakes to year-round events, all occasions are covered! The 60 sweet recipes are bursting with color, imagination and fun and there's something for everyone, no matter what their baking skills. This joyful collection of recipes includes all the step-by-step photography, clear instructions and words of positivity you need to learn to bake and decorate just like Kim-Joy.