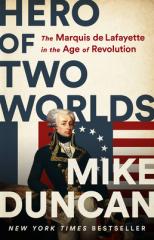 Hero of Two Worlds : The Marquis de Lafayette in the Age of Revolution by Mike Duncan
Few in history can match the revolutionary career of the Marquis de Lafayette. Over fifty incredible years at the heart of the Age of Revolution, he fought courageously on both sides of the Atlantic. He was a soldier, statesman, idealist, philanthropist, and abolitionist. From enthusiastic youth to world-weary old age, from the pinnacle of glory to the depths of despair, Lafayette never stopped fighting for the rights of all mankind. His remarkable life is the story of where we come from, and an inspiration to defend the ideals he held dear.

Travels with George: In Search of Washington and His Legacy by Nathaniel Philbrick
Written at a moment when America's founding figures are under increasing scrutiny, Travels with George grapples bluntly and honestly with Washington's legacy as a man of the people, a reluctant president, and a plantation owner who held people in slavery. At historic houses and landmarks, Philbrick reports on the reinterpretations at work as he meets reenactors, tour guides, and other keepers of history's flame. He paints a picture of eighteenth century America as divided and fraught as it is today, and he comes to understand how Washington compelled, enticed, stood up to, and listened to the many different people he met along the way—and how his all-consuming belief in the Union helped to forge a nation. 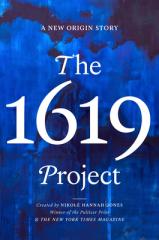 The 1619 Project : A New Origin Story edited by Nikole Hannah-Jones
The New York Times Magazine’s award-winning “1619 Project” issue reframed our understanding of American history by placing slavery and its continuing legacy at the center of our national narrative. This new book substantially expands on that work, weaving together eighteen essays that explore the legacy of slavery in present-day America with thirty-six poems and works of fiction that illuminate key moments of oppression, struggle, and resistance. The essays show how the inheritance of 1619 reaches into every part of contemporary American society, from politics, music, diet, traffic, and citizenship to capitalism, religion, and our democracy itself.

Oscar Wilde: A Life by Matthew Sturgis
The fullest, most textural, most accurate—most human—account of Oscar Wilde's unique and dazzling life—based on extensive new research and newly discovered materials, from Wilde's personal letters and transcripts of his first trial to newly uncovered papers of his early romantic (and dangerous) escapades and the two-year prison term that shattered his soul and his life. 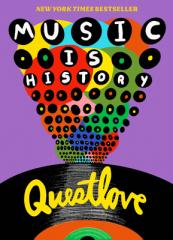 Music Is History by Questlove
In Music Is History, Questlove harnesses his encyclopedic knowledge of popular music and his deep curiosity about history to examine America over the past fifty years. Choosing one essential track from each year, Questlove unpacks each song’s significance, revealing the pivotal role that American music plays around issues of race, gender, politics, and identity. Music Is History is filled with and informed by Questlove’s preferences, perspectives, and particularities. It feels like both a popular history of contemporary America and a conversation with one of music's most influential and unique voices.

The Taking of Jemima Boone : Colonial Settlers, Tribal Nations, and the Kidnap That Shaped America by Matthew Pearl
Matthew Pearl explores the little-known true story of the kidnapping of legendary pioneer Daniel Boone’s daughter and the dramatic aftermath that rippled across the nation. In this enthralling narrative, Pearl unearths a forgotten and dramatic series of events from early in the Revolutionary War that opens a window into America’s transition from colony to nation, with the heavy moral costs incurred amid shocking new alliances and betrayals. 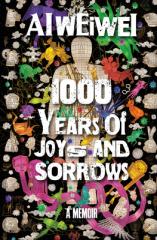 1000 Years of Joys and Sorrows : A Memoir by Ai Weiwei
Ai Weiwei’s sculptures and installations have been viewed by millions around the globe, and his architectural achievements include helping to design the iconic Bird’s Nest Olympic Stadium in Beijing. His political activism has long made him a target of the Chinese authorities, which culminated in months of secret detention without charge in 2011. Here, for the first time, Ai Weiwei explores the origins of his exceptional creativity and passionate political beliefs through his life story and that of his father, whose creativity was stifled.

Beautiful Country: A Memoir by Qian Julie Wang
Inhabiting her childhood perspective with exquisite lyric clarity and unforgettable charm and strength, Qian Julie Wang has penned an essential American story about a family fracturing under the weight of invisibility, and a girl coming of age in the shadows, who never stops seeking the light. 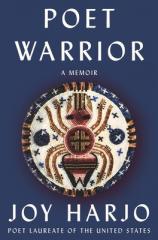 Poet Warrior: A Memoir by Joy Harjo
Joy Harjo, the first Native American to serve as U.S. poet laureate, invites us to travel along the heartaches, losses, and humble realizations of her "poet-warrior" road. A musical, kaleidoscopic, and wise follow-up to Crazy Brave, Poet Warrior reveals how Harjo came to write poetry of compassion and healing, poetry with the power to unearth the truth and demand justice.

The Boys: A Memoir of Hollywood and Family by Ron Howard & Clint Howard
Happy Days, The Andy Griffith Show, Gentle Ben—these shows captivated millions of TV viewers in the ’60s and ’70s. Join award-winning filmmaker Ron Howard and audience-favorite actor Clint Howard as they frankly and fondly share their unusual family story of navigating and surviving life as sibling child actors. By turns confessional, nostalgic, heartwarming, and harrowing, The Boys is a dual narrative that lifts the lid on the Howard brothers’ closely held lives. 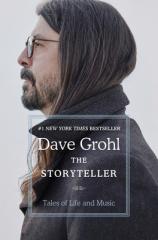 The Storyteller: Tales of Life and Music by Dave Grohl
From hitting the road with Scream at 18 years old, to his time in Nirvana and the Foo Fighters, jamming with Iggy Pop or playing at the Academy Awards or dancing with AC/DC and the Preservation Hall Jazz Band, drumming for Tom Petty or meeting Sir Paul McCartney at Royal Albert Hall, bedtime stories with Joan Jett or a chance meeting with Little Richard, to flying halfway around the world for one epic night with his daughters…the list goes on.

Hooked: How Crafting Saved My Life by Sutton Foster
Whether she’s playing a book editor on television or dazzling audiences on the Broadway stage, Sutton Foster manages to make it all look easy. How? Crafting. From the moment she picked up a cross stitch needle to escape the bullying chorus girls in her early performing days, she was hooked. Cross stitching led to crocheting, crocheting led to collages, which led to drawing, and so much more. Channeling her emotions into her creations centered Sutton as she navigated the significant moments in her life and gave her tangible reminders of her experiences. 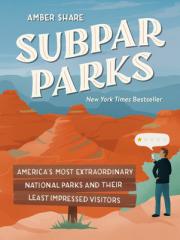 Subpar Parks: America's Most Extraordinary National Parks and Their Least Impressed Visitors by Amber Share
Subpar Parks combines two things that seem like they might not work together yet somehow harmonize perfectly: beautiful illustrations and informative, amusing text celebrating each national park paired with the one-star reviews disappointed tourists have left online. Millions of visitors each year enjoy Glacier National Park, but for one visitor, it was simply "Too cold for me!" Never mind the person who visited the thermal pools at Yellowstone National Park and left thinking, “Save yourself some money, boil some water at home.”

Fuzz: When Nature Breaks the Law by Mary Roach
Combining little-known forensic science and conservation genetics with a motley cast of laser scarecrows, langur impersonators, and trespassing squirrels, Roach reveals as much about humanity as about nature’s lawbreakers. When it comes to "problem" wildlife, she finds, humans are more often the problem—and the solution. Fascinating, witty, and humane, Fuzz offers hope for compassionate coexistence in our ever-expanding human habitat. 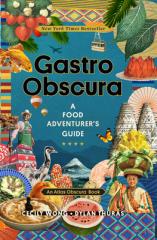 Gastro Obscura : A Food Adventurer's Guide by Cecily Wong and Dylan Thuras
Created by the ever-curious minds behind Atlas Obscura, this breathtaking guide transforms our sense of what people around the world eat and drink. Covering all seven continents, Gastro Obscura serves up a loaded plate of incredible ingredients, food adventures, and edible wonders. But far more than a menu of curious minds delicacies and unexpected dishes, Gastro Obscura reveals food’s central place in our lives as well as our bellies, touching on history, culture, travel, festivals, and hidden gems that might be right around the corner, like the vending machine in Texas dispensing full sized pecan pies. Dig in and feed your sense of wonder.

Murakami T : The T-Shirts I Love by Haruki Murakami
In Murakami T, the famously reclusive novelist shows us his T-shirts—including gems from the Springsteen on Broadway show in NYC, to the Beach Boys concert in Honolulu, to the shirt that inspired the beloved short story “Tony Takitani.” Accompanied by short, frank essays that have been translated into English for the first time, these photographs reveal much about Murakami's multifaceted and wonderfully eccentric persona. 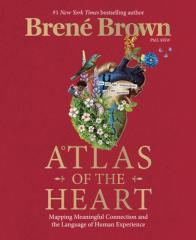 Atlas of the Heart: Mapping Meaningful Connection and the Language of Human Experience by Brene Brown
In Atlas of the Heart, Brown takes us on a journey through eighty-seven of the emotions and experiences that define what it means to be human. As she maps the necessary skills and an actionable framework for meaningful connection, she gives us the language and tools to access a universe of new choices and second chances—a universe where we can share and steward the stories of our bravest and most heartbreaking moments with one another in a way that builds connection.

The Baseball 100 by Joe Posnanski
The Baseball 100 treats readers to the whole rich pageant of baseball history in a single volume. Chapter by chapter, Posnanski invites readers to examine common lore with brand-new eyes and learn stories that have long gone unheard. The epic and often emotional reading experience mirrors Posnanski’s personal odyssey to capture the history and glory of baseball like no one else, fueled by his boundless love for the sport.