Durham, N.C. — A contemporary movement in Durham sees parallels with a time in the city's history, from the late 19th century into the early 20th century, when African-American entrepreneurs built a successful community despite Jim Crow.

Durham's Black Wall Street was a time of thriving black communities from the late 1800s through the 1930s. The district flourished primarily along Parrish Street and the Hayti community.

If anyone knows Durham’s Black Wall Street, it’s Eileen Welch, the director of Durham's Colored Library and great-granddaughter of both Aaron Moore and John Merrick.

Together, Moore and Merrick founded North Carolina Mutual Life Insurance Company in 1898. Along with Charles Clinton Spalding, they are considered two of the “founding fathers” of Durham's Black Wall Street.

They were men coming of age against incredible odds.

“So John Merrick came to Durham when he was 26 years old, after having been born in slavery,” said Welch. “(Moore’s) grandfather was a manumitted slave, which means he was freed, probably as the son of the master.”

Grit, determination and vision were the basic ingredients of the inception of Durham’s Black Wall Street.

“They had a nice cohort of African-American men who came together with different skill sets who said, 'Let’s make this place better,' and they began,” said Welch. 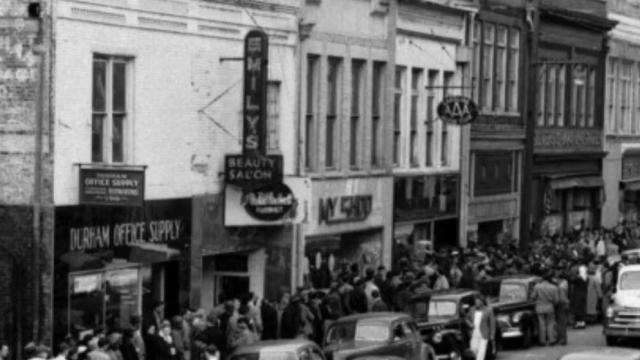 Before long, North Carolina Mutual was one of the most influential African American-owned businesses in the country. Lincoln Hospital for Negros came soon after, in 1901. Mechanics and Farmers Bank and the Colored Library of Durham followed.

Moore, Merrick and Spaulding all had a hand in growing a successful African-American community insulated from the insults of Jim Crow.

“I'm proud of what they did. I'm proud of the businesses they spawned and the opportunities people came here to take advantage of,” said Welch.

Black Wall Street instilled pride in young, provided for all

State Representative Mickey Michaux, now 88 years old, also has strong personal ties to Durham’s history. He’s a native son and product of the Black Wall Street era. He says it instilled a sense of pride for him as a young boy.

“You didn't have to come across the tracks to the white community to do anything. We had everything in our own community,” said Michaux.

Michaux’s father had a property management company that Michaux started working for at the age of 10.

“You knew that you were segregated. You knew that the other side did not particularly like you or care for you. But then I can look back and thumb my nose at the other group because we had it on our side,” he said. “We could do anything they could do. We could provide. Furniture store, five and dime store, grocery store, shoe shops. All of these things we had as a result of the totality of Black Wall Street.”

“(N.C. Highway) 147 was built right through town and destroyed our houses, our homes and the smaller businesses,” said Welch.

But Michaux said the forced changes had a silver lining.

“We began to integrate into and move into other areas where we didn’t have to count solely on ourselves and spread our wings," he said. "The basic roots of Black Walk Street helped us to transition into other societies.”

Firms owned by black businessmen and women made up a signficant percentage of all firms in Durham, N.C., in 2012, according to an analysis by WRAL News.

Despite modern challenges, Welch and Michaux can still see and feel Black Wall Street in the Bull City. According to the U.S. Census Bureau’s Survey of Business Owners, that’s not just sentiment. There are numbers to back it up.

Dr. Nicole Swiner is a Durham-based family practitioner, publisher and consultant. She says there's a rejuvenation of black success, and Durham is a hotbed for it.

“This history is rich, and I'm really, really proud, particularly at this moment when there seems to be a Renaissance and a rejuvenation of that history and its culture,” said Swiner.

She’s been practicing medicine in Durham for 10 years but fell in love with the city years ago as an undergraduate at Duke University. She says the more she’s learned about the history of Black Wall Street, the more she wants to contribute to its legacy.

“We're bringing back some of that old-fashioned love for Durham and creating some of those things that we wanted to be and we want the nation and world to know about us,” she said.

Swiner points to other young professionals making moves in Durham, like those responsible for Black Wall Street Homecoming – an annual networking conference for entrepreneurs.

Tobias Rose is one of the of the organizers of BWS Homecoming. He’s also the founder and CEO of Kompleks Creative, a graphics, web design and business strategy firm. Coincidentally, his business is located on Parrish Street.

As for Rose’s vision, he said the possibilities for Durham’s Black Wall Street are endless.

“My vision for young entrepreneurs of Durham is the same for old entrepreneurs. I want to position them so they don't have limits in building whatever it is they want to,” he said.

He said it’s important for young up-and-comers to know the history and allow themselves to be inspired.

“The difference in what we do and the way we do it is that it's an extension of our community," he said. "It's cross-generational. In building a cross-generational economic ecosystem, you learn from each other, educate each other and help build each other up. Supporting the greater ecosystem and building on to that ecosystem is our vision. We want the young entrepreneurs to listen, build and support each other. I want them to be proud of who they are and use it as one of their most valuable assets in building something for the young entrepreneurs that aren't born yet.”

Another generation has the torch, but Welch said the spirit of Wall Street transcends time and cultural changes.

“If these stories don’t get told, and researched thoroughly and told correctly now, the people who can tell you the facts are going to be gone,” said Welch. “So for people to understand the struggles people went through, the achievements they were able to make and what helped them to get there, those lessons are lessons people can take.”