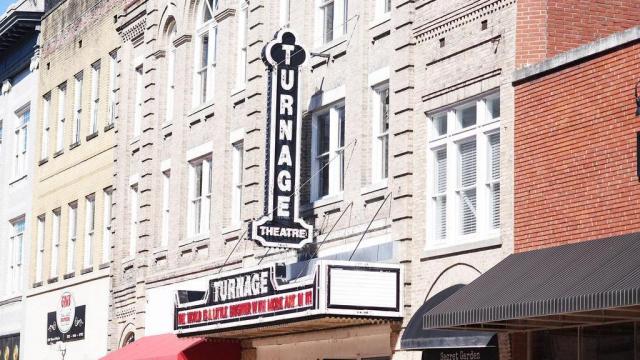 The citizens of Washington, N.C., have been raising the roof — literally — on the Historic Turnage Theatre in downtown Washington.

Thanks to a $1.3 million grant, the Turnage Theatre underwent much-needed repairs on its vaudeville theater roof, as well as other areas of the theater's interior. These renovations will open up the space in the theater and keep the landmark maintained.

"Starting in 2017 we started to see some real evidence of damage on the fifth floor to the plaster, walls and roof of the vaudeville theater," said Debra Torrence, executive director of Arts of the Pamlico, a hub of arts and cultural events and activities for both youth and adults in Eastern North Carolina. "We realized the importance of saving the roof and renovating the theater in order to preserve the building for decades to come."

"There were multiple sources that supported this project. We have a USDA Community Facility grant, received funding from three private foundations and support from the Town of Washington as a local government partner, and received individual donations of $5 and up," continued Torrence. "As a nonprofit, it's very atypical that one source supports a nonprofit, no matter how strong it is."

Roland Wyman, board chair of Arts of the Pamlico, said the AOP paid off the last of its mortgage debt two years ago and set its sights on making further improvements to the Turnage Theatre, realizing the roof was in imminent failure.

"It was a structural issue that was not going to be dealt with just by putting on a new coating on the existing roof," he said. "It was the original truss made of heavy timber — you can imagine what it was like, having sat there since 1913. It needed to be completely replaced. A contracting company came in and erected a huge crane that could be seen from anywhere in Washington and they very efficiently removed the old roof and installed a completely new steel structure."

"It was just completed in early October. It's a major milestone for us," continued Wyman. "We have a brand new roof structure that has now ensured that everything inside — all the precious contents, the old preserved vaudeville theater and the palace theater, and the art galleries and shops and everything are going to remain dry. So we have a new lease on life."

"The front of the building was originally used as a bakery and shoe store with a vaudeville playhouse on the second floor," states the Arts of the Pamlico website. "In the mid 1930s a second theatre was built, palace-style on the rear of the building. For nearly 50 years, people flocked to the Turnage Theatre. But by the 1970s, other larger movie theaters began to open in eastern North Carolina. With the neglected theater falling into disrepair, it closed its doors for the first time in 1978. Some 20 years later, a group of historic preservation enthusiasts teamed up with arts advocates to form the non-profit Turnage Theater Foundation."

Named after owner C.A. Turnage, the theater was built in two phases starting in 1913.

First constructed was the front of the building and the vaudeville space. Vaudeville is a type of entertainment that includes burlesque, comedy, song and dance made popular in the early 20th century. The second part of the theater was constructed between 1928 and 1930 when "talkies" — movies with sound, were invented.

"Turnage decided to build the second building in the back with the ability to cool it and also for it to be quieter. He installed not only a movie screen, but also a stage because he wasn't sure movies were going to survive. The second building has a 432-seat palace theater," said Torrence. "The main building that you walk in the front door off Main Street is a jewel. It's lined with chandeliers and has a theater, costume and fashion museum down the central hallway and up into the palace theater balcony. We have a large art gallery to one side and a bakery on the other side. The vaudeville theater is down the hallway and the catering kitchen is opposite of it."

Turnage Theater is one of very few in the nation that has two theaters in one building. Its largely intact vaudeville theater is also unique.

Roy Rogers, a singer and actor of the 1930s, once performed at the theater and he's only one of several bits of history the theater's walls house memories of.

Despite its longevity, the theater has seen its fair share of ups and downs over the years and has come close to shutting down.

"In the late 1960s to 1970s, Main Streets across the country were starting to wind down in preference for strip malls and that sort of thing. Washington was no different and the theater fell into disuse and laid vacant for some time," said Wyman. "In the late 1970s the theater was about to be sold off for demolition, but a group of local citizens realized that there was history to be preserved there and organized to take control of the theater and begin some renovations."

After an extensive multi-million dollar renovation, the Turnage Theater Foundation struggled to repay the $2 million borrowed to complete the process of restoring the crumbling building.

Increasing costs and dwindling support from individual and corporate sponsors shuttered the theater again in 2011. In 2013, the Turnage Theatre building was purchased by the Arts of the Pamlico (formerly the Beaufort County Arts Council) and returned to its former glory.

However, the needed roof repair is a testament that old, historic buildings need consistent upkeep.

"Many organizations and volunteers from within the community have been working on restoring and bringing the theater back to life," said Wyman. "We're standing on the shoulders of so many people who recognize what the theater means to Washington and our whole eastern North Carolina community."

The current pandemic was a blessing in disguise of sorts, allowing the theater repairs to be done while many people were working from home and patrons weren't coming into the theater while programming remained remote.

Speaking of programming, despite COVID-19 restrictions, the theater has been able to offer virtual programming like online art exhibits, a virtual youth theater, and recently did a Halloween showcase via Zoom. The AOP plans to do a similar holiday showcase this December.

"COVID dealt us kind of a blow this year, but we've been able to create a lot of neat things in place of what we originally had planned, including a virtual tour of the Turnage Theatre called Tales of the Turnage," said Torrence. "This will launch in January 2021. We're hoping to open our physical doors in December, but we'll see how things go pandemic-wise."

Looking ahead, Torrence is excited about the future and what the AOP has in store for the community of Washington and the newly renovated Turnage Theatre.

"We're hoping to bring a lot of our youth and community theater back on stage, restart comedy troops, as well as our monthly dance chapters and writers groups," said Torrence. "We're in the midst of a strategic planning process, so we're just hoping to keep cruising."