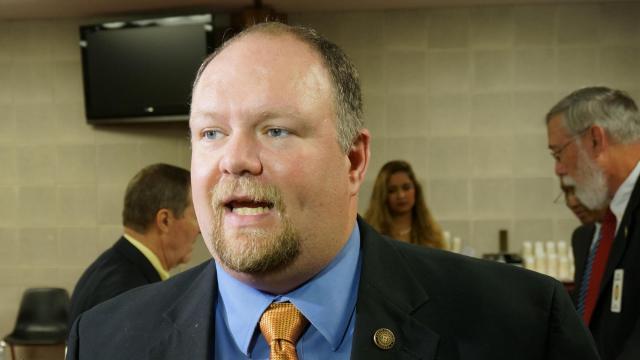 Raleigh, N.C. — Twenty months after it was filed, the State Board of Elections and Ethics Enforcement on Tuesday settled a campaign finance complaint against Sen. Ralph Hise, R-Mitchell, accepting $4,500 to conclude its investigation.

The board gave little explanation for its unanimous decision, which came after closed-session discussion. Greg Flynn, who requested the investigation after cataloging thousands of dollars in inconsistencies in Hise's reports, dubbed himself disappointed.

Hise's most recent political opponent, David Wheeler, was incensed by the decision and accused the senator of embezzlement. Hise wasn't there, but his campaign attorney, Steve Long, rose to push back.

Wheeler said later that he plans to seek a criminal investigation from one or more district attorneys, and he called the affair "corruption at its worst." Long said the problems boiled down to bad bookkeeping and that the campaign worked for months to untangle it, cooperating with state board staff at every turn.

The Republican senator's campaign will reimburse the board $4,000 for investigation expenses and pay a $500 fine, according to the settlement. That settlement does not say what the board believes happened, and board members didn't lay that out publicly.

Flynn's complaint documented a number of issues, but the most serious was this: Hise appeared to loan his campaign $10,000 less than he recouped from it in loan repayments. Long said this was just the result of accounting mistakes and reporting errors, including unreimbursed expenses from the senator's travel across his mountainous western North Carolina district that were initially classified as loans.

"At no time was there ever a payment to him for expenses that he was not owed," Long said.

The campaign has filed a number of amended reports in the nearly two years since the complaint was filed. It has also changed treasurers and accountants.

Flynn, a well-known campaign finance watchdog who was appointed to the Wake County Board of Elections this year, said those amended reports can be hard to follow and that the campaign's retroactive explanations set a troubling precedent.

The vote to accept the settlement was unanimous – and from a bipartisan board that leans Democratic. The chairman is a long-time Democrat, and the swing vote is an independent appointed by Democratic Gov. Roy Cooper.

This iteration of the board will likely cease to exist next week, due to a court order in the long-running legal battle over its makeup between Cooper and the Republican legislative majority.

Legislative leadership plans to rework the board during an ongoing General Assembly session, which began Tuesday. Hise will play a role in that as chairman of the Senate's elections committee. Board attorney Josh Lawson said the settlement would stand as something a future board could enforce.

Back and forth over the board's makeup was one of the things that delayed this investigation. At one point, the board didn't exist, though staff continued day-to-day work. Hise's campaign said it didn't hear from the board at one point for a year.

With Wheeler complaining about the outcome after the vote Tuesday, Chairman Andy Penry initially said he'd make some public comment on the decision later in the meeting. But after a second closed session, taken to discuss other matters, Penry decided against it.

"I think we were satisfied," Penry told reporters after the meeting ended. "We were sufficiently satisfied with what we heard to agree to the settlement proposal."